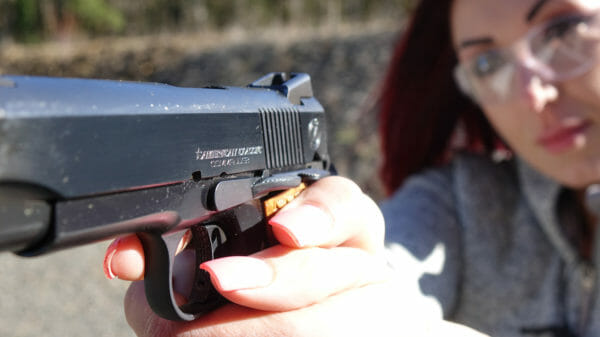 USA – -(Ammoland.com)- Eagle Imports has been sneaking some incredibly high-value 1911s into the US market from Metro Arms.  Under their four brands of American Classic, Llama, Metro Arms, and SPS 1911 fans and newbies alike can find something built to the trim of their preference with a high chance of it costing much less than expected.  On the surface a purist might reject the idea of an imported 1911, but all of that changes once handling one of these guns.  The pride and craftsmanship that Metro Arms puts into building their 1911s is an inspiration, not a mimicry.

American Classic kept the common traits that have made Commander models popular.  Shortening the barrel to 4.25″ lightens the gun while not sacrificing too much of critical velocity needed for the .45 ACP to perform.  Reduced weight and length also makes carry a little easier though the full-length grip may be a challenge for some.  Debates about the Commander format have been around for ages and not germane to our review of this particular firearm so let’s get back to the gun.

Build quality matched what I have experienced from Metro Arms in the past, for those unfamiliar with them see the tabletop video below for an up-close view of construction quality:

Specifications below were taken directly from the product web page:

Other features that set this beyond your basic build include an extended slide release that reaches nicely in line with the extended safety, skeletal hammer, and a tuned trigger.  Increasing longevity and reliability are a throated forged-steel barrel and lowered and flared ejection port.  Eager to get the Commander to the range @BurgundyBomber and I hit the range for our standard battery of tests.  Tests included a basic function check of full magazine +1, feeding a few types of hollow points through it, and then grouping before giving our opinions.  The footage seen in the in the Shooting Impressions video below isn’t all of the shooting we did, but is the parts you might want to see:

As far as 1911s go the American Classic Commander is a winner in this gun-guy’s opinion.  Excellent aesthetics, features once reserved for custom guns, and flawless function.  Combine that with a very friendly MSRP starting at $624 and the Commander almost makes me a little upset.  Those of us who spent thousands of dollars on well-built 1911s in the past may feel swindled.

Eagle Imports and Metro Arms is providing equal or better pistols at a fraction of the cost.  For shooters new to 1911s a pistol like the Commander will spoil them and might just disrupt the market a bit as people learn to expect more gun for less money.  I don’t say this often, but I would highly encourage anyone on the fence about the American Classic Commander to find one and grab it before the pricing becomes more equitable to the quality.

About Graham Baates“Graham Baates” is a pen name used by a 15-year active Army veteran who spent most of his time in the tactical side of the Intelligence community including tours in Afghanistan and Iraq. Post-Army Graham spent some time in the local 3-Gun circuit before becoming a full-time NRA Certified defensive handgun instructor and now works as an industry writer while curating a YouTube channel on the side. Visit Graham on Youtube .