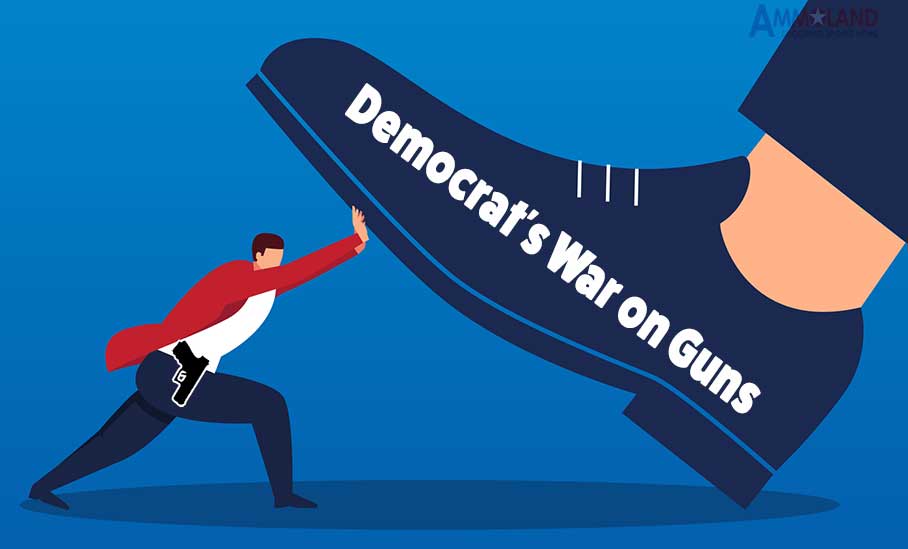 New York – -(AmmoLand.com)- Americans May Forestall All Attacks On Their Freedom But For One: Loss Of Their Right To Keep And Bear Arms.

There is ample evidence of sinister work afoot to tear down the fabric of this Nation that the founders of our Republic fought so hard to create and preserve. The creation of both the Federal Reserve System and the IRS that have sucked the lifeblood of Americans’ toil are two clear instances of attempts by rapacious forces from both within the U.S. and outside the U.S. to undermine the integrity of the U.S. as an independent and sovereign Nation State; to weaken our Nation’s institutions; and to enfeeble our Nation’s citizenry so that it might be more easily disciplined and controlled.

Understand there is nothing in the Constitution that either requires or mandates the creation of an independent privately owned Federal Reserve System or that requires or mandates the creation of a governmental structure, the IRS, within the U.S. They are both artificial constructs. The framers of our Constitution did not place them in that sacred Document. Yet, they exist, and both have done much to harm both this Nation and this Nation’s citizenry, up to the present moment in time. Just as insidiously, we have seen, for decades, attempts to destroy the independence and sovereignty of our Nation by thrusting the U.S. into economic unions with other Nations. These economic pacts and treaties serve as a diabolical backdoor through which the internationalist Rothschild clan and its minions dare insinuate themselves into the political, social, cultural, and legal fabric of our Nation, quite apart from the economic fabric, benefitting multinational cartels to the detriment of our Nation’s workers and small business owners.

But The Most Diabolical Assault On Our Nation And On A Free People Is This: Destruction Of The Right Of The People To Keep And Bear Arms.

More recently, within the last few years especially—and never far from the Collectivists’ desire to eradicate our free Republic—we see the destroyers of our Nation attempting, now and again, to undermine, indeed erase, the right of the people to keep and bear arms. With the U.S. Presidential election drawing ever nearer, we are seeing renewed attacks on the Second Amendment. In fits and starts, the Democratic Party—now a refuge for Radical Leftists of all stripes: Marxists, Socialists, Communists, and Anarchists—inevitably and invariably returns to its signature platform and policy goal: the weakening and eventual eradication of the Second Amendment. But why is that? Why would the Democratic Party Leadership and its Radical Left contingent want this? For this reason: An armed citizenry is absolutely anathema to their aim for a massive increase in the size of Government, and, concomitantly, for a powerful centralized Government exercising control over the Nation’s citizenry’s every thought and action. And so, understandably, albeit, unconscionably, we see the American citizenry’s exercise of its Second Amendment fundamental right of the people to keep and bear arms under insistent, incessant, omni-present, strenuous attack.

But, what is the rationale for the incessant, virulent attack on the Second Amendment? Is it really predicated on a desire, ever expressed, to curb “gun violence” as the Public is told? No! That is mere pretext. Were it otherwise, then those who truly claim a desire to curb violence with guns, would direct their attention to those elements in society—namely gang members, common criminals, and terrorists—who misuse firearms. But, they don’t direct their attention to these elements of society. Instead, they direct their attention to the firearm itself, and on the tens of millions of average Americans: rational, law-abiding citizens who wish only to exercise their fundamental right to keep and bear arms, uninhibited and unrestrained and unconstrained by Government.

Consider the media’s incendiary attacks on guns and gun ownership whenever a lunatic goes off half-cocked: most recently, as we see in newspaper accounts of two recent mass shooting incidents. The New York Times proclaims on a banner headline, on August 5, 2019, in its digital format paper that: “Shootings Renew Debate Over How to Combat Domestic Terrorism.” And in the Newspaper’s home edition, the banner headline reads: “One Shooting Massacre Follows Another, Shaking a Bewildered Nation to its Core.” In the fourth paragraph of the article, the Times reports, “Democrats urged Congress to take action and pass stricter gun laws.”

In other words, the Democratic Party Leadership and the Radical Left deem it perfectly acceptable to utilize the lowest common denominator in society to destroy the fundamental right of the people to keep and bear arms. But, even on that score, the antigun zealots in the Press cannot claim even a modicum of consistency. Where was The New York Times’ outrage when the lunatic and Antifa fanatic, Willem Van Spronsen, attacked an immigration detention facility in Tacoma, Washington, on July 13, 2019, with an aim toward murdering federal police officers and destroying the facility. That outrage was nowhere to be seen. The Times reported dryly, matter-of-factly, indeed deceptively, that:

“the man [Willem Van Spronsen], who was armed with a rifle, was throwing unspecified ‘incendiary devices’ at the Northwest Detention Center, according to a police statement. . . . Police have not established a motive for the attack, but The Seattle Times reported that a longtime friend of Mr. Van Spronsen’s, Deb Bartley, believed he had intended to provoke a fatal conflict.”

No motive for the attack on ICE Officials and on the Northwest Detention Center that can be deduced? Really? New York Times reporters couldn’t undertake an investigation? Conducting independent investigations–isn’t that what Newspaper Reporters do; what it is they are supposed to do, expected to do, to get to the bottom of a story? And, couldn’t the story’s news reporters hazard an educated guess, at the very least, as to a possible motive, given that Spronsen did, after all, leave a “manifesto” which he obviously intended for the public to read?

The conservative Washington Times, having investigated the would-be killer, Spronsen, unlike the Left-wing New York Times–that, it seems, decided to forego investigating the motives of Spronsen–found no difficulty at all in ascribing a motive to Willem Spronsen’s actions, as the Washington Times found reason aplenty for so informing the public of its findings, writing:

Willem Van Spronsen, 69, declares early on in his manifesto that ‘evil says concentration camps for folks deemed lesser are necessary. the handmaid of evil says the concentration camps should be more humane,’ using a term usually reserved for Nazi Germany’s death camps, but introduced in the border-security debate last month by Rep. Alexandria Ocasio-Cortez of New York.

He also mocked people criticizing Ms. Ocasio-Cortez for intellectual sloppiness, referring to ‘these days of highly profitable detention/concentration camps and a battle over the semantics.’

Van Spronsen, armed with an AR-15 assault weapon that his manifesto encouraged others to acquire to bring about a revolution, attacked the Northwest Detention Center in Tacoma around 4 a.m. Saturday. He threw ‘incendiary devices’ and set vehicles before officers shot him to death as he was trying to ignite a propane tank. In his manifesto, he called the detention facility ‘an abomination’ and that he was ‘not standing by’ as it operated.

‘i really shouldn’t have to say any more than this. i set aside my broken heart and i heal the only way i know how- by being useful. i efficiently compartmentalize my pain. . . and i joyfully go about this work,’ he wrote.

He indicated that he intended the attack as a suicide mission, writing that ‘i regret that i will miss the rest of the revolution. thank you for the honor of having me in your midst. giving me space to be useful.’

Antifa activists declared him useful, too.

Seattle Antifascist Action called him ‘our good friend and comrade Willem Van Spronsen’ and said he ‘became a martyr who gave his life to the struggle against fascism.’

The group went on to call for more such attacks in memory of Van Spronsen.

Apparently The New York Times missed these little details about Spronsen that the Washington Times felt pertinent enough to inform the public about. Or, perhaps New York Times Editors, unlike the Washington Times Editors, felt that Spronsen’s motives, clearly amounting to domestic terrorism were either inscrutable or irrelevant; therefore falling outside the parameters of what the Times concludes is “All the News That’s Fit to Print.” One is left to suspect that there is, in fact, contrary to adherence to its motto, much “News That IS Fit to print,” but that The New York Times would rather leave the public in the dark in those instances where the news doesn’t fit the paper’s personal ends: one directed to indoctrinating the public to accept a certain line of thought, rather than merely and essentially informing the public, so that the public might draw its own conclusion.

And there you have it!

About The Arbalest Quarrel:

Arbalest Group created `The Arbalest Quarrel’ website for a special purpose. That purpose is to educate the American public about recent Federal and State firearms control legislation. No other website, to our knowledge, provides as deep an analysis or as thorough an analysis. Arbalest Group offers this information free.

Firearm/Gun News, January 12-18, 2020
Additional Hearing Scheduled on Gun Ban Bills
Does Anyone Still Use 38 Super?
7 Meals You Can Make With Limited Ingredients
All New 2020 Conquer line from Riton Optics ~ VIDEO