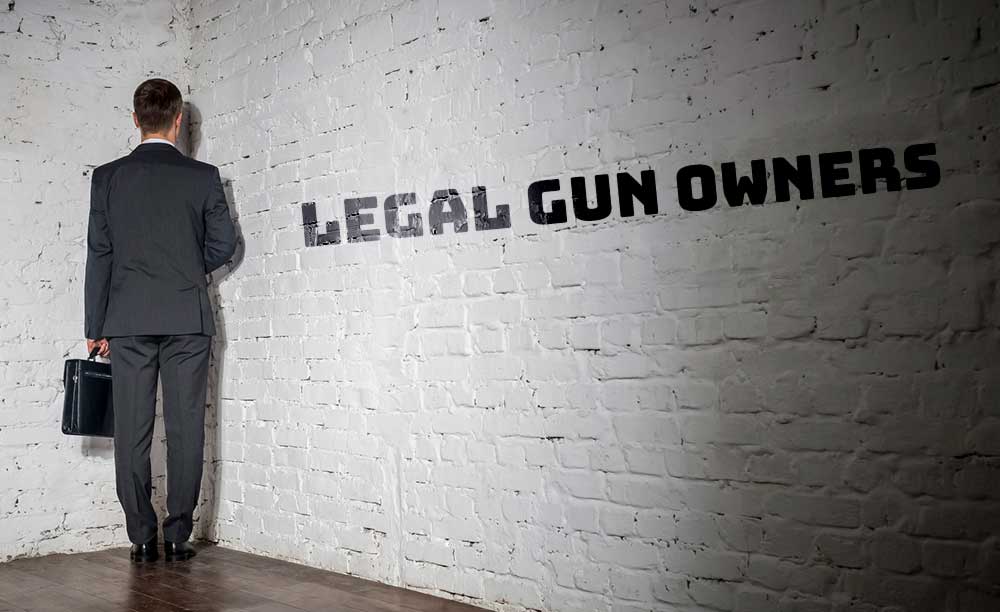 Texas – –(AmmoLand.com)- It is always perplexing that, when it comes to ideological agendas, the progressive socialist left will dictate what the law is. The US Supreme Court makes a decision that a woman has a right to murder an unborn child in her womb, and there is no concern for the inalienable right to life. The same court decides that same-sex marriage is the “law of the land.”

Funny, I thought the Supreme Court was to interpret our law, the Constitution, not make law.

So, here we are once again with folks making the push to do exactly what the Second Amendment of our individual Bill of Rights prohibits. “Shall not be infringed” does not seem to be clear enough for these folks.

Yes, these mass shootings are tragic, but why is it that the immediate response is a collective punishment of law-abiding, legal gun owners who have no culpability or complicity in what happened? When I was in the Army, I hated collective punishment, unless the unit was responsible for violating good order and discipline and the Uniform Code of Military Justice along with the guilty individual.

I despise it, as well, in this case.

First of all, let’s stop with the overused, emotional, inaccurate language of “assault weapons.” A person could use anything to assault another. What we are talking about are semi-automatic rifles, and trust me, you do not want to use a semi-automatic rifle in a firefight in combat! Now, I own several semi-automatic rifles. I have them because I enjoy long-range target shooting. It’s a skill and enhances discipline, plus, it is calming for me. Heck, no leftists cared when Rashida Tlaib claimed that the Holocaust gave her “a calming feeling?”

Now, my rifles, and the magazines, sit, idle, in my closet unless I take them out, transport them to the range, load them with ammunition, and pull the trigger sending a bullet downrange towards a target at 100-400 yards. So, why do I need to have my legally purchased weapons banned? Why should I be forced into a buyback program under the threat of confiscation? Will someone please doggone tell me why?

Do not give me that crap about I “do not need these weapons.” Who, then, makes these decisions as to what, I, a law-abiding citizen needs? Heck, do I also “need” an electric car, solar panels on my house, and my voice as a constitutional conservative silenced?

“A trio of Ohio Republicans have bucked their National Rifle Association backing to lobby for tighter gun control — including a ban on sales of assault rifles — in the wake of Sunday’s mass shooting in Dayton.

Rep. Mike Turner, whom the NRA endorsed with an “A” rating ahead of the 2018 midterm elections, said Tuesday that he now backs legislation that “prevents the sale of military-style weapons to civilians, a magazine limit, and red flag legislation.”

“I strongly support the Second Amendment, but we must prevent mentally unstable people from terrorizing our communities with military-style weapons,” said Turner in a statement. “The carnage these military-style weapons are able to produce when available to the wrong people is intolerable.”

Turner’s 180-degree turn on assault rifles came after he revealed that his daughter and a family friend were in downtown Dayton’s Oregon District early Sunday when Connor Betts, 24, opened fire with an AR-15-style rifle, killing nine people before he was gunned down by cops. “As a result of the police’s actions, my daughter and hundreds of others who were in the Oregon District last night are alive,” Turner said Sunday. “This is an unbelievable amount of evil that we cannot comprehend.”

Gov. Mike DeWine and Lt. Gov. Jon Husted, both of whom were endorsed alongside Turner by the NRA, have also come around on steps toward gun control.

DeWine — who was besieged by mourners’ calls of “Do something!” during a vigil in Dayton — also came out Tuesday in favor of background checks for most gun purchases in his state, as well as restricting firearms access to people perceived as unstable. “We know there’s going to be some violence; it’s the world we live in,” said DeWine. “But I can tell you this: If we do these things, it will matter. If we do these things, it will make us safer.”

Yes, do something. Do something, specifically, to tackle this issue of mentally unstable individuals getting access to weapons. Universal background checks, what the heck does that mean? I would refer these chuckleheads to BATF Form 4473 and understand that I, a retired US Army officer and former member of Congress, must fill this out and have a background check run on me each and every time I purchase a firearm.

I have persons gift me weapons. I have purchased weapons and gifted them to others, such as my oldest daughter, and my best friend’s wife . . . I was the best man at their wedding some 30 years ago. Now according to these people, and their proposed legislation, I become the law-breaker, the bad guy, instead of the criminal.

We should be focused on “straw buyers,” a law that is already on the books, and prosecute them.

Last I checked, criminals — and mentally ill criminals — are not concerned about reading laws or following posted signs during the commission of a crime.

With respect to “Red Flag Laws:” this is totally (un)constitutional folks.

It is a violation of the 2nd and 4th Amendment rights of citizens. Sure, it sounds like a great idea, now, just like the Patriot Act and FISA courts did, but this “law” in the hands of the wrong people will end up just like we have witnessed with the misuse of the FISA court system to punish political opposition.

In the future, who will define “disturbing behavior?” During the reign of Janet Napolitano at Homeland Security, there was a report that asserted former military were more prone to be white nationalists and potential domestic terrorists. The last thing we need are progressive socialists developing hidden lists of people — legal, law-abiding gun owners — and targeting them based upon unknown accusers. No one in America is supposed to be guilty before innocence unless you are not a progressive socialist.

I will not quietly await the day when it is not just getting “flagged” and censored by big tech leftist social media platforms. It will be the ensuing visit from the left’s “brown shirts” and Stasi police to confiscate my ability to defend myself from their tyranny because of my ideological beliefs.

Let’s not forget that the Parkland shooter, Nicolas Cruz had countless call-outs by law enforcement to his home; they did nothing. The schools knew of his disturbing behavior and expulsions, yet, they did not report it, and did nothing. If these incidents had been reported and put into the National Instant Background Checks System (NICS), how many would still be alive today?

The shooter in the First Baptist Church shooting in Sutherland Springs, Texas did not have his dishonorable discharge, and domestic abuse charge entered into the system by the US Air Force. Check out BATF Form 4473; those questions are there. He lied, and thus, no “red flag” in the system. But, that shooter was stopped by Stephen Willeford, a law-abiding, legal gun owner of a semi-automatic rifle, and NRA firearms instructor, who engaged him and ended that tragedy. Yes, an armed citizen protected his neighbors.

Hugo Chavez banned private gun ownership as he came into power in Venezuela under the pretense of curtailing gun violence. Now those unarmed subjects are being starved to death while socialist dictator Nicolas Maduro eats well and orders the military and his armed thugs, his version of Antifa, to gun down innocent citizens.

See, those people, as in all socialist dictatorships, lost their right to keep and bear arms, and therefore they lost all their other individual rights.

Yes, I care about ending these mass shootings which are being committed by delusional, deranged, and evil individuals. Anything can be used to “assault” another human, it is not the tool of evil being used, but it is the evil itself, and how it has metastasized, that should be our focus.

We have broken down and decimated the family. We have produced a culture of violence that promotes a disregard for life. And, we have told God that we do not want Him in our public spaces, especially our schools. Therefore, darkness, evil has infiltrated.

We need to ensure we have updated our NICS and end the stove-piping nature of law enforcement data. We need to stop with the attempt to mainstream the mentally ill and unstable. We need to track the disturbing behavior of adolescents, and not purge their records.

As I have always stated, an armed individual is a citizen; an unarmed one is a subject. If any government demands of me to lay down my weapons and surrender my Second Amendment right to keep and bear arms. my response will be simple: “Molon Labe.”

Allen West is a retired Lieutenant Colonel in the United States Army. Mr. West is a Senior Fellow at the Media Research Center to support its mission to expose and neutralize liberal media bias and is an author of the book from Brown Books Publishing Group, “Hold Texas, Hold the Nation: Victory or Death” available on Amazon. Read more from Allen West at www.theoldschoolpatriot.com .