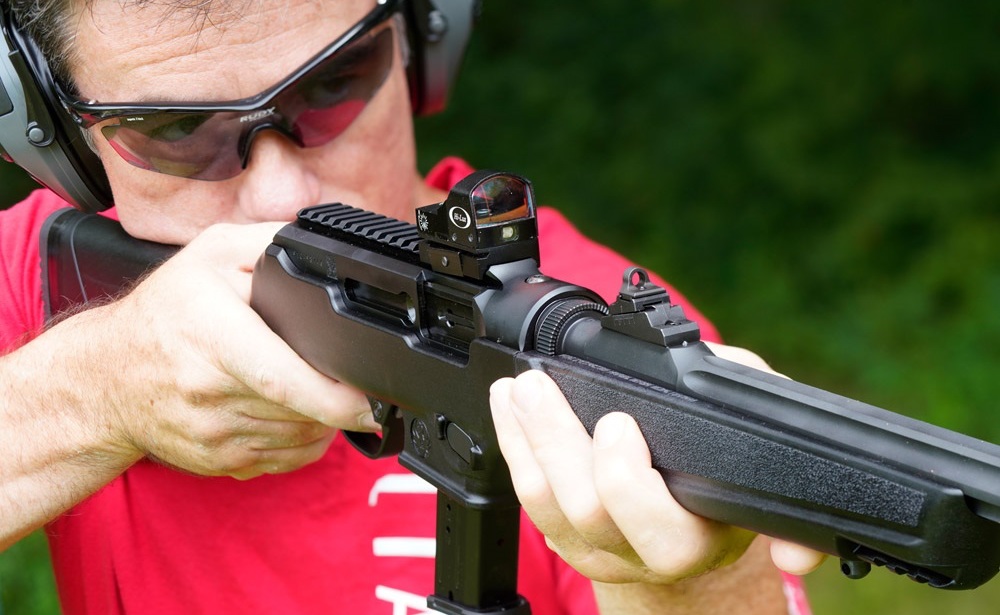 As they announced back in April, Ruger has released a line of six new PCC (Pistol Caliber Carbine) models. At first glance, the carbines differ mainly in aesthetic appearance. But there’s more when you dive deeper.

Let’s take a look at some of the specs, features and other design components that you might have overlooked for these pistol caliber carbine models.

Some of these PCCs don furniture of the more classic carbine. These have a fore-end of a more typical of a 16” barrel hunting rifle, while others have an MLOK “quad” rail more commonly seen on an MSR (Modern Sport Rifle /AR-15s).

They offer a takedown model in each configuration, for those wanting a very compact carbine choice. This is very popular for those looking to backpack carry something with more range and punch than their carry piece.

It is also useful for those who need to fly with their long gun, as it is discreet and there is no need for a long rifle case. (Those who compete in PCC 3 Gun will appreciate that aspect.)

This technique of backpack carry with the takedown models is further enhanced by the fact that the PCCs are all able to swap between three magazine choices.

The carbines also ship with a simple-to-swap magwell for Glock magazines. With minimal effort and five minutes, the firearms can be converted to run on standard Glock double-stack mags.

This opens up an entire range of compatible carry guns, as well as ubiquitous magazine options up to 33 rounds with factory choices and 50+ with magazine extensions.

While I wouldn’t say that exactly makes for a Grizzly country weapon, it does seriously open the defensive envelope.

The Classic and MLOK Variants

I have not played with all the options, but my experience with the Classic and the MLOK furniture variants left a few opinions.

The Classic is a light, handy weapon with a slight rear bias to the weight of the weapon. The ghost ring sight is very quick to acquire although by their very nature, trade speed for accuracy.

The short sight radius is a function of the takedown option and keeping both parts of the sight on the same component. Those two items are a comfortable trade-off for the engagement envelope and general mission of the weapon.

If a slower, more precise fire is desired, the rail allows for a multitude of optic options. Recoil is minimal and made even less with a small compensator attached to the end of the barrel.

This does increase the noise a bit, but again, I am happy with this trade-off. Follow-up shots are much quicker, as the light recoil of a 9mm from a 16” barrel gun is reduced even more.

The compensator also means a threaded barrel. This greatly simplifies suppressing the weapon. The Ruger carbines work well in this manner and exhibit minimal to zero gas in the face when running this way.

The MLOK variant is slightly less handy and has a noticeable front bias to its weight. This weight bias is caused by the rail being made of beefy stock.

The ghost ring set up works equal well as does the compensator. With the portly rail, I would be hesitant to add many accessories, as it would further unbalance the weapon. A tactical light would be about all I would feel comfortable with.

My only real concern for the carbines was something I thought would be a huge positive. My test model shipped with Tandem Kross accessories, like the trigger.

In theory, this very wide trigger should be great. The extra width creates an impression of a lighter than actual trigger pull. The knurling on the face of the trigger gives excellent feedback and confidence in grip and position.

The problem is, the knurling continues past the edges of the trigger. I wouldn’t quite call the effect knife-like, but it certainly is noticeable in casual handling and grinds off a layer of skin (or two) with sustained shooting.

A simple chamfer or radius at the edges would turn annoyance into a wonderful experience. Standard factory triggers do not have this issue.

That is my nitpick on an otherwise well-thought-out line of carbines that would be well-suited for rural varmint dispatching or running in the PCC class of 3 Gun.

What are your thoughts on Ruger’s new pistol caliber carbine models? Let us know in the comments below!