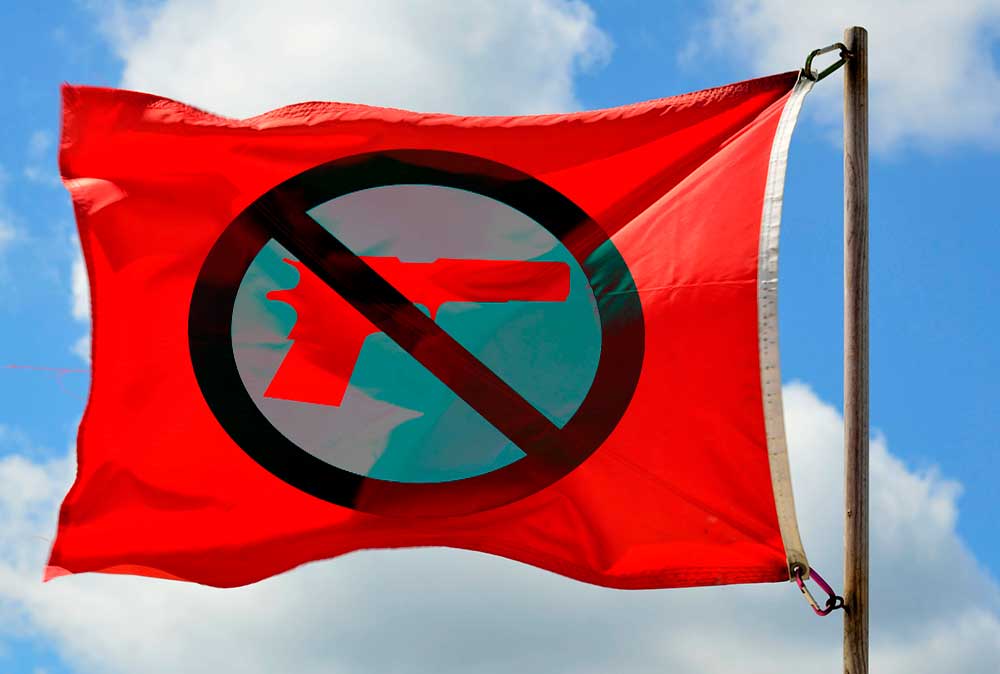 USA – -(AmmoLand.com)- In the politically-charged aftermath of the recent mass-murders, legislators at all levels have expressed interest in “red flag” bills in an apparent effort to “do something.”

Shockingly this group includes several lawmakers that previously appeared to understand that the Second Amendment protected every individual’s God-given inalienable right to self-defense against government infringement. Below is my effort to remind them that they are negotiating with forces that do not share the same values as our Founding Fathers and instead of negotiating in good faith for the common good they are using lies, tortured statistics, and strawman arguments to pave a road towards disarmament.

I am writing to you to request that you stop supporting “red flag” laws and additionally avoid any negotiation in an attempt to modify these bills to try to appease both those that understand the Second Amendment and those that would do away with it.

No one wants firearms in the hands of dangerous people. The radical anti-Second Amendment gun confiscationists (hereafter referred to as the “confiscationists”) such as Everytown for Gun Safety claim that if you oppose them, you must want guns in the hands of dangerous people. This absurd logic shamed the National Rifle Association to agree with the “concept” of “red flag” laws. Please do not be deceived as the NRA was.

The confiscationists have engaged in a campaign of deceit about the contents of these bills. In Virginia both Everyone and our Secretary of Homeland Security have asserted that these bills “get the guns” from people “exhibiting violent or unstable behavior.” These bills do not have any such language in them. Instead, these bills leave it entirely up to the court to decide whether what is presented meets the threshold for dangerousness.

The confiscationists gloss over how to identify dangerous people and how to respond to them in a manner that doesn’t do violence to our Constitutional principles of justice. None of the “red flag” laws in existence define what constitutes dangerousness – they merely list lines of evidence that shall or may be considered. Our President’s tweets about “red flagging” Mr. Cuomo and San Francisco’s resolution to label the NRA as a “domestic terror threat” demonstrate that emotion is likely to win these “hearings,” not facts or science.

Although touted as an effective means to save lives, the actual data regarding these laws tell a different story. To stop one suicide, twenty peoples’ firearms must be taken. In Virginia, to stop all firearm related suicides, 12,000 confiscation episodes would be needed per year. Red flag laws enacted in CT nearly twenty years ago haven’t been shown to stop a single homicide, and more than twenty people killed themselves after they were disarmed.

Some legislators have convinced themselves that if these “red flag” laws are modeled after restraining orders, then they too will pass Constitutional muster. This is preposterous because the rights infringed by protective orders do not compare with those protected by the Second Amendment and the Fourth Amendment that would be infringed by “red flag law” actions. Additionally, these bills are pre-emptive oriented versus the inherently reactive nature of protective orders. Even the American Bar Association conceded in its discussion of “red flag” laws that protective orders “prevent further acts of abuse.” “Red flag” laws are designed to stop initial criminal acts, not prevent further violent acts.

Our Founding Fathers designed a system of government consisting of a series of checks and balances in the service of defending liberty. They knew that tyranny was an omnipresent threat, and that tyranny begins with the disarmament of the people. Must we look to the Hong Kong protestors, who wave American Flags, sing our anthem, and wish they had our First and Second Amendment protections, to realize what we have to lose here? Or will we whittle away our rights until those protests happen here in America?

I demand action, and I want common-sense gun laws: laws that fulfill the intentions of our Founding Fathers, as protected by the Second Amendment, that live up to the modern-day standard that JFK called us to:

“…we need a nation of minutemen; citizens who are not only prepared to take up arms, but citizens who regard the preservation of freedom as a basic purpose of their daily life and who are willing to consciously work and sacrifice for that freedom. “

Finally, common-sense gun laws should respect those that want to practice often with their firearms without undue risk of hearing impairment by using suppressors.

Fulfill your oath to uphold our Constitution, and do not take up with those who would undo it.

Dr. Dennis Petrocelli has practiced forensic psychiatry for twenty years in Virginia. He is a contributing member of Doctors for Responsible Gun Ownership, a nationwide network of physicians, allied health professionals, scientists, and others who support the safe and lawful use of firearms. He recently appeared on the Gun for Hire Radio podcast to speak out against “red flag laws”: