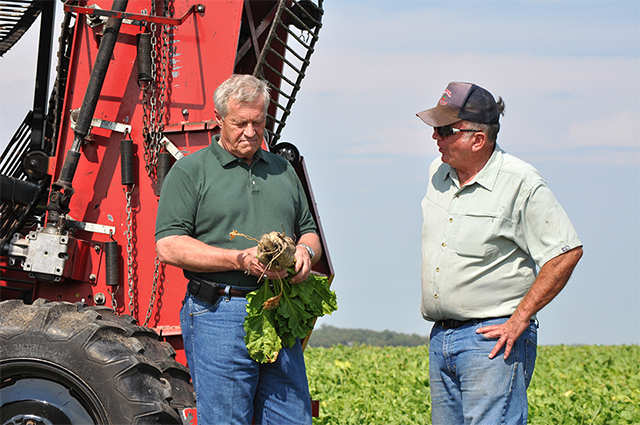 The Committee for Stronger Rural Communities (CSRC), a Super PAC founded to support Rep. Collin Peterson’s re-election bid, aims to raise $1,000,000 this cycle and is already half-way there.

Organized late last year by representatives of American Crystal Sugar Co., a farmer-owned cooperative based in Moorhead, the Super PAC aims to keep the Seventh District representative competitive in what could be one of the most expensive House races in 2020.

“The Committee fundraising target is $1 million for the cycle, dedicated to Rep. Peterson’s race,” said a representative for the Super PAC. “To date we’ve raised more than $500,000.”

Super PACs cannot coordinate directly with campaigns, meaning no conversations about messaging or events, but there is no limit on the amount of money they can spend on the race. As to why they’re supporting Peterson: “It is a large rural district. As far as emphasis on sugar, Collin Peterson has always been a supporter of sugar,” Kelly Erickson of Hallock, a board member for American Crystal Sugar and the Chair of the Super PAC, told AgWeek last year.

Minnesota is the largest producer of sugar beets in the U.S. And American Crystal Sugar is one of the most powerful organizations in Minnesota when it comes to campaign contributions. According to year-end campaign finance filings for 2019, CSRC received $150,000 from American Crystal Sugar Company and $25,000 from Minn-Dak Farmers Cooperative, both large sugar beet presences in the Seventh District. But it also received money from sugar companies around the country: $50,000 from United States Sugar Corp and $25,000 from Florida Crystals Corp, two large producers of sugarcane based in Florida; and $10,000 from Michigan Sugar Company Growers PAC. (Peterson is a strong supporter of the U.S. sugar program, a complex web of available loans, tariffs, export programs, and other trade measures that benefit U.S. grown and processed sugar.)

This month, he confirmed that he is running again.

“There aren’t many like me left in Congress,” he said in a statement announcing his re-election. “Rural Democrats are few and far between, and I’m concerned that rural America is getting left behind.”

In that same statement, Peterson quoted supporters of his run, including Curt Knutson, a sugar beet farmer and American Crystal Sugar board member.

“There’s no better news for farmers and agriculture than to hear that our Chairman Collin Peterson is running again,” said Knutson. “I’ve said many times that I hope he lives to be 100 years old and that I die with him as my Congressman.”

In 2014, conservative groups and Republicans spent over $3.5 million in an attempt to elect former state Sen. Torrey Westrom to Peterson’s seat. The race this year could very well be more expensive.

This cycle, Peterson has a few potential Republican opponents: former Lt. Governor Michelle Fischbach has raised the most money and is the clear favorite among Washington Republicans, while Dave Hughes, who was the endorsed Republican candidate last cycle, is running again. Others are running too: Jayesun Sherman of Windom, Army veteran Joel Novak of Alexandria, and Dr. Noel Collis, a gastroenterologist from Albany.

CSRC started running radio advertisements in October, emphasizing Peterson’s independence in Congress and their belief in his support for rural communities. The Super PAC’s website describes four other issue areas as reasons to support Peterson: his stances on the Second Amendment, health care, agriculture and veterans.

On the Second Amendment, they say that Peterson “has consistently defended Americans’ right to bear arms” and has an “A” rating from the National Rifle Association. On health care, they said that he looks for bipartisan solutions. And on agriculture and veterans issues, they emphasize his experience: Peterson is the Chair of the House Committee on Agriculture and he serves on the House Committee on Veterans’ Affairs and in the Congressional Rural Veterans Caucus.

Peterson is very much aware that the sugarbeet industry wants him to stay in the race.

“There’s work to do, and I can do the work. I think I know the job, I know how to do it. The sugar beet guys especially were freaked out that I wasn’t going to run — we just got them another $285M disaster deal that’s going to bail them out of what happened last fall,” Peterson told Prairie Public Broadcasting earlier this month.

“I just figured, what the heck? Two more years.”