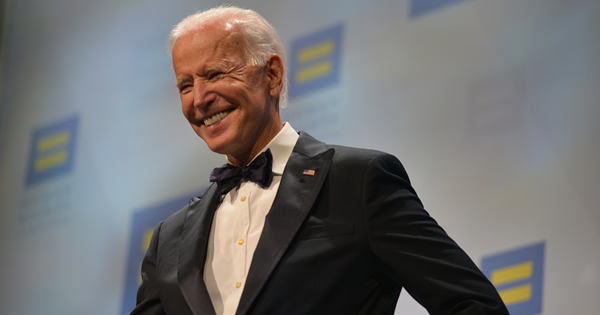 After Super Tuesday, the logical and wise choice for Democrats is to vote for former Vice President Joe Biden as our nominee. In the spirit of full disclosure in November 2018 I wrote we shouldn’t have anyone over 70 on the ticket. Yet we must respect that voters have spoken and the choices they have left us at this time are two white men nearing 80.

If one looks superficially at the two men left standing after a long primary battle both are infinitely better choices than the racist, sexist, homophobic pig now in the White House. Bernie Sanders is a firebrand who has stuck to a script for his 30 years in Congress but without any record of success. He recently suffered a heart attack on the campaign trail and now refuses to release his medical records. Then there is Joe Biden, with a nearly 50-year record of service in the Congress, an apparently healthy man with an overall record of moving the nation forward. There are some glaring flaws like his handling of the Clarence Thomas hearings and his vote on the Iraq war, and during the current campaign he obviously has had some trouble remembering specific facts and figures. No one is perfect.

However, looking a little closer at both candidates and their campaigns allows one to recognize without a doubt which is the far superior candidate to run against Donald Trump. That man is Joe Biden. This is a singular election and contrary to what people have said about previous ones for many this one may actually be the most important election of our lifetimes. We have a president who is creating chaos in the nation and the world. While people are digesting some of the outrageous things he is doing, he is riding roughshod over our Constitution and in the process destroying our democracy.

Sanders has been losing ground because he has hoisted himself on his own petard. Yet he tries to blame everyone else for not winning. In 2016, he blamed millionaires and billionaires, today it’s only billionaires as he himself is now a multi-millionaire. He literally shrieks at the establishment mistakenly linking African-American voters to the establishment. The same African-American voters who have been marginalized by the establishment for years. He calls women and the LGBTQ+ community the establishment simply because after long struggles they gained some measure of equality though are still not equal in many ways in the eyes of the law. In his effort to attract young voters he offers a multitude of freebies. Free healthcare, free college, forgiveness of student debt and legalized marijuana on day one of his presidency. He is lucky in their zest for these things many of those young people disregard facts. Sanders cannot deliver on those promises without Congress and an example of that is his Medicare-for-all bill that has languished for years without even Democratic support. His vision for the future is a nirvana that sounds wonderful but like Trump who promised to open factories, build a wall, and open coal mines among other things he never did, Sanders will not be able to act on his promises but will create chaos while fighting for them.

Biden on the other hand has a record of accomplishment in Congress. He passed the Violence against Women Act; fought the NRA to pass the Brady bill, which Sanders voted against five times, and managed to also fight the NRA and pass a ban on assault weapons. What Biden promises is a steady movement forward on healthcare with a public option, a fight for free community college, moving forward on climate change and a way forward on gun control with plans that could actually be passed.

Sanders calls himself a Democratic Socialist. What people hear is only the word socialist and they don’t like it even though most don’t really understand it. He didn’t help himself by saying how great he thought Castro was for Cuba. The word socialist will be like a stone around the neck of every down-ballot Democratic candidate from school board to United States Senate. He calls for raising taxes on everyone including the middle class to pay for his programs and yet has no real idea what they will cost. He scares people and they have had enough of being scared by Trump.

Biden does recognize we must ensure the economy will work for everyone which it doesn’t now. I want Biden to name a younger woman of color as his vice president and to commit to championing the next generation of diverse leaders. And I want him to say unequivocally that he understands the biggest existential threat to our world is the climate crisis.

What Biden understands that Bernie Sanders does not is that our Founding Fathers (yes there should have been founding mothers) with all their flaws set up our government in a way that calls for compromise to move forward. Biden also has the best chance of putting the genie of hate Trump released back in the bottle. He understands we must always call out white nationalists, neo-Nazis, racists, sexists and homophobes who with Trump in the White House were given permission to destabilize our country.

For all these reasons and more I have concluded Joe Biden is the candidate who is best able to move us forward in these difficult times, and to restore some sanity in our nation and in our dealings with the rest of the world. He is best able to head a ticket giving us the chance to keep the House of Representatives and a fighting chance to take back the Senate and rid us of ‘Moscow Mitch.’

I urge my fellow Democrats, independents and rational Republicans to join me in voting for Joe Biden.

Peter Rosenstein is a longtime LGBTQ rights and Democratic Party activist. He writes regularly for the Blade.