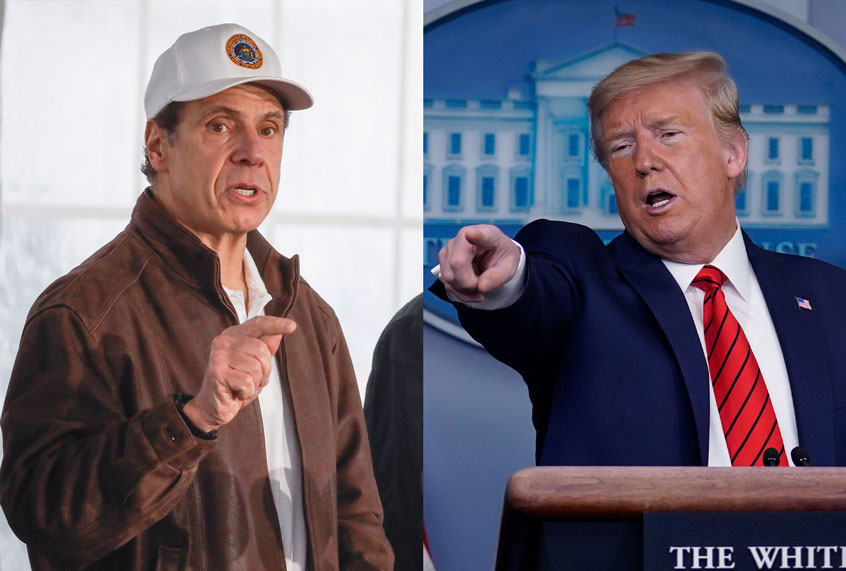 Imagine an unmarried couple that has lived together for years in an acrimonious relationship that sometimes distresses its two sets of offspring. Now imagine that this fractious household is suddenly required to “shelter in place” more intensively than before and that it must feign familial harmony in order to survive.

That’s how Donald Trump and New York Gov. Andrew Cuomo, both of them tough, street savvy, well-provisioned movers and shakers from New York City’s borough of Queens, are playing off each other like a talented, hardened con man (Trump) and a talented, hardened police detective (Cuomo). On Tuesday, they feigned familial partnership in converging but subliminally dueling press conferences, each using the other to navigate the coronavirus crisis after years of accusing one another of political opportunism and incompetence, including during this crisis itself. Two days later, their respective Thursday press conferences presented them as united against the common, invisible enemy.

As in other fractious partnerships, however, an external peril has illuminated disparities between these two partners’ respective powers and principles. At both of his press conferences, Cuomo gave long, rambling soliloquies about family that showed him clearly shaken by the challenges of restricting social interaction and of finding thousands of new hospital beds and ventilators. He may have been driven by conscience as well as political calculation to “shelter in place” with Trump, almost as decisively as fervent anti-Communists were driven to forge solidarity with “Uncle Joe” Stalin during World War II, when the Soviets mobilized resources and the Red Army to open a crushing Eastern front against the fascist plague.

Never mind that as recently as this month, Cuomo accused the Trump administration of “bad government and poor planning” that would “increase the fear” of the virus. Or that Cuomo won re-election as governor in 2018 while denouncing Trump, at one time asserting that leaders of the National Rifle Association “control the president … but they don’t control me.” Summoning his trademark “thug lite” manner in making that charge, Cuomo added, “You try to bully us in New York, we put our finger in your chest, and we push you back, and that’s what we’re going to do with the NRA.” And with Trump? There was no mistaking Cuomo’s meaning.

That was before Trump, whose bureaucratic sadism cost countless lives in Puerto Rico in the wake of Hurricane Maria and who has never made a secret of his contempt for Cuomo, tweeted early on Tuesday, “Andrew, keep politics out of it” [meaning the coronavirus crisis]. Trump had good reason to sound relatively temperate this time. To fight the virus effectively, he needs to be presidential, not vengeful. As badly as Cuomo needs federal help, Trump needs New York’s lockstep “cooperation” to minimize the real damage and its potential political cost only eight months before what he hopes will be his re-election.

After Trump’s Tuesday morning tweet, a phone conversation between the con man and the street detective ensued. Although no slouch at “thug lite” himself, Trump is also a master of subtler, more sinuous threats, and while we can only speculate about what was said on the phone, Cuomo told reporters a few hours later that the president “is ready, willing, and able to help. He is 100% sincere in saying that he wanted to work together in partnership…. His team has been on it…. So this hypersensitivity about politics and reading every comment and wanting to pit one against the other, there is no time for this. The president is doing the right thing…. And I appreciate it. New York will do the right thing in return.”

At his own press conference later that day, Trump said that “with respect to Governor Cuomo, we had a great talk this morning. We’re both doing a really good job and we’re coordinating it and we agree that different states need different things and we agree on that 100 percent…. I think we’re right down the same track and it’s going to be very successful…. New York has a pretty big problem, I guess it would be the No. 1 hotspot.”

Sure enough, resources that Cuomo had requested from the federal government began to flow. Still, listening to Trump praise Cuomo, I couldn’t help but think of the Teamsters Union banquet scene in Martin Scorsese’s “The Irishman,” where mob thugs within the union have found tactical reasons to present an award and fulsome praise to union officer Frank Sheeran (Robert De Niro), whom they’d really like to kill for failing to do their bidding.

Unfortunately, Trump’s presidency is neither a movie nor “The Apprentice.” And, right now, thousands of lives are at stake. Watching Queens politics playing out in this crisis, I can only hope that tough-guy Cuomo has given an encouraging new twist to the late Queens congresswoman and vice-presidential candidate Geraldine Ferraro’s campaign slogan in her 1978 bid for Congress: “Finally, a tough Democrat.” This rivalry isn’t over, any more than anti-Communists’ rivalry with Stalin was over when the two defeated Nazism in 1945.