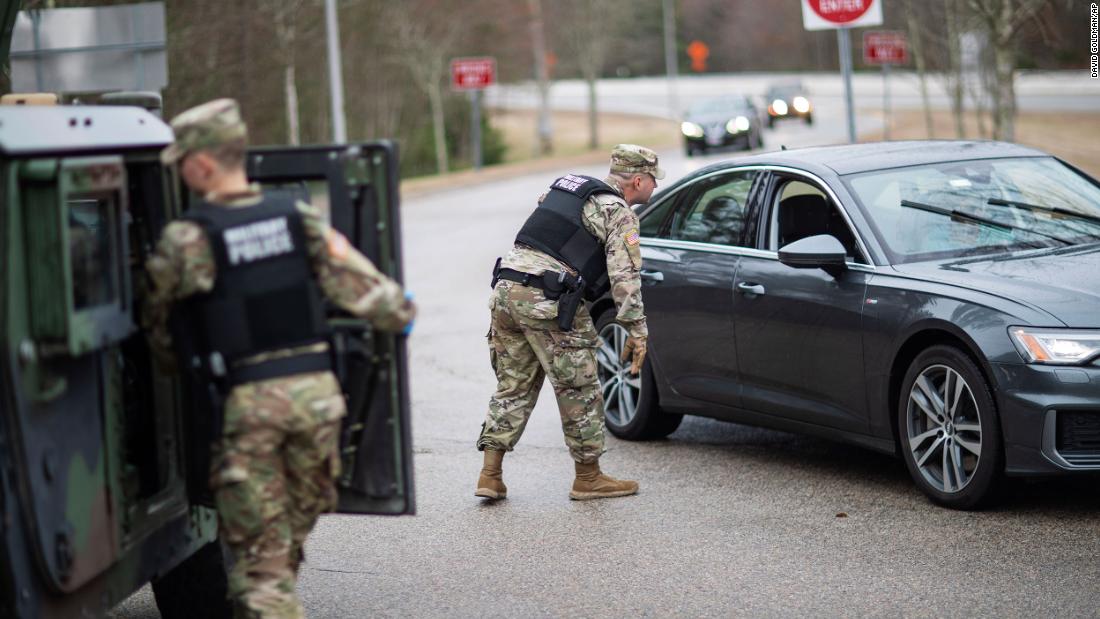 Civil libertarians say governments have the power to take extraordinary measures to stop the pandemic, but the power is not without limits.

Trump declared on Saturday he was considering quarantines over New York, New Jersey and Connecticut but pulled back after New York Gov. Andrew Cuomo and other officials questioned the lawfulness of such a move. Trump opted for a “travel advisory” instead, under which the Centers for Disease Control and Prevention have urged people from the three states to refrain from nonessential travel for 14 days.

“(W)e made it clear and he agreed, it would be much better to do what’s called a strong advisory. .. You don’t want to get to the point … that you’re enforcing things that would create a bigger difficulty, morale and otherwise, when you could probably accomplish the same goal.”

Civil libertarians say steps to prevent the spread of the deadly virus should be weighed in terms of whether effective — and lawful.

“People are afraid. Governments are not entirely sure what to do,” David Cole, national legal director of the American Civil Liberties Union, said Sunday. “The balance between civil liberties and safety changes in the context of a pandemic, but civil liberties and civil rights don’t get thrown out the window.”

Governments have struggled through the ages to deal with emergencies, whether they be an earthquake, hurricane or pestilence, said Ilya Shapiro, director of the Cato Institute’s Center for Constitutional Studies.

“You have to tailor your emergency measures to the nature of the emergency. In a hurricane, you evacuate the coasts. In a virus situation, there is no reason to evacuate the coasts,” said Shapiro, adding that his overriding concern is whether the “cures” become worse than the disease and whether some measures become long-term, such as any new government surveillance and tracking.

Legal experts say that broad measures that are reasonable and apply to everyone, for example “shelter in place” requirements, are generally lawful. But if government begins to target certain individuals or businesses, there should be ways to ensure a hearing and due process of law. Quarantines have been imposed over the centuries, but longstanding case law dictates that they not be unreasonable or arbitrary.

With the country just weeks into the current pandemic and a barrage of shutdown orders and travel restrictions, it is difficult to predict the depth of this new chapter of tensions regarding civil liberties.

Certainly, the country has faced natural disasters and a multitude of regional health emergencies in the past century. But none would compare to this national pandemic.

Its toll is fast-moving and so are the responses of government officials.

“Presuming that a random driver from Louisiana poses a greater risk of contagion than a random Texan is wholly arbitrary,” said Cole of the ACLU. “We are one country, and should be fighting this together.”

Abbott said he would be dispatching state troopers at and near entry points from Louisiana to enforce the order.

Meanwhile, lawsuits already have been filed over whether abortion clinics or gun stores, for example, can be regarded as nonessential services. And detainees in immigration and pretrial detention who might be especially vulnerable to contagion have been challenging their confinement.
Voters and their advocates in many states are trying to ensure that electoral systems are updated, for example, with greater mail-in options, to ensure ballots can be cast and counted in upcoming presidential primaries and the general election. And concerns are emerging about discrimination and rationing as hospitals become overwhelmed with the sick.

Deciding what’s essential during a situation

Since the early 1800s, federal and state courts have granted governments broad latitude to impose quarantines for public health. The Congressional Research Service has documented quarantine laws over the years, noting that states typically focused on specific disease outbreaks such as typhoid fever and tuberculosis. CRS noted that no large-scale US quarantine has been in place since the 1918 influenza pandemic.

In a March 17 report, updated after recent travel restrictions related to coronavirus were enacted, CRS asserted that “courts have recognized that expeditious actions by government officials are frequently required to protect public health or safety,” and it observed that judges are apt to let government act fast to head off health risks.

Beyond travel restrictions, government actions are beginning to be tested. Federal judges in recent days ordered the release of certain immigrants at high-risk of illness held in detention facilities.
Abortion-rights advocates have sued state officials that have tried to shut down clinics, as in Ohio and Texas, categorizing them as nonessential services in coronavirus orders. Gun rights activists have similarly challenged state laws that would close firearms stores. The National Rifle Association on Friday sued California over such a policy.

Shapiro of the Cato Institute, who is a longtime supporter of broad Second Amendment rights, said Sunday that “a right of self-defense is paramount in these times” and if states close gun stores, they could “inflame a panic.”

When Cuomo pushed back on Trump’s proposal for a three-state quarantine, the Democratic governor predicted it could cause “mayhem” and questioned how officials could even enforce such a lockdown.

Enforcement is an overriding dilemma for any restrictions as officials simultaneously try to ease jail and prison crowding.

Said the ACLU’s Cole: “The last thing anyone wants to do now is put more people in detention, where there is tremendous risk of coronavirus infection and spread.”