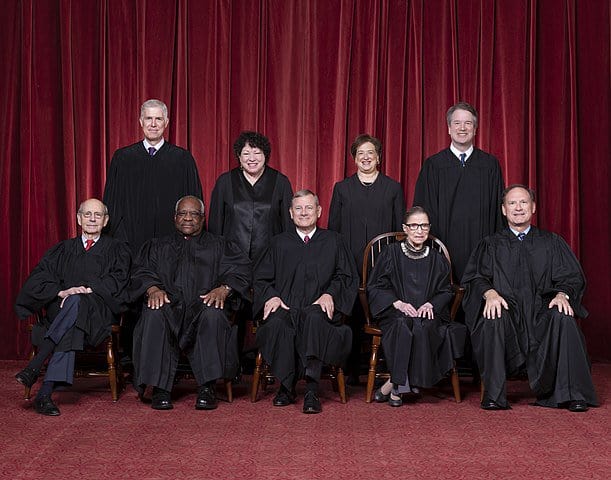 One year, three months and five days after the United States Supreme Court decided to hear a Second Amendment challenge to a New York City law that prohibited residents from taking their handguns outside of the city, even if the destination was a shooting range or a second home, the Court dismissed the case as moot in a 6-3 per curiam opinion.

Instead of deciding whether or not the New York City law violated the Second Amendment, the decision of the 2nd Circuit Court of Appeals, which had upheld the law, was vacated and the case sent back to the lower courts for further proceedings.

The case was dismissed as moot because the State of New York and the City of New York changed the law to allow one to travel directly from his home to a second home or shooting range outside of the city, which is what the plaintiffs had asked for in the lawsuit.

On the plus side, although Justice Kavanaugh agreed that the present case was now moot in the per curiam, he wrote a separate concurrence in which he agreed with the dissent written by Justice Alito. The dissent was joined by Justices Thomas and Gorsuch.

Justice Kavanaugh wrote in his concurrence, “And I share JUSTICE ALITO’s concern that some federal and state courts may not be properly applying Heller and McDonald. The Court should address that issue soon, perhaps in one of the several Second Amendment cases with petitions for certiorari now pending before the Court.”

On Friday, May 1st, the Supreme Court voted on whether or not to grant any of ten Second Amendment cert petitions that were on hold pending the now moot decision in NYSRPA v. NYC. None of the ten cert petitions was granted or denied. That means they will be relisted to a future conference. The next relist conference is scheduled to take place on May 15th.

Given that SCOTUS has now decided, in a 6-3 opinion, that a case can be dismissed as moot even after the court has granted the cert petition and heard oral argument in the case, those four justices are going to be reluctant to grant a cert petition that can easily become moot before the case is decided on its merits.

Five of the six of those ten cert petitions are “carry” cases out of Massachusetts, New Jersey, and Maryland. I say “carry” as they are all limited to handguns in states where a license permits one to carry a handgun both openly and concealed.

But given that the Illinois petition flat-out assumes that unrestricted concealed carry is a right protected by the Second Amendment, the originalist members of the court are going to be reluctant to grant that cert petition to be argued on the merits.

Aside from the Illinois concealed carry petition, all five of the “carry” cert petitions are here because the natural-born plaintiffs are from states where the issuance of permits to carry a handgun is discretionary by the issuing authority.

What may prove fatal to their petitions being granted is that none challenge the laws that require people to have a permit to carry a handgun in public. Moreover, the states could still change the law to remove the “good and substantial reason” or “good cause” requirements to obtain a permit but still leave the issuance of the permit to the discretion of the issuing authority.

Now that SCOTUS has set such a high bar to mootness, that is likely all that would be required to moot those cases. These cert petitions would be dismissed as moot with the cases remanded back to the lower courts for them to start over from the beginning.

This brings us to Young v. Hawaii which is in the 9th circuit court of appeals and is scheduled for en banc oral arguments during the week of September 21st. If Mr. Young loses and his cert petition is granted by the Supreme Court, all that Hawaii needs to do is to grant him a permit and his case becomes moot.

Of course, Hawaii could grant his permit today and his en banc appeal becomes moot because there is no other relief the court could grant him based on the Complaint he filed in the district court. Mr. Young did not challenge the permit requirement.

For those cases which seek permits but do not challenge the permit requirement, and have an association (such as the National Rifle Association) as a named plaintiff, if the defendants in those cases were to grant the natural-born plaintiffs permits then that would just leave the associational plaintiffs. These are plaintiffs that can’t be issued permits. Even if they had named a member of their association who was not also a named plaintiff in their lawsuits, it is highly doubtful that these associations would even have standing to continue in their lawsuits.

What Mr. Young and I have in common is that the defendants in both of our lawsuits are leftwing extremists, and so for as long as we are breathing, our cases will not become moot. But if Hawaii were to blink and issue Mr. Young his permit, my California Open Carry lawsuit will still remain standing because I wrote a Complaint that can’t become moot because of any change in California state law.

Although SCOTUS does not have to grant or deny any of the pending petitions this term, it is likely that they will be granted or denied by the end of this term currently scheduled for June 29th.

The en banc oral argument for Young v. Hawaii is scheduled for the week of September 21st.

Although my California Open Carry lawsuit is not stayed, and although it has been argued before a three-judge panel, submission of my appeal for a decision has been vacated by my three-judge panel until there is a final decision by the eleven-judge en banc panel assigned to Mr. Young’s appeal.