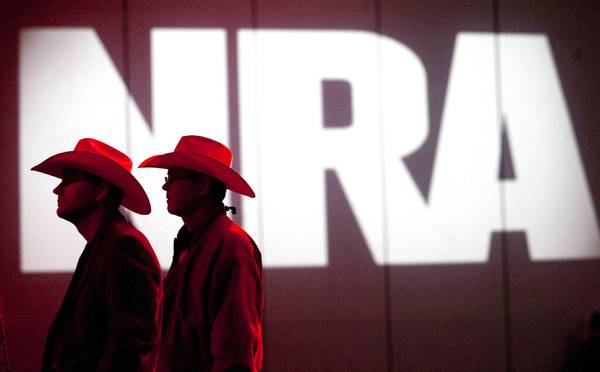 In this May 4, 2013, file photo, National Rifle Association members listen to speakers during the NRA’s annual Meetings and Exhibits at the George R. Brown Convention Center in Houston. The NRA has been cutting staff and salaries amid the coronavirus pandemic.

Leave it to the National Rifle Association to exploit the COVID-19 pandemic for its own gain.

But that’s what the NRA has been doing in recent months — fearmongering over the crisis to drive up gun sales and try to broaden its membership base.

On social media and internet videos, the NRA paints a dystopian picture in which social order has spun apart and guns are the only means of assuring survival. Think “Mad Max” except with people fighting over food instead of fossil fuels.

The organization also is propagating the usual tinfoil-hat claims about government takeovers, suspension of Second Amendment rights and so on.

“You might be stockpiling up on food right now to get through this current crisis. But if you aren’t preparing to defend your property when everything goes wrong, you’re really just stockpiling for somebody else.”

This paranoiac narrative is completely out of step with reality. In cities around the globe, authorities say crime has subsided during the pandemic.

Alarmingly, though, the Federal Bureau of Investigation reported that it set a record in March in processing background checks for gun purchases through its National Instant Criminal Background Check System (NICS).

It’s a strong indicator that the crisis sparked a surge in gun sales, although the actual number of sales is impossible to determine because there’s no national gun registry.

Skyrocketing sales could hardly come at a worse time.

Law enforcement officials and victim advocates went into the pandemic deeply concerned that domestic crime would rise as families isolated amid the tension and uncertainty. And while the numbers have not conclusively proven an increase, it’s widely believed that incidents are up but that much of what’s happening behind closed doors is simply not being reported.

For more guns to become part of such a volatile mix is deeply worrisome.

The same goes for suicides. At a time when people are dealing with intense emotional issues related to job losses, loneliness, etc., it’s terrible that more guns are flooding the market.

In addition to its dangerous messaging, the NRA also has aggressively fought governors who shut down gun stores after labeling them as nonessential.

Yet the organization, true to its dark nature, denies it’s trying to fuel gun sales. Rather, it says, it’s protecting its 5 million members’ rights and makes no money off of gun sales.

What a disingenuous statement. The NRA may not get revenue directly from gun sales, but it does get membership dues from gun owners — and more gun owners mean the potential for more members.

And make no mistake, the NRA and the extremists among its members aren’t about protection. The militia members and other armed individuals who’ve been showing up for “open up” rallies at statehouses nationwide say they’re defending individual rights and the Second Amendment, but they weren’t guarding anything when they showed up armed in the Michigan governor’s office, got in the faces of law enforcement officers and screamed at them. They were threatening a sitting governor and the authorities, and using their weapons as intimidation.

Those radicals say they don’t want to “live in fear,” but the list of what they’re scared of is a long one — the government, people of other races, strangers, etc. The NRA thrives on that fear. If there’s any good news here, though, it’s that the organization’s efforts aren’t working. It recently laid off dozens of employees and canceled a number of events, including its national convention, due to financial issues. Salaries were cut across the board. In what should have been a lucrative time — the NRA loves election years because it can fan flames of fear that Democrats would take away Americans’ guns — the organization is staggering.

The future doesn’t look good, either. The NRA is on the wrong side of a lot of equations. Its militant messaging and extremist political stance have increasingly put off American gun owners, who are overwhelmingly responsible people who see the need for reasonable gun safety measures.

Meanwhile, the NRA is generally seen as an evil empire by today’s young Americans, who have grown up facing the aftermath of runaway efforts to do away with all gun regulations. After seeing their peers be slaughtered, dealing with the trauma of mass-shooter drills and so forth, they justifiably want to hound the NRA out of existence.

No doubt, this is an organization that is on the wrong side of history. Its exploitation of the current pandemic is another example of why.