Editor’s Update 9:45 AM, Everett Police released the following information on this morning’s shooting:

Police and medics on scene of the shooting.

At about 4:50 a.m. this morning, officers were dispatched to the 1600 block of 126th St SE when a homeowner reported shooting someone inside his residence.

Detectives with the Major Crimes Unit continue their investigation but found evidence the deceased male broke into the residence and entered a room containing firearms. The homeowner woke to sounds in his house, confronted the male burglar and shot him. The context of the confrontation is under investigation.

The Snohomish County Medical Examiner’s Office will respond to the scene to take custody of the deceased male to determine his identity as well as cause and manner of death.

A small section of 126th St SE will remain closed for the investigation and traffic has been diverted. 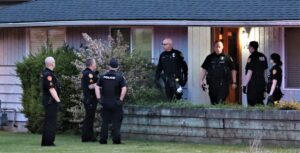 Officers outside the home while medics are inside.

Medics with Everett Fire on scene

Shortly before 5 AM a homeowner in the Silver Lake neighborhood off 126th street SE called 911 to report he had shot an intruder inside his home.

Police and medics arrived on the scene and found a person with a gunshot wound.

EPD Major Crimes detectives have been called to the scene but no further information is being released at this point.

My Everett News is a hyperlocal news website featuring breaking news and events in Everett, WA. We also cover City of Everett information and items of interest to those who live and work in Everett. It’s written by Leland Dart a former Snohomish County based radio reporter born and raised in Everett.

View all posts by myeverettnews →