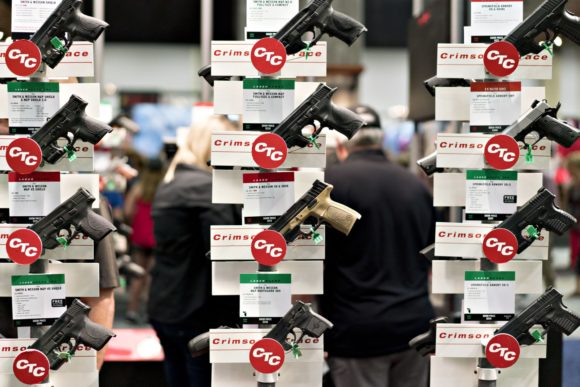 Firearms manufacturer Smith & Wesson Brands Inc. negligently marketed the AR-15 style semiautomatic rifle that was used in a 2019 mass shooting at a California synagogue, victims and survivors claim in a lawsuit.

The company illegally designed and marketed its M&P 15 Sport II rifle to appeal to a “dangerous class of would-be mass shooters,” including by falsely associating the product with the U.S. military and law enforcement, according to a complaint filed last Monday in California state court in San Diego.

The suit mirrors one filed against Remington Arms Co. by family members of nine children and educators killed in the 2012 Sandy Hook Elementary School massacre. In that case, Remington argued the suit was blocked by a 2005 federal law enacted to shield the industry from lawsuits, but Connecticut’s top court last year let the case proceed. The U.S. Supreme Court declined to hear Remington’s appeal.

In the San Diego lawsuit, the gun-control group Brady Center claims the military-style weapon was used to kill one worshiper and wound three others in the April 2019 attack on Chabad of Poway Synagogue in Poway, California. A mass assault with such a gun was foreseeable by the company, the group said.

Smith & Wesson “deceptively marketed its military-style assault rifle in a way that attracted impulsive young men with military complexes who were particularly likely to be attracted to the unique ability of AR-15 style weapons,” according to the complaint.

The most important insurance news,in your inbox every business day.

Get the insurance industry’s trusted newsletter

ILA | Ohio: Emergency Powers Bill Advances to House Floor
Opinion | We can’t cure mental illness, but we can get guns off the streets
Senator Chris Murphy: ‘victory after victory’ is coming for US gun control | US gun control
Why Biden’s repeated call for an assault weapons ban could be a political winner
SHEILA NAZARIAN: It’s Time For Jews To Take Advantage Of The Second Amendment