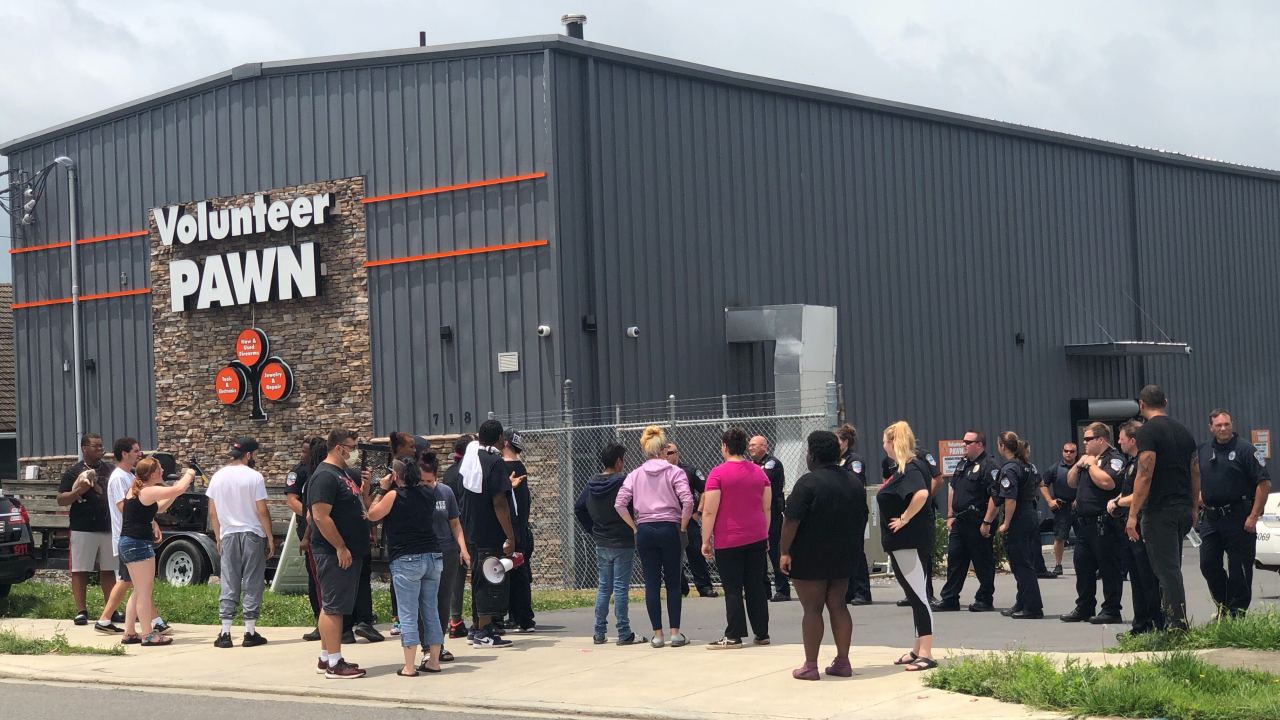 JOHNSON CITY, Tenn. (WJHL) – After an altercation at a Johnson City pawnshop, questions of discrimination during the sale of a firearm have come up.

Protesters gathered outside the Volunteer Pawn Shop Monday afternoon after several members of a group identified as the “New Panthers” were asked to leave. The group members said they were planning to purchase firearms after their community outreach event Monday morning, but were refused service.

Founding New Panthers member Arron Rashad Valentine told News Channel 11 that all 15 members who went to Volunteer Pawn on Monday were wearing black New Panthers T-shirts because they had just completed a community outreach prior to the shopping trip. He added that though most of the members were people of color, some group members were white.

Stewart Harris, a law professor from Lincoln Memorial University told News Channel 11’s Bianca Marais that a refusal of sale like the one that allegedly happened Monday is not unconstitutional, but could pose some civil rights issues.

“Now, first of all, there’s no constitutional issue here, because the government is not involved, but there are civil rights statutes at both the federal and the state level that prevent people like the gentleman at the pawnshop, who operates something called a public accommodation. You know, it’s a place where the public is invited in to purchase something, in this case, goods. That proprietor is prohibited from discriminating on the basis of either race or creed,” Harris explained. “Now, race may have been involved here…and of course, they were associated with the Black Lives Matter movement, that might implicate the idea of creed, because creed, of course, is simply a set of beliefs – whether religious or not – and so, if in fact, the store owner refused the sale of a good in commerce to people on either the basis of their race or their beliefs, he could be in a bit of difficulty with either the federal or the state civil rights statutes or both.”

Valentine told News Channel 11 that he felt discriminated against.

Harris added that if Valentine is correct, and the group had been asked to leave the shop due to discrimination, then there are statutes that protect the potential purchasers.

“There’s both the Tennessee Civil Rights statute, and the Federal Civil Rights statute, that bars discrimination in stores that are open to the public on the basis of several things, those are included as race and creed. Now, if I understand you correctly, this gentleman refused to sell to these Black men, perhaps on the basis of race, I don’t know and I’m not making any accusations, but perhaps also because they were supporting a particular political movement, and supporting a political movement is arguably a creed, it’s your set of beliefs,” Harris said. “And so, this gentleman may find himself in a bit of hot water if the people who were refused service decide to file complaints in this case.”

Dave Peurifoy, a firearms dealer in Greene County told News Channel 11’s Bianca Marais that, in the state of Tennessee, there are several reasons someone might be refused or denied the sale of a firearm.

“Some of the criteria might be that they’re not the actual buyer of the firearm, such as with a straw purchase. Other criteria might be they’re under indictment for a felony or they’ve been convicted of a felony, being a fugitive from justice, unlawful user of marijuana or a depressant, other stimulants or narcotic drugs. They’ve been adjudicated as mentally defective or they’ve been discharged from the armed forces under dishonorable conditions or they’re under a restraining order or they’ve been convicted in a court of a misdemeanor crime of domestic violence. Or if the firearms dealer just has statements from the person or observations from the person that might be indicative that the firearm might be used for unlawful purposes,” he said.

The Supreme Court in January of 2014 ruled that “straw purchasing” is illegal in the United States, meaning having someone else purchase a firearm for you.

The U.S. Department of Justice’s Bureau of Alcohol, Tobacco, Firearms and Explosives regulate, among other things, the sale of firearms.

The ATF lists several criteria that would allow a firearms dealer to deny a sale, including all that Peurifoy mentioned.

“The civil rights statues apply to any goods that are being offered to the public in a store such as this. While the fact that it’s a gun, I don’t know that it really makes that much difference,” Harris explained. “All that happened was that you had several Black people come in sporting B.L.M. logos or messages and the proprietor, as I understand it, simply said ‘I’m not going to sell to you because I don’t want to, I’m not comfortable selling to people who support Black Lives Matter,’ or perhaps, and again, I’m not making any accusations, he was also influenced by the race of the people there, and either one of those, if true, could put the proprietor on the wrong end of the civil rights complaint.”

If, in fact, there is proof of discrimination, the New Panthers can move forward with legal recourse, Harris said.

“I don’t know of any allegations on the part of the customers, so I don’t think that the store owner based on what I know has any particular complaint, besides if they were berating or coming in and being violent or something,” he explained. “But as far as the potential purchasers who were refused service are concerned, they can go online and they can file a complaint with the Tennessee Human Rights Commission or… there are federal civil rights commissions too, I mean, there are places to file these complaints and then there’s a fairly lengthy administrative procedure, a fact finding procedure, and then at the end of that process, which takes several months to complete, then they possibly will be able to take and file a lawsuit in either a state or federal court, and so yeah, there are procedures here and they are somewhat lengthy but they are designed to be pursued by people with or without attorneys and so, yes, there is redress here, there is recourse that the gentleman who is refused service, can take.”