A Fordham University student filed a lawsuit against the school after he was banned from campus over social media posts showing hiim holding an AR-15, and another about slain retired officer David Dorn.

A letter written to Tong by the Office of the Dean of Students determined that his posts were a ‘Violation of University Regulations relating to Bias and Hate Crimes’ and classified as ‘Threats/Intimidation.’

On June 3, Tong shared a photo of David Dorn, a 77-year-old retired captain of the St. Louis Police Department, who was shot dead by a looter while reportedly trying to protect his friend’s pawn shop during a riot.

Austin Tong, a 21-year-old rising senior at Fordham University, has filed a lawsuit against the school after he was penalized over two social media posts

Dorn’s body was found dead on a the sidewalk in front of Lee’s Pawn & Jewelry after his death was streamed on Facebook Live in June.

‘Y’all a bunch of hypocrites,’ wrote Tong, a Black Lives Matter supporter, venting his apparent frustrations over the lack of outrage over the killing.

On June 4, Tong shared a photo of himself holding a rifle outside a home in Nassau County with the caption ‘Don’t tread on me. #198964 USCN.’

The second post was meant to honor the 31st anniversary of the Tienanmen Square massacre, which saw student-led pro-democracy demonstrators brutally killed by government troops in retaliation. 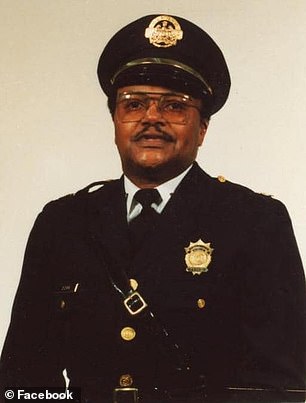 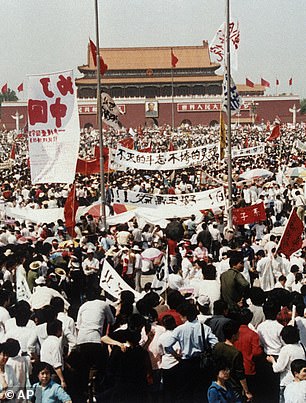 He wrote in a letter that the social media posts were made out of ‘love for this country.’

‘The content of both posts are fully by my love for this country, fully within the boundaries of law and university code, and in no way expressing threatening or hateful thoughts — yet the University subjectively and maliciously assumed my intentions as hate crime and threat,’ he said.

Court documents obtained by New York Post reports that the posts prompted a hearing and inquiry by Assistant Vice Principle and Dean of Students Keith Eldredge after ‘members of the Fordham community felt threatened by the social media posts.’

Tong maintained that he wasn’t threatening people, but instead making personal political statements.

School officials launched an investigation into Tong that resulted in a June 10 hearing where he defended his posts. 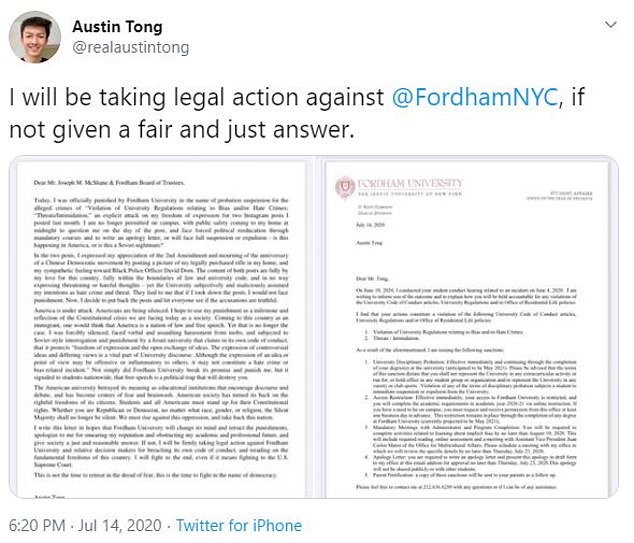 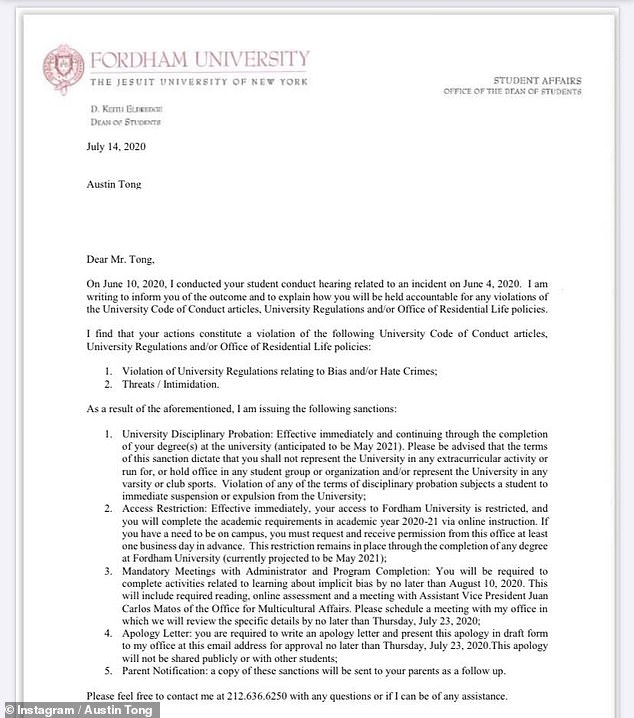 Pictured: a letter from Fordham University addressed to Tong about the social media posts 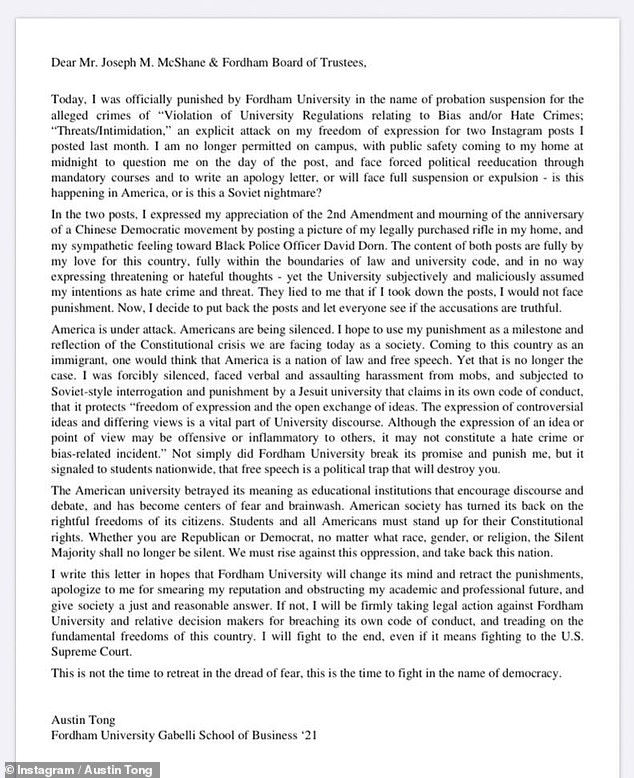 Pictured: Tong’s response to Fordham University after he said he would file a lawsuit over the penalities

Tong reportedly said he was ‘sympathetic to the movement for racial equality’ and his post about Dorn was ‘to speak out against tyranny and oppression, while noting that the phrase has been used by various branches of the United States military.’

During the hearing, Tong added that he supported the Second Amendment right to bear arms and the photo was to illustrate that ‘had students in China been afforded this right, there would have been fewer casualties at the hands of the Chinese State.’

It would take over a month for school officials to determine Tong’s posts violated school protocol and placed a series of penalties on him.

Tong was put on disciplinary probation that banned him from participating in school office, student groups, sports and extracurriculars in the upcoming school year.

If he violates his probation, Tong could face suspension or even expulsion from the university.

Tong will also be forced to complete his senior year online and can only be on campus after getting permission. He must undergo bias training and had to write a letter of apology by Thursday. 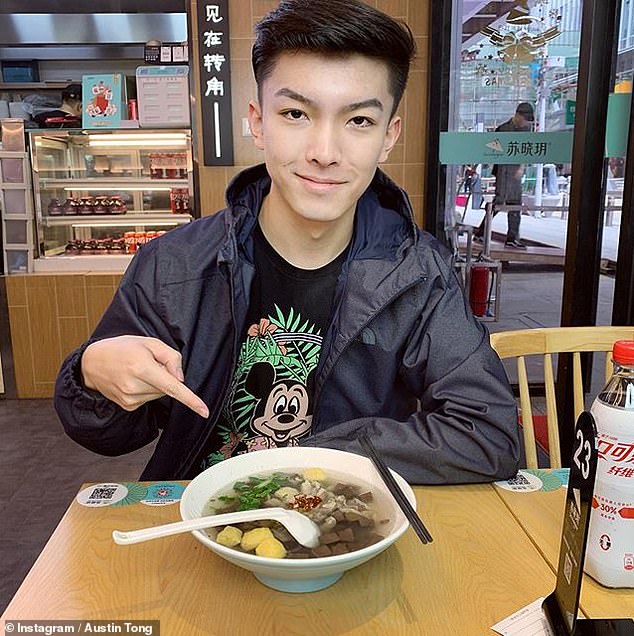 But Tong said the ‘draconian’ punishments ostracized him among his peers and he’s now ‘treated like a criminal.

Tong refused bias training and said he won’t write a letter of apology because ‘he plainly did not violate any Fordham policies … and should not have to submit to punishment for exercising his constitutional rights,’ court documents read.

‘Intellectual tyranny within the ranks of higher education–all for a mere $50,000 in annual tuition–must end right now.’

Tong, a Chinese immigrant, said he previously believed America was characterized by law and free speech, but that is ‘no longer the case.’

‘I was forcibly silenced, faced verbal and assaulting harassment from mobs, and subjected to Soviet-style interrogation and punishment by a Jesuit university that claims in its own code of conduct, that it protects “freedom of expression and the open exchange of idea,”‘ he wrote in the letter.

Tong doubled down on his push against Fordham University in an interview with Fox News host Laura Ingrham.

‘I think they have an issue with anything they disagree with and they want to silence any voice they don’t like and that’s really what happened and they silenced me because they don’t like what I said,’ said Tong. 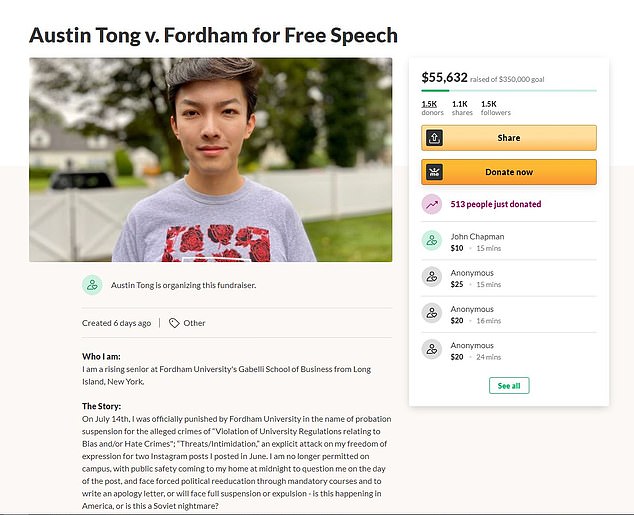 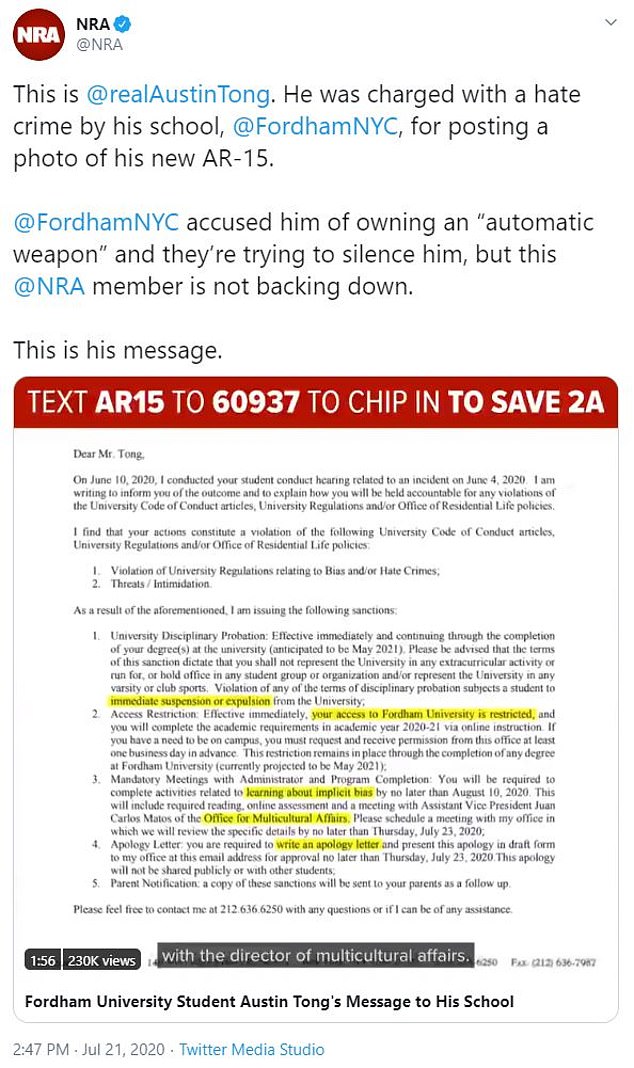 He added that he’s ‘not going to say sorry’ and ‘won’t back down’ from fighting Fordham University.

‘This is not just my case. They took my life away. They put my future into a very bad place and that’s why I’m going to bet all my future into this.’ he said.

Tong created a GoFundMe last week to raise money for litigation costs and , as of Thursday night, had raised more than $55,600.

He was also featured in a video by the National Rifle Association shooting a rifle and speaking about the incident.

‘Fordham University accused him of owning an “automatic weapon” and they’re trying to silence him, but this NRA member is not backing down,’ the post read.

DailyMail.com has reached out to Tong for further comment.

ILA | Hawaii: Honolulu Seeks to Severely Restrict Carry
Letter to the editor: Step up with a solution on guns | Letters to the Editor
Matt Gaetz Slammed for Constitutional Carry Tweet: ‘People Will Die’
The question is not, ‘What is it about Colorado?’ | John Moore | Arts & Entertainment
Colorado shooting hero did more than officers in Uvalde