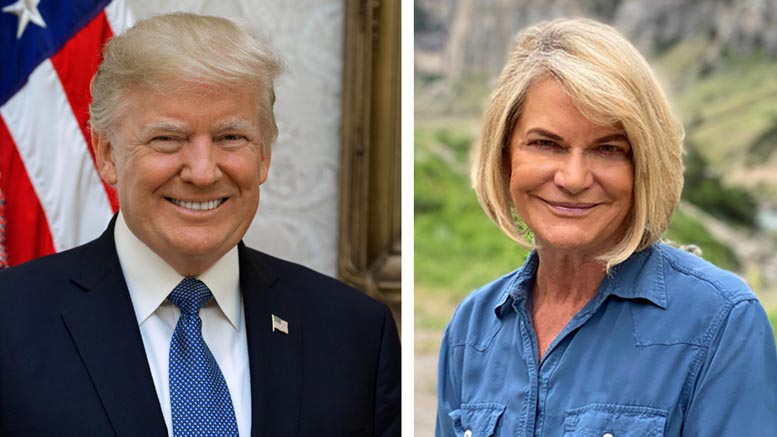 “Cynthia Lummis is a friend of mine and a great woman. She is running for Senate in the very Special State of Wyoming. Cynthia is Strongly for our Military, our Vets, and protection of the Second Amendment…” President Trump tweeted. “She will be a great Senator, and has my Complete and Total Endorsement!”

“I am honored to have the endorsement of President Trump,” said Lummis.

“Right now, it is more important than ever that we follow President Trump’s lead and put America First! In the U.S. Senate, I’ll stand shoulder-to-shoulder with President Trump to bring manufacturing jobs back to the United States from overseas and get our economy back on track. With support from the people of Wyoming, I look forward to working with President Trump to launch the Great American Comeback.”

Lummis, who served for eight years as Wyoming’s sole representative in Congress from 2008-2016, is running to fill the seat being left vacant by Senator Mike Enzi.

Prior to serving in the U.S. House of Representatives, Lummis spent eight years as Wyoming State Treasurer and 14 years as a member of the Wyoming State House and Senate.

Wyoming’s primary election will be held this Tuesday, August 18.

Full transcript of “Face the Nation” on Nov. 27, 2022
ILA | CA DOJ Gun Owner Data Leak Due to “Deficiencies in Policies, Procedures, and Inadequate Oversight” Study Finds
Gun control debate renewed after two mass shootings in Virginia
Biden Protected by Very Guns He Says Have ‘No Redeeming Value’
Beto, Trump not out for the count