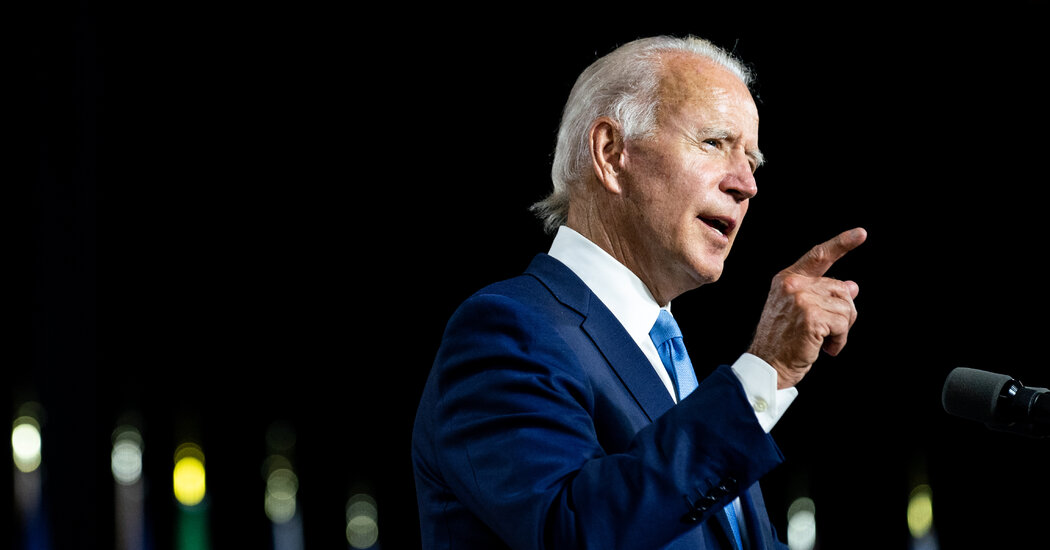 Democrats formally nominated Joseph R. Biden Jr. for the presidency on Tuesday night, anointing him as their standard-bearer against President Trump with an extraordinary virtual roll call vote that showcased the cultural diversity of their coalition and exposed a generational gulf that is increasingly defining the party.

Denied the chance to assemble in Milwaukee because of the coronavirus pandemic, Democratic activists and dignitaries cast their votes from locations across all 50 states, the American territories and the District of Columbia — from the Edmund Pettus Bridge in Selma, Ala., to the iconic welcome sign in Las Vegas and far beyond to the shores of Guam, “where America’s day begins.” They offered a grand mosaic of personal identities and experiences, many speaking in raw terms about their aspirations and adversities.

Appearing with his wife in a Delaware school after his home state put him over the top, Mr. Biden was feted by his grandchildren, who burst in with balloons and streamers and wore T-shirts bearing the words “No Malarkey” — one of his favorite phrases — in what amounted to a miniature version of the celebrations that typically ensue after roll call votes. “See you on Thursday,” he said, speaking briefly to thank the delegates, and referring to the day he will formally accept the nomination.

The second night of the Democratic National Convention straddled themes of national security, presidential accountability and continuity between the past and future leaders of the party. Like the opening night on Monday, it took the form of a kind of political variety show. Hosted by the actress Tracee Ellis Ross, the program skipped between recorded tributes from political luminaries, personal testimonials from activists and voters, and various forms of music and entertainment.

Two tributes by Republicans carried particular symbolic weight for a Democratic candidate seeking to appeal across party lines: Colin Powell, the retired general and former secretary of state in the George W. Bush administration, delivered a message of support for Mr. Biden, whom he had previously endorsed. And Cindy McCain, the widow of Senator John McCain, appeared in a video about Mr. Biden’s relationship with her husband.

By voting to nominate Mr. Biden, 77, Democrats delivered to the former vice president a prize he has pursued intermittently since before the night’s most prominent young speaker, Representative Alexandria Ocasio-Cortez, was born. Two previous presidential campaigns ended in abrupt defeat: A plagiarism scandal extinguished his hopes in 1988, and his next effort in 2008 fizzled against the higher-wattage candidacies of Hillary Clinton and former President Barack Obama.

When Mr. Biden opted not to run for president in 2016, it was widely assumed that his dream of the Oval Office was finished. Instead, Mr. Biden’s long-awaited victory is a triumph of personal and political endurance, representing the apex — so far — of a slow upward climb by a man who entered the Senate in 1972 at the age of 30 as a grieving single father. No other presidential candidate in modern times has endured such a long interval between assuming a first major office and being nominated for the presidency.

As on Monday, much of the program was dominated by some of the most familiar faces from the Democratic Party’s past, including former Presidents Bill Clinton and Jimmy Carter, former Secretary of State John Kerry and Caroline Kennedy, a torchbearer of last century’s best-known American dynasty. For all the logistical novelty of a gathering transformed by a pandemic, more than a little of the content would have fit comfortably into a convention held during less threatening public health conditions.

More than a dozen younger officials whom Democrats hope to cultivate as leaders of the future were grouped together at the start of the program, giving an unusual kind of collective speech in which they delivered one or two lines at a time in prerecorded messages that were spliced together as a statement framing the stakes of the election.

Replacing the traditional keynote address, the group delivering this oratorical collage included mayors from Alabama and California; members of Congress from Texas and Pennsylvania; and state lawmakers from Nevada, Georgia and several other states.

Many of the up-and-coming Democrats were rewarded because they were early Biden supporters, but the Zoom-style speeches ended with extended remarks from a party figure who declined to make an endorsement in the primary race: Stacey Abrams, the Georgia Democrat who narrowly lost a 2018 bid for governor and is now a voting rights advocate. “In a democracy, we do not elect saviors,” said Ms. Abrams, tempering expectations about Mr. Biden. “We cast our ballots for those who see our struggles and pledge to serve.”

The party returned again and again to a few core policy themes, expanding its focus beyond the coronavirus crisis that dominated on Monday night. One segment showed Mr. Biden conferring with voters about the cost of health care, a subject he vowed to take on in a new government next year. Other Democrats emphasized the urgency of confronting gun violence and climate change, and several back-to-back speakers late in the evening called for restoring the country’s traditionally assertive role in foreign policy.

Jill Biden, the former second lady, occupied the most prominent speaking slot of the night. Dr. Biden was introduced with an extended biographical video that guided viewers through the history of the Biden family, with Mr. Biden fondly describing how they met and how his sons took to her after the death of their mother.

During her husband’s current, and perhaps final, campaign, Dr. Biden has often sought to provide an optimistic voice in a political climate of bleakness and fear. She has urged voters to imagine the relief they will feel in a Biden administration when they open a newspaper and read good news — or at least not find anything about presidential Twitter eruptions.

Dr. Biden on Tuesday described an uneasy mood gripping American families, and said she shared it. “Like so many of you, I’m left asking: How do I keep my family safe?” she said, and likened the task ahead for the country to her own family’s recovery from “the wreckage of unthinkable loss.”

“There are those who want to tell us that our country is hopelessly divided, that our differences are irreconcilable,” Dr. Biden said, while insisting that she took a different view. “We have shown that the heart of this nation still beats with kindness and courage. That’s the soul of America Joe Biden is fighting for now.”

Still, a mood of apprehension hung over the evening at times, starting with an early appearance by Sally Q. Yates, the former acting attorney general, whom Mr. Trump fired for refusing to enforce a ban on travel from Muslim-majority countries.

Ms. Yates accused Mr. Trump of having “trampled the rule of law, trying to weaponize our Justice Department to attack his enemies and protect his friends.”

Adding further to the mood of grim consequence was the release on Tuesday of a bipartisan report from the Senate Intelligence Committee detailing extensive contacts between Trump campaign associates and agents of the Russian government during the 2016 election. Ms. Yates alluded to President Vladimir V. Putin of Russia in her remarks, calling him “a dictator who is still trying to interfere in our elections.”

It was not clear whether the report would figure meaningfully in the Democrats’ remarks this week, because so much of the convention material was prerecorded. That awkward reality of production timing has already led to other conspicuous omissions: For example, in Michelle Obama’s widely lauded speech on Monday, there was no mention of Senator Kamala Harris of California, who was announced as Mr. Biden’s running mate after Mrs. Obama taped her address.

Mr. Trump, never one to miss an opportunity to attack his opponents, criticized Mrs. Obama for pretaping her address and for understating the number of Americans who have died from the coronavirus.

It was in the middle of the program that Democrats unspooled a virtual version of a venerable convention tradition, the roll call vote, and gave Mr. Biden his long-sought prize.

The presentation read as a state-by-state catalog of many of the most dangerous crises facing the country, as local activists and elected leaders were assigned to detail their own experiences with Trump-era crises as they cast their delegate votes.

There was an Alaskan fisherman who laid out the threat of climate change, a New York nurse who spoke on behalf of health care employees working in dangerous conditions, and a Puerto Rican legislator who denounced Mr. Trump’s treatment of the island.

Casting Florida’s votes for Mr. Biden, Fred Guttenberg, the father of a young student slain in the Parkland school shooting, recalled Mr. Biden’s phone call to him after the tragedy and predicted that once in office Mr. Biden and Ms. Harris would vanquish the National Rifle Association. Not every state offered a sober-minded video, though. Rhode Island, for example, used the opportunity to promote its calamari.

If the roll call vote reflected the diverse array of constituencies that make up today’s Democratic Party, some of the other speakers recalled an earlier era, among them Mr. Kerry, the party’s 2004 nominee, and Mr. Clinton.

Mr. Clinton was thrilled to be asked to appear because there was some question as to whether he would be invited to do so, according to Democratic officials who spoke to him in recent weeks. Yet his prerecorded remarks, which aired before the convention’s prime viewing hour, represented a remarkable comedown for a once-towering political figure whose 2012 speech on behalf of Mr. Obama was hailed as a triumph of political oratory.

Still, Mr. Clinton was able to offer a warm character reference for Mr. Biden, with whom he has enjoyed a mostly genial political relationship for decades. In his limited time, Mr. Clinton delivered a scathing indictment of Mr. Trump, deeming him a “buck never stops there” president who spends “hours a day watching TV and zapping people on social media.”

By contrast, Mr. Clinton said, Mr. Biden “would be a go-to-work president.” The choice, the former president said, was between a president who would continue to “blame, bully and belittle” and one who, borrowing Mr. Biden’s slogan, would “build back better.”

Tuesday’s lineup did not, however, just tilt back to the past. There were also a number of speakers who prompted considerable thinking about tomorrow, to borrow the anthem of Mr. Clinton’s 1992 campaign.

Nowhere was that more evident than in the juxtaposition of two New Yorkers who are both on the rise, and perhaps on a collision course.

Senator Chuck Schumer, who is all but certain to become majority leader should Democrats take control of the chamber this fall, spoke shortly before Ms. Ocasio-Cortez, the 30-year-old champion of the party’s left wing, whom some progressives are urging to challenge Mr. Schumer in 2022.

Mr. Schumer used his speech to issue a call to arms for Democrats to capture not only the presidency but also the Senate, and to present a common political front despite their internal differences. Speaking from New York City with the Statue of Liberty as a backdrop, Mr. Schumer promised a list of specific initiatives from a Democratic-led government, including legislation to protect voting rights and to address the cost of health care, and efforts to “restore a Supreme Court that looks out for people, not corporations.”

Ms. Ocasio-Cortez, giving a nominating speech for Senator Bernie Sanders of Vermont, used her appearance — which some liberals felt was too brief for a rising star — to nudge Mr. Biden and Democrats toward embracing a more progressive vision. The country, she said, was thirsting for “deep systemic solutions to our crises.”