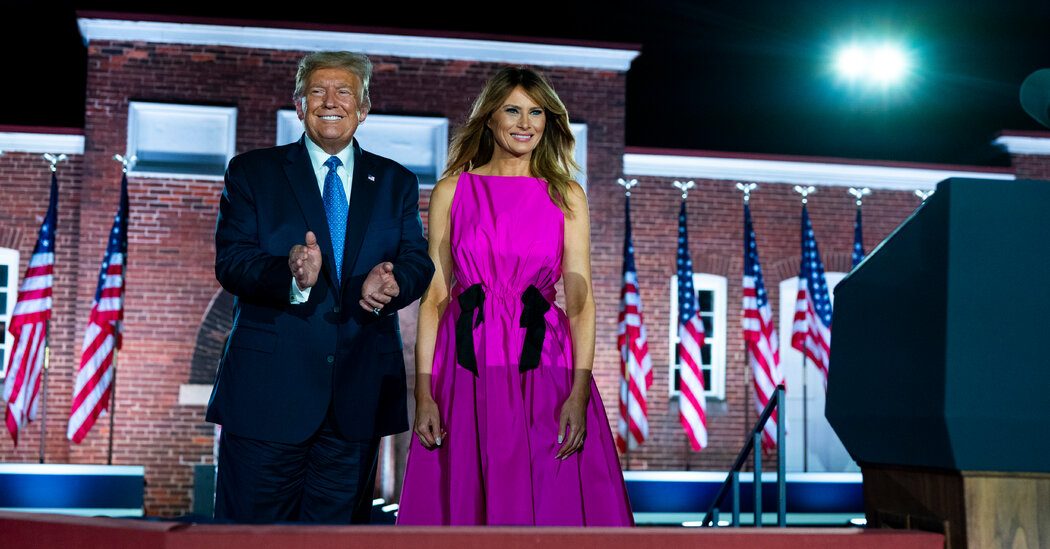 The alt-reality show on the screen this week, a Republican National Convention without platform or ideas, mixed Dear Leader adoration with primal fear jabs aimed at the weary American voter. And it may work.

But the reality outside the screen was a perfect fusion of elements central to the master con of Trumpism. The trick of tying the president to something more than the blimp of his ego — to religion, family, guns, a border wall, support for the forgotten man and woman, law and order — was exposed as an elaborate fraud in elaborate detail.

Even the riots in the cities, framed by the choreographers of fear as a preview of Joe Biden’s America, could not be time-traveled beyond the irrefutable: The violent dystopia is happening in Donald Trump’s America. The guns of August 2020 are his.

Credit Trump’s television hagiographers, veterans of vanity art from years of crafting the fiction of “The Apprentice,” with trying to make a stump of rotted timber into a golden throne. But they could not whittle away the real events of the summer.

The words of Trump’s own sister, the former federal judge Maryanne Trump Barry, hung over the opening day of the convention. “He has no principles,” she said in a leaked recording from midway through his presidency. “None! None!”

Many a past president has been burdened with siblings who drank too much, talked too much, or grifted too much. But I cannot think of one who was a central witness against the president’s character.

Add Judge Barry’s words to those of Michael Cohen, Trump’s former fixer and one of numerous felons from the law-and-order president’s inner circle. “I was complicit in helping conceal the real Donald Trump,” he says in a new ad. “And I’m here to tell you he cannot be trusted, and you shouldn’t believe a word he utters.”

On convention’s eve, Trump had tried to divert attention from the historic tragedy of his presidency, the death of nearly 180,000 Americans from Covid-19, by promoting a miracle therapeutic. But by day one of the party infomercial, the food and drug commissioner, Stephen Hahn, had been forced to apologize for vastly overstating, in a disgraceful news conference with Trump, the curative effect of blood plasma treatment.

Day three of the convention marked the six-month anniversary of Trump’s assertion that the coronavirus might soon disappear. As of that day, August 26, more than 5.8 million Americans had contracted the deadly disease.

In the spiritual realm, the downfall of the president’s most forceful evangelical promoter fit the pattern of the big scam. Jerry Falwell Jr., was ousted from Liberty University after reports that he liked to watch his wife having sex with a former Miami pool boy. This after Falwell had posted a photo on social media of himself with his pants unzipped, standing next to young woman on a yacht.

Hypocrisy among holy rollers in high places is as old as the stones of Rome’s first church. But in this case, the tie to Trump’s world is telling: Becki Falwell, wife of the disgraced evangelical, was on the advisory board of Women for Trump. She appeared in a campaign video last year promoting — What else? — traditional family values.

Let’s look away from that tawdry spectacle to a pair of bigger grifts, the border wall and the gun lobby. Was anyone surprised when Steve Bannon was charged with defrauding the poor saps who gave millions to his We Build the Wall campaign?

Mexico did not pay for Bannon’s bail. But his arrest is a reminder of the foundational fraud of Trump’s 2016 campaign: that Mexico would pay for a border wall.

Over at the gun lobby, another insider is telling all in a forthcoming book. The National Rifle Association was “rife with fraud and corruption,” writes Joshua L. Powell, who was the chief of staff to the N.R.A.’s leader, Wayne LaPierre. “We only knew one speed and one direction: sell the fear.”

Ah yes, sell the fear: the message of this convention. And using the powerful prop of the federal government, in a Hatch Act crime spree, didn’t bother anyone at the top of this den of defalcators. “Nobody outside the Beltway really cares,” said Mark Meadows, the president’s chief of staff.

He may be right. Even Trump’s biggest propagandist, Sean Hannity, is in on the con. He thinks the president is “crazy,” with a qualifying expletive, according to a new book by Brian Stelter of CNN.

Surely many of Trump’s supporters know they’re getting played. And they don’t mind, so long as they can “own the libs.” The libs, certainly, give them much to want to own. But this is a deadly game Republicans are playing.

On one night, the convention trotted out a pair of gun-toting white suburbanites to scare people into taking up arms against protesters. One night later, a white teenager with a semiautomatic rifle was arrested on a charge of gunning down several protesters.

At the same time, California is burning and the South is underwater. If you play the sucker, you won’t notice that this confederacy of con men has been unable to gaslight the seasonal rage of climate change. Nor would you care.

The Times is committed to publishing a diversity of letters to the editor. We’d like to hear what you think about this or any of our articles. Here are some tips. And here’s our email: letters@nytimes.com.

Timothy Egan (@nytegan) is a contributing opinion writer who covers the environment, the American West and politics. He is a winner of the National Book Award and author, most recently, of “A Pilgrimage to Eternity.”