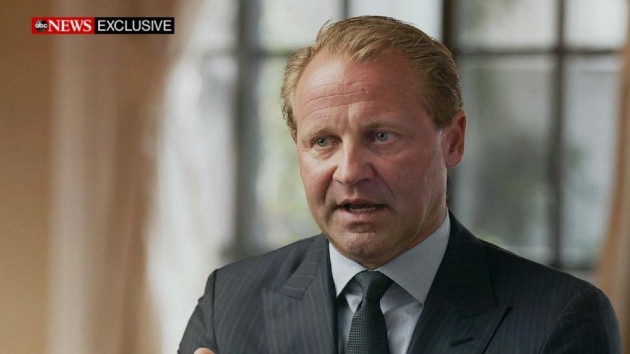 (WASHINGTON) — A former high-ranking official within the National Rifle Association is breaking ranks with the powerful gun lobby, publishing a book that accuses its leaders of decades worth of mismanagement and fraud that he says has left the organization in a state of financial and moral disarray.

In an exclusive interview with ABC News Chief Justice Correspondent Pierre Thomas, Joshua Powell, who formerly served as chief of staff to longtime NRA CEO Wayne LaPierre, said the lawsuit filed by New York Attorney General Letitia James seeking to dissolve the NRA for an array of “illegal conduct” merely scratches the surface of a much deeper culture of corruption.

“I think the NRA faces a massive threat,” Powell said. “I think that the attorney general is really at the tip of the iceberg in understanding what’s gone on at the [NRA] for 30 years.”

Powell, one of four top NRA executives named in the lawsuit, is now seeking to distance himself from the organization he once helped lead. He not only decried the alleged mismanagement of millions of dollars in charitable donations for the personal use of the organization’s top executives but also denounced the organization’s posture on the issue of gun violence, particularly in the wake of school shootings, as self-serving and dangerous.

“Gun owners across America,” Powell said, “should be horrified by what I saw inside of the NRA.”

In response to detailed questions from ABC News, an NRA spokesperson provided a statement that questioned Powell’s motives for speaking out.

“This is a fictional account of the NRA, period,” said Andrew Arulanandam, the managing director of NRA Public Affairs. “Mr. Powell was effusive in his praise of NRA leadership and the Association’s mission — right up until the day he was fired. He has now reversed course on every position he ever took during his time with the NRA. The facts are, Mr. Powell was replaced as an officer in December 2018, relieved of all of his professional obligations in fall 2019, and, thereafter, terminated in January of this year for misappropriation of funds. Those facts tell you all you need to know about the veracity of the book and Mr. Powell’s motivations.”

Powell described himself as a “huge Second Amendment supporter” with a sizable gun collection and a lifelong passion for hunting and shooting. As the NRA’s “No. 2 guy,” he said he “worked side by side” with LaPierre over several years. An NRA spokesperson, in a statement, said that Powell “had zero input or influence on the NRA’s political or legislative strategy,” but Powell says he was involved in “every single important conversation that went on in the NRA.”

But he became disillusioned with the organization and LaPierre’s leadership, he said, as LaPierre’s alleged misuse of members’ money came into focus. Powell says his work became “soul-sucking,” and he now considers it a “low point in [his] life.”

In his forthcoming book Inside the NRA: A Tell-All Account of Corruption, Greed, and Paranoia Within the Most Powerful Political Group in America, Powell’s portrayal of LaPierre, who Powell says he once “look[ed] up to,” is particularly stark.

He accused LaPierre of cynically manipulating the public dialogue on guns for fundraising purposes and “stoking a toxic debate” for the purposes of “keeping those donation dollars coming.”

“I think the biggest transgression of the NRA under Wayne was that he turned the NRA into an organization of ‘No,’ in response to any effort to quell gun violence. He helped to create and fuel the toxicity of the gun debate over the years, until it became outright explosive,” Powell writes. “Wayne in essence bowed to the most militant and extreme faction of the NRA’s five million members. Whenever the organization fell short in its funding drives, Wayne would ‘pour gasoline on the fire’ to ignite donations. And that strategy worked, time and again.”

And he condemned the hypocrisy that he said funded LaPierre’s lifestyle.

“In spite of Wayne’s attempts to paint the other side as the ‘Elites,’ he himself was the epitome of elitism,” Powell writes, “robbing every $45-dues-paying member to cover the costs of his own extravagance and his shameful mismanagement of a multi-hundred-million-dollar association.”

Powell claims LaPierre led a billionaire lifestyle, flying on private jets and having a public relations firm representing the NRA purchase more than $200,000 in custom suits from Beverly Hills Zegna for him. LaPierre, Powell writes, “explored” having that PR firm and the NRA “buy him a French country-style $6 million ‘safe house’ in a gated community on a golf course outside of Dallas.”

In a statement to ABC News, an NRA spokesperson said LaPierre is “required to travel private for security purposes, in accordance with NRA Board policy,” and that he was “asked by the NRA’s former advertising agency to incur certain wardrobe expenses given his enormous public profile.” As for the house, “not a dime of NRA money was spent” and the home was never purchased, the spokesperson said.

But his criticism is complicated by the fact that Powell himself is one of three NRA executives named alongside LaPierre as codefendants in the New York attorney general’s headline-making lawsuit against the NRA, directly linking him to the malfeasance he says he is trying to expose.

Attorney General James has alleged that LaPierre, Powell, Wilson “Woody” Philips and John Frazer “failed to fulfill their fiduciary duty to the NRA, and used millions upon millions from NRA reserves for personal use, including trips for them and their families to the Bahamas, private jets, expensive meals, and other private travel.”

The lawsuit singled out LaPierre, in particular, for allegedly enabling a culture of self-dealing, mismanagement and negligent oversight at the NRA, often for his personal benefit, but noted that he was not without his own alleged enablers.

“With the assistance of Phillips, Powell and Frazer, LaPierre abused his position as a fiduciary to the NRA to obtain millions of dollars in personal benefits in the form of undisclosed, excessive compensation,” the lawsuit said, “which includes in-kind benefits and reimbursements from the NRA and its vendors.”

According to the lawsuit, Powell’s salary tripled to more than $800,000 just two years into the job despite “numerous complaints of abusive behavior,” including two allegations of sexual harassment, which he has denied, and “evidence of illegal conduct and inappropriate spending” for which he was ultimately fired.

Both the NRA and LaPierre have dismissed the allegations in the lawsuit as a baseless and politically motivated attack.

“The NYAG’s actions are an affront to democracy and freedom,” LaPierre said in a statement in August. “This is an unconstitutional, premeditated attack aiming to dismantle and destroy the NRA – the fiercest defender of America’s freedom at the ballot box for decades. The NRA is well governed, financially solvent, and committed to good governance. We’re ready for the fight. Bring it on.”

In his interview with ABC News, Powell declined to address any of the specific allegations against him but signaled his willingness to cooperate with investigators.

“I can’t speak too much that,” Powell said. “My attorneys are talking with the attorney general’s office on it. I will tell you, I’m very comfortable with the facts of the truth.”

In a statement provided to ABC News, Powell’s attorney accused the NRA of retaliating against his client.

Powell “was fired by Wayne LaPierre and the NRA’s lawyers for his efforts to correct much of the misconduct cited in the attorney general’s complaint,” Powell’s attorney said, adding that “allegations directed at him in this lawsuit will be shown to be the result of false accusations made by Wayne LaPierre and others.”

Powell, however, insists that his rift with the NRA is an ethical one, sparked by a kind of moral awakening.

“The NRA is an absolutely horrible steward of members’ money,” Powell said. “Nobody puts their money into that association to see it mismanaged the way that it was. It is an abomination.”

Arulanandam countered, “The NRA is in great financial shape, enjoying record support, and moving on from the cloud of this individual and a handful of other fiduciaries who took advantage of the trust placed in them.”

Powell now supports universal background checks, red flag laws and other measures designed to address gun violence that have been vehemently opposed by the NRA.

“When you’re standing in the middle of America and you’re saying, ‘No way are we going to allow any changes to this country as it relates to guns,’ and you’re not a culture of solutions in solving gun crime and gun crime is a problem, then you are the problem,” Powell said. “The NRA has blood all over its hands.”

He expects to be attacked as a turncoat, someone spinning a story to sell books, but he believes someone needs to “expose the NRA for what they are” and “expose Wayne [LaPierre] for what he is.”

And as for lawsuit that threatens the very existence of the NRA — ensnaring him in the process — Powell suggests there is much more for Attorney General James to uncover.

NRA raised more in August than any month of 2016, as Biden-Trump showdown nears
Some in Durham call for stricter gun laws in North Carolina after surge in shootings
NRA Raised More Money in August 2020 Than in Any Month of 2016
President Trump Doesn’t Rule Out Replacing FBI Director Wray Over Antifa Comments
Supreme Court nominees if Biden wins: Who might be considered