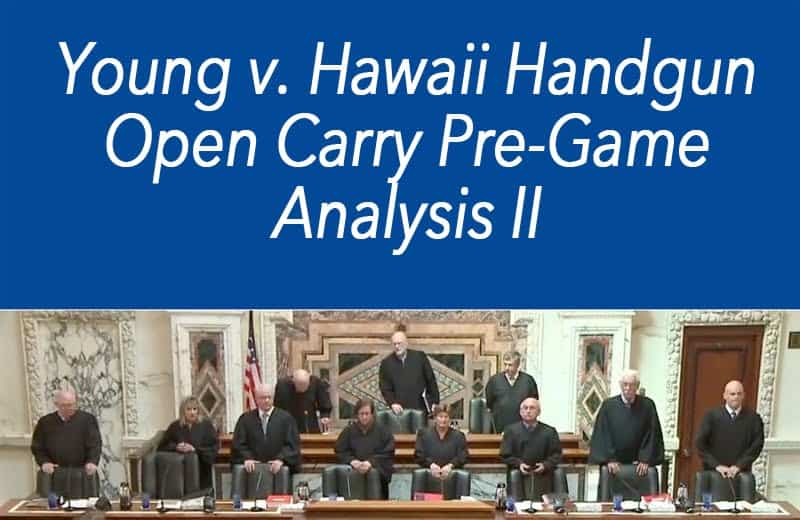 This is the third and final of my pregame analyses before the en banc oral argument in Young v. Hawaii takes place on Thursday, September 24th, at 1:30 PM.

An en banc panel in every other Federal circuit is comprised of all active members of the court of appeals. Given that there are 29 active judges in the 9th circuit, there hasn’t been an actual “Full Court” rehearing of an appeal since the court had only 15 judges.

And so, this circuit (the 9th circuit) has “limited” en banc panels. The Chief Judge sits on every en banc panel unless he is recused or the Supreme Court justice assigned to this circuit decides to sit in his place, where he is joined by ten judges randomly selected from the pool of eligible judges.

Curiously, Judge Bybee, who assumed senior status, is on the panel. Not being one of the two senior status judges who sat on the Young v. Hawaii three-judge panel, the Court’s General Orders says he is ineligible to sit on this panel. But there he is. No matter, the court makes its own rules and can change them whenever it wants to.

Interestingly, Judge Bybee is one of the three judges who sits on my three-judge panel in my California Open Carry appeal, Charles Nichols v. Gavin Newsom, et al. The success of my enumerated Second Amendment claim depends on what the en banc panel decides in Young v. Hawaii.

The en banc Young v. Hawaii panel can publish a decision that says one of three things:

Had I not challenged a license requirement in addition to California’s other bans on Open Carry then I could have found myself in the same predicament. The State of California would be required to issue me a license but the California legislature would be free to eliminate the licensing laws. That would leave me as the only member of the general public in California with a license to openly carry a firearm.

Since before I filed my lawsuit way back in 2011, I have been telling folks that if the Open Carry movement becomes successful then it will result in the greatest dissolution of power since the collapse of the Soviet Union. As you should have long since concluded, I count that as a good thing.

If I am the only one in California allowed to openly carry loaded firearms in public then there is no chance of that happening. Fortunately, I carefully crafted and argued my lawsuit so that is an impossibility.

From the 9th circuit court of appeals oral argument calendar, the en banc judges in Young v. Hawaii are:

George Young, Jr. v. State of Hawaii – George Young appeals from the district court’s dismissal of his civil rights action challenging under the Second Amendment provisions of Hawaii law pertaining to the issuance of permits to carry a concealed or unconcealed weapon.

Procedurally, the question before the en banc panel is handgun Open Carry permits. But en banc panels are not bound by procedural laws. Theoretically, this en banc oral argument could be about whatever the judges want it to be about but only one of the judges is new to the court and I highly doubt he, or any of the panel members, will stray too far from the mountain of procedural law that governs three-judge panels. Procedural law decisions that have accumulated over the decades and have been cited in thousands of decisions.

But that has happened before, in a Second Amendment en banc case, Teixeira v. County of Alameda.

Teixeria was appealing the district court’s granting of a motion to dismiss with prejudice. The procedural law in this circuit is that lawsuits should not be dismissed with prejudice unless the lawsuit is frivolous or the defects in the case can’t be cured by amending the Complaint (or by filing Declarations).

The en banc court in Teixeria held that there is no independent right to sell firearms and since there was not a would-be buyer of firearms listed as a plaintiff in the lawsuit, the appeal was dismissed with prejudice even though the ponytail wearing lawyer had asked that his lawsuit be remanded so he could add a would-be buyer of firearms, thereby correcting the defect in his lawsuit.

Similarly, Mr. Young’s lawsuit was dismissed with prejudice on a motion to dismiss. He was not allowed the opportunity to amend his complaint in order to cure any defects in his lawsuit.

I’m not saying that three-judge panels don’t also break that particular binding procedural rule, they do. I’m just saying that rules such as this are not binding on en banc panels.

Two of the judges sitting on the Young v. Hawaii panel were in the minority in Peruta v. San Diego, en banc. They would have made concealed carry permits in California “shall-issue” and would have upheld California’s Open Carry bans even though Open Carry was not at issue in the Peruta v. San Diego lawsuit and judges are prohibited from issuing opinions in which there is no live case or controversy.

In short, when the plaintiffs in a lawsuit argue, as the NRA lawyers did, that states can, should, and must impose concealed carry on the people of California, Honey Baby, it’s impossible to then around and argue your lawsuit was simply about “carry” not simply concealed carry, as the NRA did in its cert petition.

One thing I learned by reading the two justice dissent to the denial of cert in the Peruta v. San Diego cert petition is that the justices simply accept what the cert petition claims without actually seeing if the petitioner is telling the truth about his lawsuit.

In any event, the judge who wrote the vacated three-judge panel opinion in Peruta v. San Diego, an opinion that held that states can ban Open Carry in favor of concealed carry is also the judge who wrote the three-judge panel decision in Young v. Hawaii which held that the Open Carry of handguns (Mr. Young’s appeal is limited to handguns) is protected by the Second Amendment.

There is another great obstacle that argues against any type of concealed carry opinion being published.

It requires the vote of six judges to issue an opinion that decides which side wins or loses.

And so, the real question is which of the three doors I listed above are at least six judges of the en banc panel going to choose?

If at least six of the judges on the Young v. Hawaii en banc panel hold that the Second Amendment is limited to the inside of our homes then it creates a circuit split with every Federal circuit court of appeals.

But it is a lot harder to deny a cert petition where a Federal circuit, particularly the 9th circuit court of appeals, publishes a decision that creates a split with everyone else.

If you are one of the eleven judges sitting on Mr. Young’s en banc panel who wants Mr. Young to lose then that weighs in favor of your choosing Door Number two, in which case Mr. Young would lose. The practical effect of choosing Door #2 is the Hawaii law will remain, for all intents and purposes, unchanged and your opinion would be consistent with most of the Federal circuits, thereby minimizing the chances of Mr. Young’s cert petition being granted.

But then there is the added complication of my California Open Carry lawsuit.

I can’t tell you that any of the judges on the Young v. Hawaii en banc panel even knows of the existence of my California Open Carry lawsuit. Sure, Chief Judge Sydney Thomas granted my motion to file an Amicus Brief in Peruta v. San Diego, a brief the NRA and its state organization the CRPA did not want me to file but that was nearly five and a half years ago. Similarly, it has been over two and a half years since I argued my case before Judge Bybee. Hundreds, if not thousands, of appeals have landed in Judge Bybee’s inbox since I argued my appeal.

Nevertheless, my appeal is still pending, and its existence will have ramifications depending upon what the en banc panel of judges decide in Young v. Hawaii.

If a judge who would choose Door Number One is intimately aware of my California Open Carry lawsuit then he would know that the State of California asked the US Supreme Court to deny the Peruta v. San Diego cert petition and wait for a cert petition to be filed in my case, which the state mentioned by name.

If the panel chooses Door #1 and holds that the Second Amendment is limited to the inside of the home then I lose my Second Amendment claim. And if Mr. Young files a full-court petition and it is denied then it is likely that any en banc petition I file will be denied as will my subsequent Full Court petition. I will file them nonetheless.

Mr. Young would be filing a cert petition in which the State of Hawaii conceded in the oral argument before the three-judge panel, a concession it was bound by, that Mr. Young could be issued a permit to openly carry a handgun in public if he made a showing that he was going to carry the handgun in public for self-defense or in defense of property (Mr. Young did not state in his Complaint why he wanted a permit).

I would be filing a cert petition in which the State of California argued before an en banc panel of judges in the combined concealed carry cases of Peruta v. San Diego and Richards v. Prieto that the en banc judges must accept what the Heller decision said. That there is a right to Open Carry that extends beyond the curtilage of our home into public places but there is no right to carry concealed.

The State of California is bound by that argument given it won that appeal. And so the State of California argued in my appeal that the Heller decision was wrongly decided. The State argued that, as per the McDonald decision, my three-judge panel must conduct its own historical analysis and then hold that the Heller decision was wrong, there is no right to openly bear arms beyond the curtilage of our homes.

Not forgetting that under California law, I am prohibited from carrying any loaded firearm in the curtilage of my home, which the Supreme Court has always treated the same as the inside of our home.

That means that if you are a judge who thinks the Heller, McDonald, and Caetano decisions were limited to one’s home (Caetano was a homeless woman) then to uphold California law would be to uphold a law that bans the carrying of a loaded firearm in part of one’s home. Not even the 9th circuit court of appeals has published a view of the Second Amendment that restrictive. It came close, but that law required one to lock up his firearms while they were not being carried.

My crystal ball will see much more clearly after the oral argument takes place.

Will California Open Carry be the Last One Standing in Court?