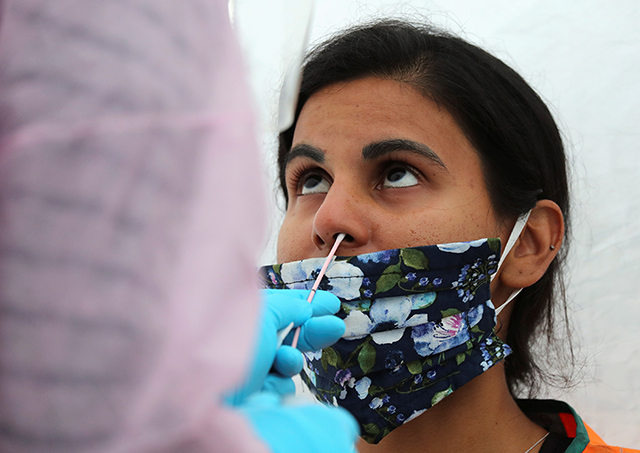 Pandemic of ignorance. The Star Tribune’s Jeremy Olson reports: “The CDC pulled its federal surveyors out of Minnesota this week following reports of verbal abuse and intimidation, including an incident in the Iowa border town of Eitzen, Minn., in which a survey team walking to a house was blocked by two cars and threatened by three men, including one who had a gun.”

More gunshots, more police sirens. KARE 11’s Deevon Rahming reports: “Amid fear and frustration over the spike in crime, residents on the south side reached out to the city’s Public Safety Committee during a meeting Thursday with a proposal to help. ‘We were hoping that they would listen to us,’ said [Central Neighborhood neighbor Karen] Forbes. But their ideas weren’t heard.”

A window into the Dorrs, via NPR. City Pages’s Hannah Jones reports: “The Dorrs hate Democrats, sure. And they’re not exactly chummy with the media, either. But their favorite targets aren’t liberals or journalists. They’re hyper-conservative Republicans and the National Rifle Association (NRA) – people and entities that do a lot to give the average American relatively unfettered access to firearms. But, as the Dorrs see it, not enough. ‘We’re a lot more aggressive,’ Aaron [Dorr] tells [NPR reporter Lisa] Hagen in Episode 1.”

Washington Post editorial. Rep. Ilhan Omar: “As offensive as [President Donald Trump’s] remarks are, I have seen the media and even Democrats fall for his argument. We need to win over former Trump voters, the thinking goes, and we can’t do that if we embrace progressive leaders and policies. But while winning swing voters is important, there is a key constituency Democrats need in November that is almost entirely left out of the conversation: nonvoters.”

Some good financial news. The Pioneer Press’ Ross Raihala reports: “St. Paul’s Penumbra Theatre announced Thursday that the company will receive a $2.5 million grant over the next four years from the Ford Foundation. … ‘It’s very exciting,’ said artistic director Sarah Bellamy. ‘It’s a powerful recognition of our past and a nod to the innovation of our future.’ … Penumbra is one of 20 arts organizations around the country to get funding from the Ford Foundation’s newly announced and unprecedented $160 million initiative called American Cultural Treasures. The grants are going to BIPOC (Black, Indigenous and people of color) organizations and, like Penumbra, represent the largest donations ever for most of them.”

“Reality exists in the human mind, and nowhere else.” CNN’s Donie O’Sullivan and McKenna Ewen report: “At a Trump rally in Bemidji, Minnesota, last Friday, grievances against social media platforms Twitter and Facebook were a common refrain. Many of the President’s supporters told CNN that they felt the platforms’ fact-checking processes were biased against conservative viewpoints. Others discussed social media posts that contained manipulated media as if they were real. … Asked last week why Trump shares fake videos and baseless conspiracy theories about Biden, Tim Murtaugh, Trump campaign communications director, invoked a meme defense. ‘You call it a fake video. What it is is an internet meme,’ he said. ‘Those are very frequently done to make a political point.’”

Count me in: “Judge says 2020 census must continue for another month” [Star Tribune]

Q&A by Claudia Rankine: “Lizzo on Hope, Justice, and the Election” [Vogue]

For those of you who celebrate: “Red (leaf) alert! Fall colors already peaking in northern Minn. after recent freezes” [MPR]

Cheesy: “Appetites: On a quest for the best frozen pizza” [MPR]