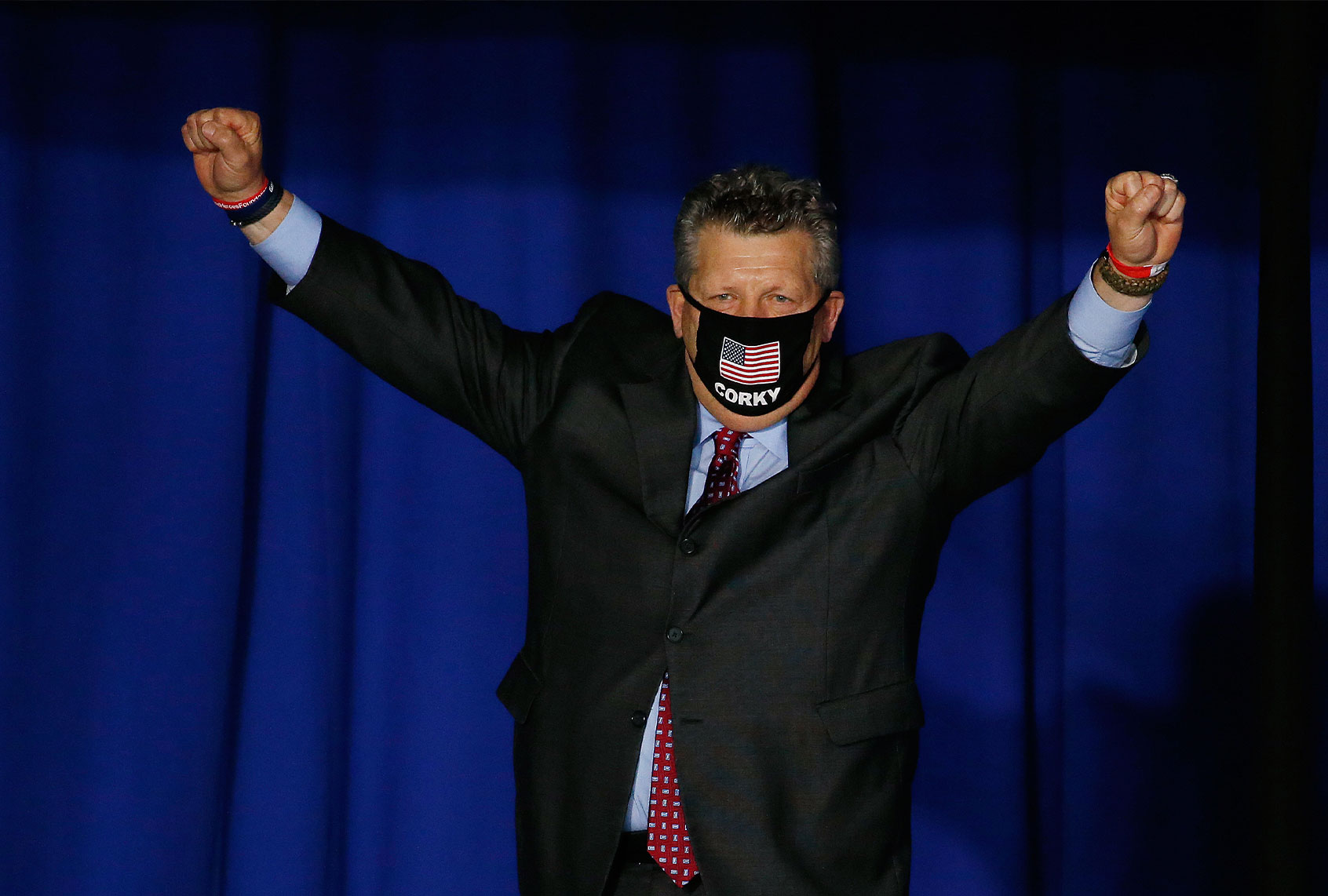 After ammunition and body armor retailers were unsuccessfully sued by the parents of Jessica Ghawi, who was killed in a 2012 mass shooting, the companies sought to recoup their legal fees. According to the victim’s mother, her family declared bankruptcy after it was ordered to pay more than $200,000 by a judge. Now, Corky Messner, the Republican whose law firm represented one of the retailers, is running for a U.S. Senate seat in New Hampshire on a staunchly pro-gun platform.

Messner told WMUR last month that he opposed any gun control measures, and he would support rolling back some existing gun safety laws already on the books. Messner has touted his endorsement from the National Association of Gun Rights, which has attacked the National Rifle Association (NRA) for being “soft” and has called for “absolutely NO COMPROMISE on gun rights issues.” The group has spent “more on pro-gun lobbying than the NRA in the aftermath of the Sandy Hook mass shooting in 2012,” according to Politico.

Messner’s law firm, Messner Reeves, was previously involved in a case which led to the eventual bankruptcy of the family of one of the victims of a mass shooting at a movie theater in Aurora, Col. It was the first-ever case where a plaintiff was forced to pay defendants’ legal fees under a Colorado law shielding ammunition and weapons retailers from most liability.

James Holmes was sentenced to 12 life sentences and an additional 3,318 years after he was convicted of killing 12 people and wounding 70 others during a screening of “The Dark Knight.” One of the dead was Ghawi, a college student pursuing a career in sports journalism who had narrowly escaped another mass shooting a month earlier.

Sandy and Lonnie Phillips, Ghawi’s parents, sued the retailers which sold Holmes ammunition and body armor in 2014 in spite of laws shielding them from liability. The lawsuit argued that Lucky Gunner, which sold Holmes more than 4,000 rounds of ammunition; The Sportsman Guide, which sold him a 100-round magazine and 700 rounds; BTP Arms, which provided the tear gas canisters used in the attack; and Bullet Proof Body Armor negligently sold Holmes weapons used in the attack online without assessing his state of mind.

“A crazed, homicidal killer should not be able to amass a military arsenal, without showing his face or answering a single question, with the simple click of a mouse,” the Brady Center, the gun control advocacy group which filed the lawsuit on behalf of the family, said at the time. “If businesses choose to sell military-grade equipment online, they must screen purchasers to prevent arming people like James Holmes.”

The lawsuit did not seek any monetary damages but rather asked a court to order the retailers to change the allegedly “negligent and dangerous business practices” which allowed Holmes to purchase his weapons.

Sandy Phillips later told Time that the case was “dismissed before it was ever heard.” The retailers asked a judge to order the family to pay the more than $200,000 in attorney fees incurred as a result of the lawsuit.

One of the firms pushing for attorney fees was Messner Reeves, which defended BTP Arms in the Phillips’ lawsuit. Bruce Montoya, an attorney at the firm, filed a motion asking a court to order Ghawi’s family to pay. Montoya submitted an affidavit showing the hours he worked on the case, for which he charged $300 per hour for himself and $225 per hour for two other associates with the firm.

Denver Judge Richard Marsch ultimately sided with Messner Reeves and the other attorneys involved in the case, ordering Ghawi’s family to pay $203,000 to BTP Arms, Lucky Gunner and The Sportsman Guide. Brian Platt, the owner of BTP Arms, was awarded more than $30,000 in legal fees, including those from Messner Reeves.

“Even though Matsch’s decision apparently marks the first time that fees have been granted under Colorado’s law shielding gun and ammo dealers from liability, the judge didn’t provide any explanation of his reasoning,” according to Reuters.

A spokesman for Messner Reeves said the firm did not collect the $9,854 in legal fees to which it was entitled after Salon reached out to the campaign.

“Messner Reeves LLP did represent BTP Arms, a tear gas distributor. It was quickly determined by the respected and Honorable Richard M. Matsch at the time this lawsuit against our client was ‘pursued for the political purpose of the Brady Group, and lacked merit.’ While attorneys fees were awarded, they were not collected in exchange for the Brady Group voluntarily dropping any appeal,” Messner Reeves spokesman Andy Boian said in a statement.

The judge suggested that the family’s “sponsors” at the Brady Center pay the fees, but the decision reportedly forced the family into bankruptcy. Sandy and Lonnie Phillips held minor regional positions at Brady, but Sandy Phillips said they lost those after the lawsuit, too.

“We have lost everything that most people value . . . our jobs at Brady (two weeks before Christmas of that year) our financial security due to the Brady PLCAA lawsuit and broken promises on their part, our home, our lifestyle, and some friends along the way,” she said in a Facebook post earlier this year. “BUT nothing compares to having Jessi ripped from our lives by six AR 15 .223s turning her tiny body to hamburger meat.”

Sandy Phillips was “surprised” when former presidential candidate Hillary Clinton referenced her family on the campaign trail in 2015.

“One of the families of a young woman who was murdered by him sued to say, ‘You know, how can you have no accountability at all? No legal responsibility whatsoever to sell weapons and ammunition online?” Clinton said during an event in New Hampshire. “And they brought a lawsuit, and because of the law that the Congress passed giving immunity, they lost. And then to add insult to injury and to grief, under a state law, they were told they had to pay the NRA $200,000 for the legal defense of the guy they sued. This is crazy, folks.”

Sandy Phillips, a legal gun owner who supports the Second Amendment, has continued to campaign for gun safety reforms and the repeal of the law which prevented her lawsuit from moving forward.

“Everyone else in society has a duty to use reasonable care to not injure others — except gun and ammunition sellers,” she wrote in an op-ed. “We believe that the judge’s decision was wrong, and that it is unconstitutional to financially punish people for bringing a lawsuit, especially a public interest case that did not seek a dime.”