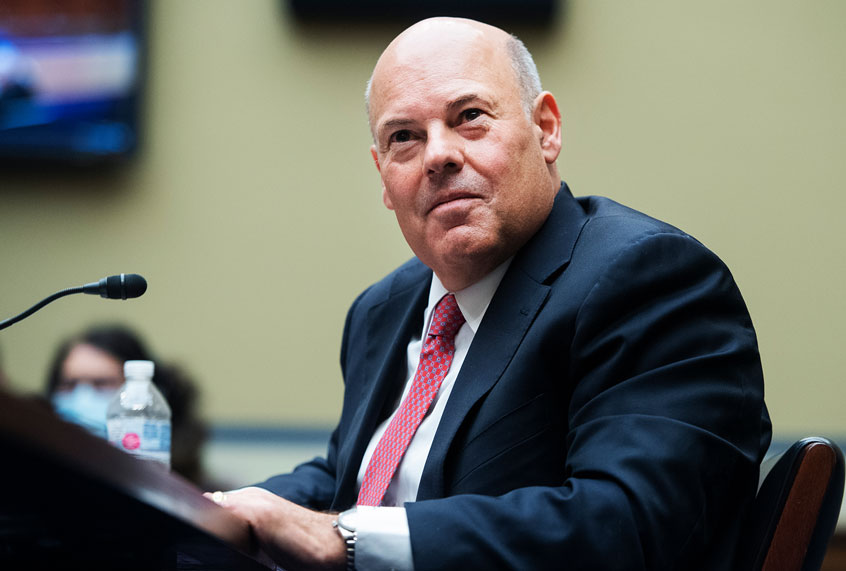 Postmaster General Louis DeJoy, whose political contributions are the subject of multiple congressional investigations and a campaign finance complaint, donated nearly $700,000 to the host committee who put on the Republican National Convention, according to recent Federal Election Commission filings.

One $250,000 donation came the same day that DeJoy gave $210,600 to Trump Victory, a donation which is currently part of an inquiry led by Senate Democrats into a series of donations surrounding the nomination of his wife, Aldona Wos, to be the next U.S. ambassador to Canada.

DeJoy, a Republican mega-donor and logistics mogul, was the convention’s lead fundraiser before being appointed postmaster general last spring by the U.S. Postal Service (USPS) Board of Governors. Congressional Democrats and secretaries of state have questioned a series of reforms made by DeJoy over the summer, which they allege appear to be part of a coordinated effort to leverage the USPS to aid the re-election of President Donald Trump.

DeJoy has denied the allegations.

Filed last Friday, the Charlotte Host Committee’s report lists four contributions from DeJoy between late December 2018 and March 31 of this year, which amount to a total $685,230.

DeJoy’s penultimate donation of $250,000 came Feb. 19, 2020, or the same day he made the $210,600 donation to Trump Victory, the joint fundraising vehicle shared between the Trump campaign and the Republican National Committee. Six days later, Trump nominated Wos to be an ambassador.

The donations align with a series of major donations made by DeJoy to the Trump campaign and Senate Republicans leading up to his wife’s nomination as ambassador, a Salon investigation revealed. Senate Democrats announced last month that they were opening an investigation into the donations. Wos’ Senate confirmation remains pending.

DeJoy was previously tapped to raise cash for the 2020 Republican National Convention. Host committees — non-profits — depend on corporate and individual donors to fund the extravagant nomination celebrations every four years. The high-profile political events are an attractive target for corporations with lobbying interests, Brett Kappel, a nonprofit and lobbying law expert at D.C. firm Harmon Curran told Salon.

“The host committee is a 501(c)(3) organization, so these contributions are tax deductible,” Kappel said. “Lobbying expenditures, in contrast, are not tax deductible as business expenses.”

This year’s committee reported taking in more than $44 million in receipts, and it spent more than $38 million of that amount. Trump all but canceled the convention amid after North Carolina Gov. Roy Cooper, a Democrat, refused to suspend public health restrictions to limit the spread of the coronavirus pandemic. While Republican delegates still met formally in Charlotte, Trump ultimately gave his acceptance speech from the White House lawn.

DeJoy’s $700,000 outstripped contributions from some corporations. Software maker Oracle, for example, which has business before the Trump administration in the form of a bid to purchase the social media platform TikTok, contributed $500,000. Private prison corporations Geo Group and CoreCivic gave $250,000 each. Telecom giant AT&T donated $1 million.

A local company called Charlotte Pipe & Foundry — a century-old company owned by the wealthy Dowd family, whose executives have been reliable financial backers of Trump and Sen. Thom Tillis, R-N.C. — gave $500,000 to the committee.

Charlotte Pipe, which employs some 1,200 people, announced this May that it would relocate its flagship plant out of the city to nearby Stanly County. David Teppen, the hedge-fund billionaire and owner of the Carolina Panthers, has eyed the company’s property for a new stadium.

Charlotte Pipe also gave $25,000 to the NRA Victory Fund in August 2020, the same month as the convention, FEC records show. The donation was itemized as “other federal receipts,” meaning it was not money but a permitted equivalent such as gold or securities. Charlotte Pipe, which is privately owned, does not have shares to sell off, and the company does not manufacture gun parts, a company spokesperson told Salon. (The Tillis campaign has been accused of illegal coordination with the National Rifle Assocation.)

The same day that Charlotte Pipe gave $250,000 to the convention committee, the company donated $25,000 to Results for NC, a PAC affiliated with the Tillis campaign. Another Tillis-backing super PAC, American Crossroads, has poured millions into helping the embattled candidate salvage his re-election bid. It is also led by a USPS official.

A House committee announced last month that it was launching its own investigation into DeJoy following reports that he led an alleged criminal straw donor scheme by reimbursing employees at his former company for donating to GOP candidates. That was followed by an announcement from Senate Democrats of the probe into DeJoy’s donations connected to his wife.

Later that month, a campaign finance watchdog filed an FEC complaint against DeJoy and his former company XPO Logistics alleging that the scheme continued at least through 2018, in total allowing DeJoy to disguise possibly hundreds of thousands of dollars in political contributions.

Those contributions included over $50,000 to Trump Victory.