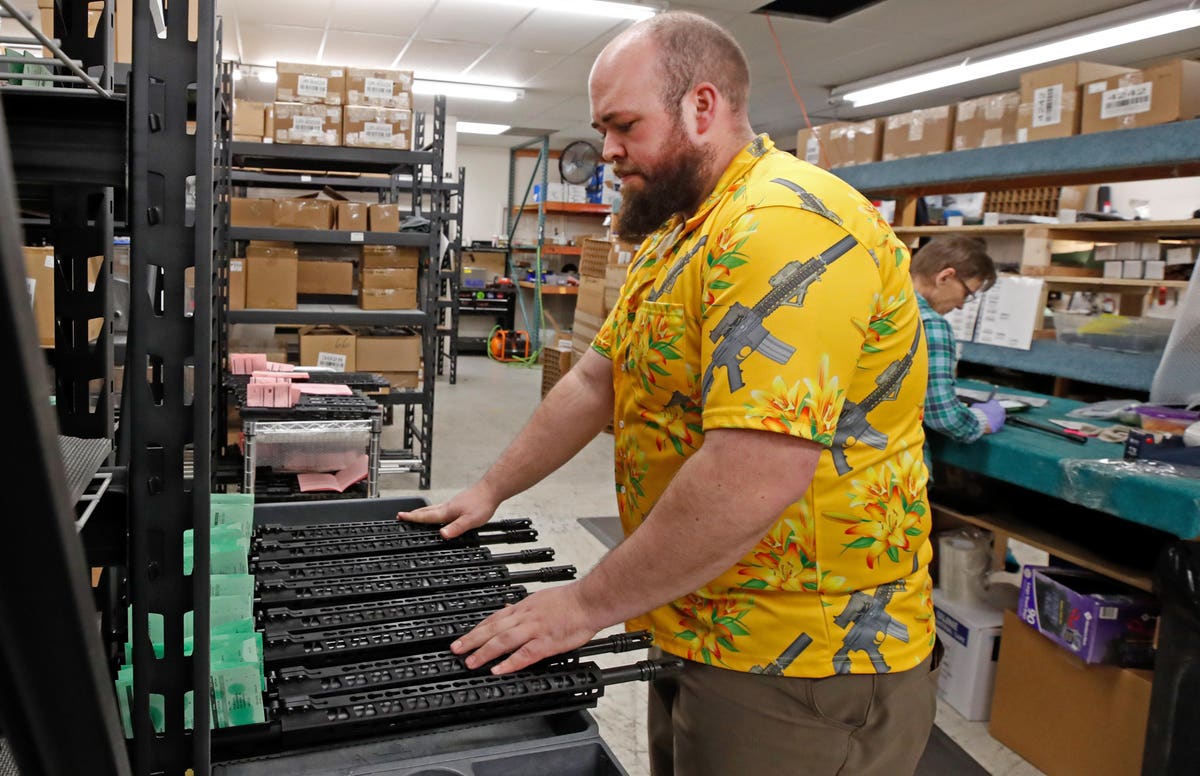 Gun stocks plunged during the market rally following Election Day, as investors in Smith & Wesson and Sturm, Ruger worried about their prospects under a potential Democratic White House.

Smith & Wesson and Sturm, Ruger are the only publicly traded gun stocks. They are both venerable market leaders that make a variety of firearms, including hunting rifles, shotguns, pistols, revolvers and assault weapons, including AR-15s and other tactical-style semiautomatic rifles. Smith & Wesson makes a variety of AR-15s as part of its M&P 15 line, and Sturm, Ruger makes a version called the AR-556.

The industry prefers to call modern sporting rifles, or MSRs. Whatever the name, assault rifles have been targeted by the Biden-Harris campaign with an aggressive gun control policy that includes a ban on manufacturing. AR-15s are popular among American consumers but have also been used in the deadly mass shootings, including at Sandy Hook Elementary in Newtown, Conn., in 2012, Pulse Nightclub in Orlando in 2016, the Harvest music festival in Las Vegas in 2017, and Stoneman Douglas High School in Parkland, Florida, in 2018.

The next president of the United States had not been determined by Thursday morning, though former Vice President Joseph Biden, a Democrat from Delaware, was leading in the race with his running mate Sen. Kamala Harris (D-California.) The race could potentially swing in favor of President Donald Trump, a Republican favored by gun companies. But the prospect of a Democratic victor has put the fear of gun control in the firearms industry.

“Biden’s plan included confiscation of lawfully owned semiautomatic firearms, reclassifications of the firearms under the National Firearms Act of 1934, banning the sale and production of the most-popular selling centerfire rifle on the market today and repealing legislation that would expose the industry to harassing activist lawsuits designed to bankrupt manufacturers,” said Mark Oliva, director of public affairs for the National Shooting Sports Foundation, the gun industry group.

Trump has no plan for gun control. But if Biden-Harris win the White House, they plan to expand background checks, ban the manufacture of assault weapons and high capacity magazines, and impose more restrictive gun control measures on the assault weapons already in private ownership. Owners would need to register their assault weapons under the National Firearms Act, which requires a $200 tax and a longer waiting period of eight to 10 months instead of about 20 minutes for other guns. The NFA restrictions currently apply to full auto machine guns and silencers.

The Biden-Harris plan includes a nationwide buyback for owners of AR-15s and other assault rifles who don’t register with the NFA. This is similar to the buyback implemented by the Australian government after a mass shooting there in the 1990s.

The Biden-Harris plan would also hold gun manufacturers accountable by repealing the Protection of Lawful Commerce in Arms Act, which protects them from being held civilly liable for their products.

Gun sales have been booming since March, when the coronavirus pandemic closed down major cities and flattened the economy, causing tens of millions of workers to lose their jobs. More than 9.4 million Americans have been infected with Covid-19 and 233,600 have died. Fueled by outbursts of civil unrest prompted by police brutality in cities scattered across the country, Americans have been buying guns for self-protection. The Federal Bureau of Investigation has conducted 32.13 million background checks for gun purchases during the first 10 months of the year, already breaking an annual record before the year is through. FBI background checks occur every time someone buys, or tries to buy, a gun or guns from a federally-licensed dealer, which includes all gun shops. While background checks are not the same as sales, the FBI data is the closest nationwide proxy.

Many of them are new buyers, including women, senior citizens and Black Americans. Nearly 7 million Americans bought a gun for the first time during the first 10 months of the year, according to the NSSF.

But there could be a silver lining for the gun industry if Biden-Harris win the White House: the manufacturers and retailers could sell more guns, at least in the short term, as gun buyers stockpiled ahead of the anticipated gun control measures. When Trump won the White House four years ago, gun sales plunged, even though he was endorsed by the National Rifle Association. He was elected after a record-breaking runup during the tenure of President Obama, a Democrat who tried to pass more restrictive control on assault weapons. The fear of gun control had been driving sales, and with the election of Trump in 2016, that fear dissipated.

Brian Rafn, a recently retired gun analyst from Morgan Dempsey whose family owns shares of Sturm, Ruger, said the threat of liability for gun manufacturers is a leading cause of the gun stock sell-off.

But without a Democratic majority in the House or Senate, he said Biden-Harris would face an uphill road in trying to pass any sort of gun control legislation.