The former vice president’s “Plan To End Our Gun Violence Epidemic” seeks to repeal the Protection of Lawful Commerce In Arms Act, which affords firearms dealers and manufacturers legal protection against lawsuits that may result from the misuse of weapons or ammunition sold to the public. Such a measure would effectively leave dealers and sellers vulnerable to wrongful death and injury lawsuits, senior vice president of the Gun Owners of America Erich Pratt told the Daily Caller News Foundation.

“[Biden’s plan] means that gun manufacturers could ultimately be put out of business through frivolous lawsuits, Pratt said in a phone interview.“It’s totally irresponsible, imagine holding Ford or GM responsible for the damage caused by hit-and-run drivers. We wouldn’t tolerate that and yet that’s exactly the type of legal theory they’re trying to put on gun manufacturers.”

Kevin Jamison, a Missouri self-defense lawyer and firearms trainer, said “The guys pushing these lawsuits, they don’t care if they win. They care if they can force these companies to hemorrhage money. They are in the business of putting gun companies out of business.”

Remington Arms Company, which has been producing firearms since 1816, went bankrupt in late September after the corporation was sued by the families of the victims involved in the deadly 2012 Sandy Hook school shooting, according to Fox Business. The gunman used a Bushmaster, a sub-company of Remington, AR-15 during the shooting, Fox reported.

The families argued that the Bushmaster XM15-E2X “posed an unreasonable and egregious risk of physical risk to others” and insisted that the 200-year-old gun company was negligent in selling the weapon to civilians, according to WBUR. Outdoor retail giant Cabela’s was also sued in early November for selling ammunition to a 19-year-old who accidentally killed a friend with a handgun, The Buffalo News reported. 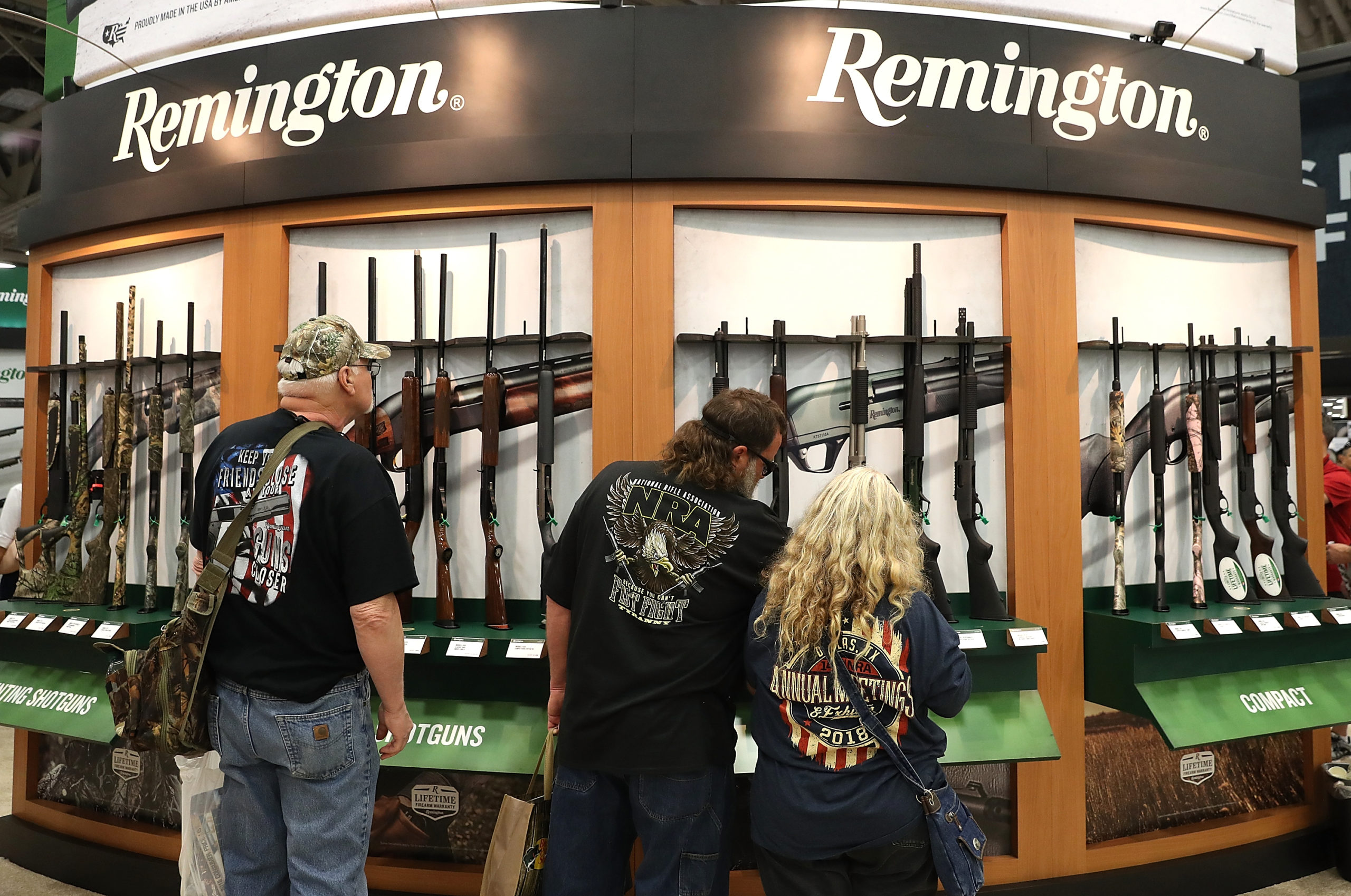 Attendees look at a display of Remington shotguns during the NRA Annual Meeting & Exhibits at the Kay Bailey Hutchison Convention Center on May 5, 2018 in Dallas, Texas (Justin Sullivan/Getty Images).

Pratt said the country will be seeing “more” of these lawsuits and he added that Remington’s bankruptcy “was the desired intent” of the legal procedure. Jamison called the theories behind the gun litigation “absurd” and said the lawsuits have been allowed to continue even under the Commerce In Arms Act because of misguided courts.

“They’ve gotten away with it because the courts have indulged these absurd theories of law,” the gun lawyer said. “It’s a disaster. It has been very bad the last few years, yes, but it’s going to be the death of mom and pop and gun shops — individually-owned gun shops — and some of these companies.”

Pratt sees the potential for America’s gun industry as a whole to crumble under the weight of litigation that could result from Biden’s plan.

“The idea of the left would be ‘oh sure you can have a Second Amendment right, too bad you just can’t find any guns that are being produced and manufactured,’” he said.

Jamison said, “If they destroy enough companies or force them to adopt their rules of procedure then there will be no place to buy guns and that’s what they’re looking for. They want to make it as expensive to own a gun as humanly possible — and as difficult. If they get even part of their wish list, they won.”

Everytown For Gun Safety, a prominent anti-Second Amendment organization, which supports a position similar to Biden, said the Commerce In Arms Act allows “manufacturers and sellers” to “skirt the law” and “shield” themselves from legal repercussions.

“An extraordinary law has provided gun manufacturers and sellers who skirt the law with a unique, broad immunity from legal accountability. [The Protection of Lawful Commerce In Arms Act] PLCAA gives gun industry members a shield from the lawsuits that are most often used in the United States to hold businesses accountable for products or practices that harm people,” the organization wrote on their webpage.

“PLCAA blocks legal responsibility for gun manufacturers that have failed to innovate and make guns safer, and for manufacturers, distributors and dealers with irresponsible, reckless and negligent sales practices that contribute to the flood of illegal firearms in our communities.”

The two advocates, who firmly disagree with Everytown’s view, said protections for the gun industry hinge on the Senate races in Georgia which will determine party control of the Senate. If Democrats obtain both seats, they would have control of both congressional chambers come January. (RELATED: REPORT: Biden’s Gun Tax Could Cost Gun Owners Upwards Of $34 Billion)

“All we can hope for is that Joe Biden does not have his allies in control of both Houses, even then it’s going to be a war every day for the next four years,” Jamison said. “We’ve just got to buckle down, make sacrifices, build up a war chest to finance this litigation.”

The gun lawyer remains hopeful that fight could be won in his favor.

“We can win this thing, but it’s not going to be easy, simple or cheap,” he told the DCNF.