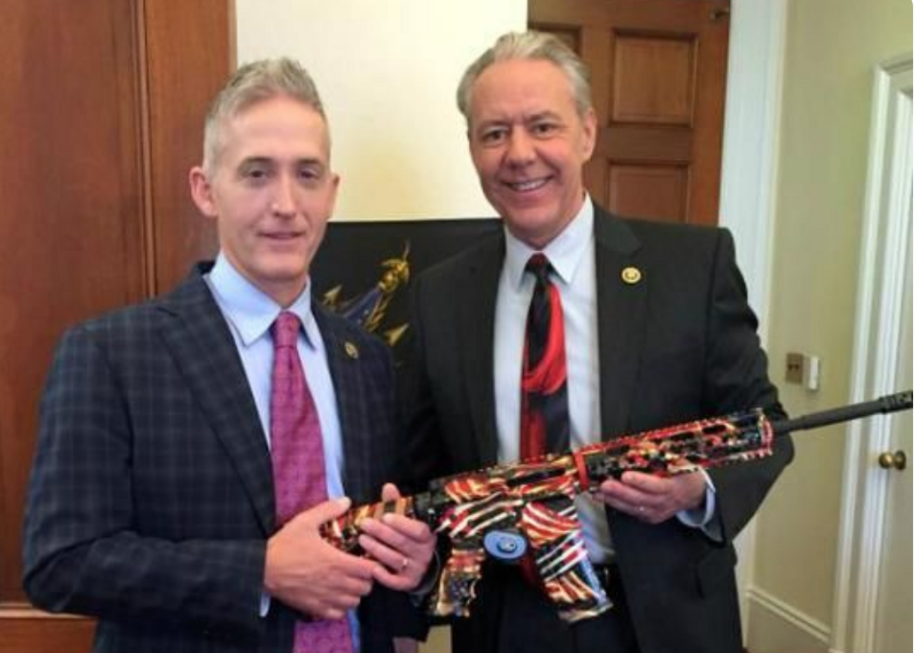 A kindred spirit can be found in the hardcore QAnon conspiracy theorist Marjorie Taylor Greene, the representative-elect from Georgia’s 14th congressional district. She said in a written statement, “Not only do I support members of Congress carrying a firearm, I believe every American has that right. I will work every day to end ALL gun free zones.” This presumably includes the visitors galleries in congressional chambers where anyone with an easily acquired pass can watch the proceedings.

Washington, D.C., has some of the strictest gun laws in the nation, but court rulings in the past dozen years have weakened them just as state governments have weakened their own gun laws under pressure since the mid-1980s from the National Rifle Association and even more extreme gun lobbies. Under a half-century-old congressional regulation, however, no federal or District of Columbia laws “shall prohibit any Member of Congress from maintaining firearms within the confines of his office” or “from transporting within Capitol grounds firearms unloaded and securely wrapped.”

If they wanted to, members could easily violate the ban on carrying in congressional chambers because they are privileged to go around the metal detectors set up to stop visitors from wandering through the Capitol armed. In addition to Buck, several members are known to keep firearms in their House or Senate offices. But when Democrats on the House Committee on Administration asked Capitol Police two years ago exactly how many lawmakers carry firearms, they received no reply.

Democratic Rep. Jared Huffman of California’s 2nd District told the AP in 2018, “Members could have a loaded AK47 sitting on their desk and no one would ever do anything about it.” That’s no exaggeration. In 2015, after notifying Capitol Police, Colorado’s 4th District Rep. Ken Buck brought his AR-15 imprinted with American flags to his office and stashed it there after posing for a photo. Having a gun in the office just isn’t good enough, however, for 2nd Amendment absolutists who apparently believe the nation’s founders would approve even though there is no evidence any of them carried their flintlocks into congressional chambers.

Although numerous elected Democrats are gun-owners, those cited by Axios were opposed to ending the ban. Rep. Elissa Slotkin of Michigan’s 8th District said, “I know that [members carrying guns] are here. And I think that ban should continue. And if there’s folks who are suggesting that they’re going to do otherwise, then the Capitol Police and the sergeant at arms should make clear to them what the rules are and the consequences.”

Said Rep. Ruben Gallego of Arizona’s 7th District, “We’re in a very secure area of this Capitol. I think it’s more for making a political statement than a personal security, and I think this is not the place for that.”

Likewise, the Republicans Axios contacted expressed support for ending the ban. Rep. Liz Cheney, Wyoming’s lone member in the House who as Conference Chair ranks third-highest the House Republican leadership, said ditching the ban is okay with her. “I am proud of all of the members we’ve elected and their defense of our Second Amendment rights.”

In the olden days, many towns like Dodge City, Kansas, now iconic for their 19th century Wild West reputations, required the era’s gun toters within the city limits to check their firearms with the local marshall or other authorities. Republicans clearly think that doing likewise at the door of the House or Senate chamber would violate the sacred rights of today’s gun toters.