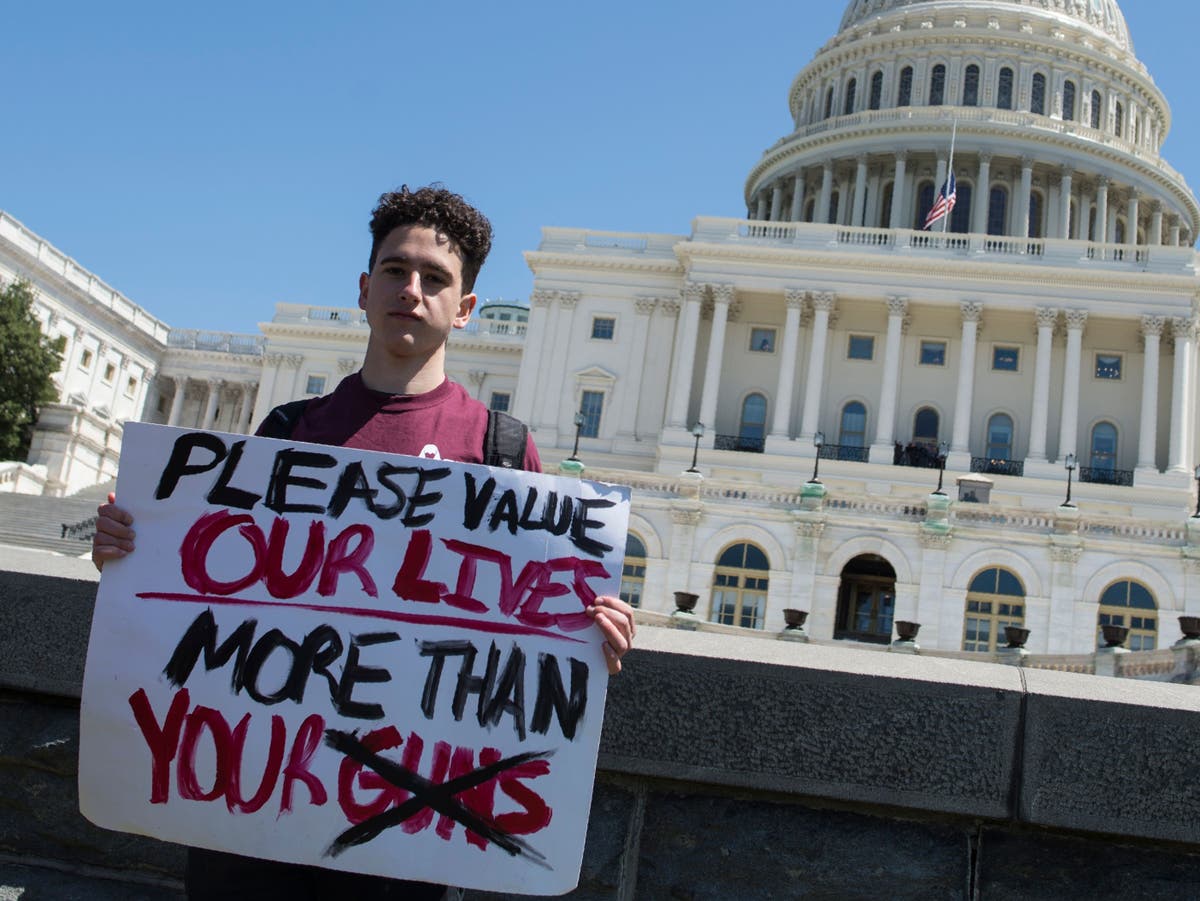 “I am calling on Congress to enact common sense gun law reforms, including requiring background checks on all gun sales, banning assault weapons and high-capacity magazines, and eliminating immunity for gun manufacturers who knowingly put weapons of war on our streets,” he said in a statement on Sunday.

“We owe it to all those we’ve lost and to all those left behind to grieve to make a change. The time to act is now.”

The president’s words will bolster those who have long fought for gun reform. From the start of his election campaign, Mr Biden made gun control one of his top issues. He famously confronted a Michigan plant worker who accused Mr Biden of wanting to “take away our guns”, telling the man he was “full of s***”.

His campaign platform also laid out an aggressive list of plans that he promised to start implementing as soon as he entered the Oval Office.

But so far, gun issues have not risen to the top of the pile. Mr Biden signed a stack of executive orders in his first weeks, mainly to dismantle parts of the Trump agenda. And with Congress focused on Mr Trump’s second impeachment trial, plans for an assault weapons ban have been put on the back-burner.

But even with a weakened National Rifle Association, which has been riven by financial difficulties and lawsuits, Mr Biden has to work with an unusually fine balance of power on Capitol Hill.

With Democrats operating on a slim Senate majority and controlling the House only narrowly, he can hardly afford to expend any goodwill – particularly at this fractious moment in American political life. Congress is currently preoccupied with hammering out a $1.9tn Covid-19 relief package which will have significant financial consequences for tens of millions of Americans.

But as space opens up for other items, gun reform is expected to rise up the agenda. Mr Biden’s campaign promises included a wholesale ban on the manufacture and sale of assault weapons; a push to roll out personalised “smart gun” technology; closing various gun ownership loopholes, and banning the online sale of guns and ammunition.

Mr Biden has advocated for gun control throughout his Washington career. In the 1990s he helped drive through two pieces of landmark legislation: the 1993 Brady Bill, which instituted background checks for gun purchases, and the 1994 assault weapons ban, which expired in 2004.

During the Obama administration, following a series of mass shootings including at the Sandy Hook Elementary School, Mr Biden as vice president took the lead on trying to shepherd through tighter gun control laws. However with an intransigent Republican-led Congress for three quarters of their time in office, game-changing reforms to expand background checks and keep guns out of dangerous hands were defeated or rolled back.

The last ten years have seen little in the way of major gun control legislation even as America was faced with some of its worst-ever mass shootings.

In October 2017, a lone gunman fired from a hotel room window onto a music festival in Las Vegas. He killed 61 people and injured more than 400 others. It focused attention on the shooter’s use of a “bump stock”, a device that allows a semi-automatic weapon to be fired more rapidly. A few months later, the Trump administration announced plans to outlaw bump stocks altogether.

In 2020, a right-wing commentator Marjorie Taylor Greene was elected to Congress to represent Georgia’s 14th Congressional District. While she had pushed a variety of conspiracy theories, including QAnon, she had also agreed with a 2018 Facebook post that the Parkland mass shooting was a so-called “false flag” event. The congresswoman was also filmed hounding Parkland survivor, David Hogg, in the street.

Amid these tensions, Mr Biden is casting his approach to gun safety as not just common-sense technocracy but moral imperative.

“The Parkland students and so many other young people across the country who have experienced gun violence are carrying forward the history of the American journey,” he said on Sunday.

“It is a history written by young people in each generation who challenged prevailing dogma to demand a simple truth: we can do better. And we will.”