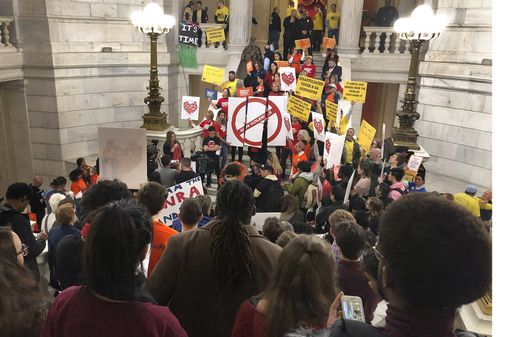 Four shootings in four days have rattled Rhode Island. Police have seized twice as many illegal firearms so far this week as they did last year.

There, Huntley said the last several days have “just not been normal.”

“We’ve been working around the clock to help those victims, those families that have been hurt by violence,” said Huntley. “There’s no words for what we see.”

Senators Jack Reed and Sheldon Whitehouse, and US Congressmen David Cicilline and Jim Langevin, had previously announced they would be “seeking to deliver federal resources” and take legislative action to help prevent gun violence. They have talked about expanding access to mentoring programs to keep young people out of criminal involvement, which would include “targeted investments” in social and economic programs for disadvantaged neighborhoods. But on Monday they did not specify how those resources would be allocated, or when.

Whitehouse said he is co-sponsoring 14 different measures related to gun violence in Congress, but that they “aren’t going anywhere” because of the lobbying pressures by the National Rifle Association. He said while guns have “always been in Rhode Island,” the number of guns is increasing.

Huntley told a Globe reporter that passing gun control is “only a piece” of addressing the systemic issues many in Providence, and other parts of Rhode Island, currently face. He said the state needs to address education reform, specifically in Providence, and offer nonviolence and preventative training to all, not just those who are already doing the work.

He said he would need serious investment — about $5 million annually — compared to the “shoestring budget” the nonprofit has been working off of for the last 20 years to further make an impact across the state.

Garlington, who lost her 21-year-old daughter to a drive-by shooting several years ago, she said she is numb from the recent events as it brings back memories of losing her own child. She said it’s time to pass gun control and to stop using the Second Amendment as a talking point and an excuse.

“Some of the bills have been re-introduced year after year. Rhode Island should not have made the news nationally for a mass shooting,” she said. “We should be making the news for common sense gun laws.”

Also on Monday, the Rhode Island Coalition Against Gun Violence called on the House and Senate Judiciary Committees to immediately pass the package of gun reform bills currently before them out of committee for a vote on the floor.

One of the weapons police seized this past weekend was a Springfield Armory XD40 semi-automatic pistol with one live cartridge in the chamber and eleven live cartridges in the magazine.

“Police will continue to seize weapons but unfortunately, more guns will make their way onto the streets in large part because state legislators have refused to take step that would step the tide of deadly weapons into our cities,” said a statement from the Coalition executive director Linda Finn Monday. “The semi-automatic weapons with high-capacity magazines that are currently wreaking havoc on our neighborhoods are still available for easy, legal purchase in Rhode Island, despite being prohibited in our neighboring states of Massachusetts, Connecticut, and New York.”

Neronha said “focused enforcement” is needed. But beyond legislation and getting criminal activity off the streets, he said it’s important to “make life meaningful for young people” after school.

Elorza echoed the attorney general’s comments about young people, saying that preventing gun violence goes beyond legislation. There is a need to connect young people to mentorship programs, workforce training and summer jobs, and deescalation and nonviolence training for everyone— not just those already doing the work.

“But there are too many young people that have lost hope,” said Elorza. “Yes, we need to take guns off the streets… But if we really want to solve and cure violence, it takes so much more than that. We have to ask ourselves, why are kids losing hope?”