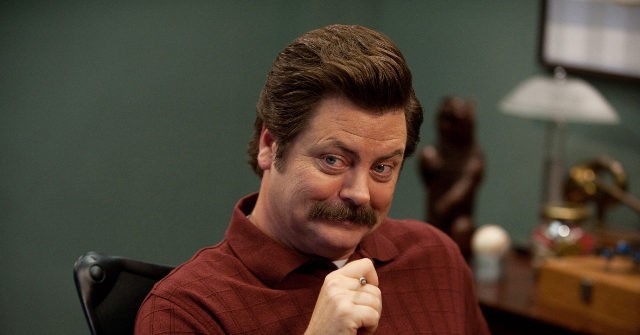 Actor Nick Offerman, who helped fundraise for Democrats ahead of the 2020 election, is expected to appear before the House Energy and Commerce Committee on Wednesday to encourage Americans to get vaccinated against the Chinese coronavirus. The star of NBC’s hit sitcom Parks and Recreation will testify before the Subcommittee on Oversight and Investigations for its hearing, titled, “A Shot at Normalcy: Building COVID-19 Vaccine Confidence.”

The Energy and Commerce Committee confirmed Offerman’s upcoming appearance in a tweet on Friday — which included a GIF of the actor — in response to a tweet by Politico’s Playbook reporting that he will “urge Americans (particularly Republican men) to get vaccinated.”

You can watch the hearing on #COVID19 vaccine confidence here: https://t.co/jDQKftFHZD

In September, Offerman teamed up with his fellow Parks and Recreation cast members for a virtual town hall fundraiser to expand the war chest of Wisconsin’s Democrat Party ahead of the 2020 presidential election.

In 2018, the actor blamed “close-minded NRA fanatics” for refusing to give gun control a chance, after they didn’t go along with the numerous Second Amendment restrictions proposed by Michael Bloomberg-funded Everytown for Gun Safety.

“Microsoft created an AI Twitter user, and within 24 hours it had become virulently racist and sexist,” he said. “Now it’s the Republican nominee for president.”

In Their Own Words: Schultz, Stauber offer their views on mining, guns, energy, police – Duluth News Tribune
‘She Doesn’t Tell Us the Truth’
When You’re Not Looking – 27 East
Biden to stay ‘laser focused’ on legislative accomplishments amid Trump investigations
White House gears up to promote Joe Biden’s wins during August lull in Washington