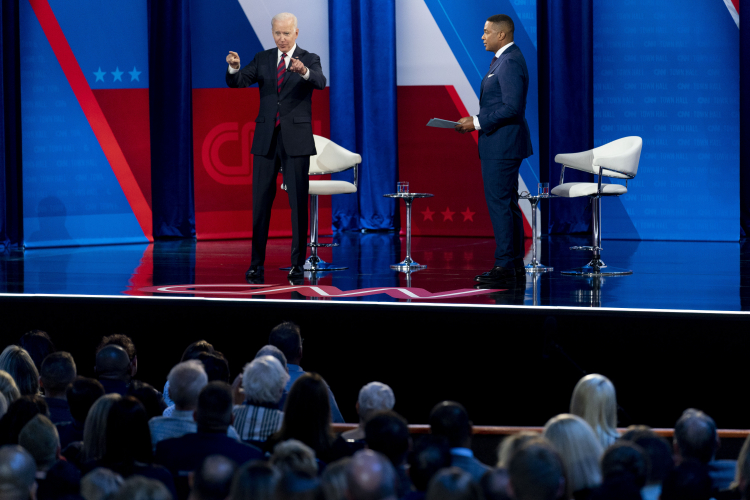 If there was any doubt that President Biden wants to ban the vast majority of guns in the United States, he again clarified his position last week. “The idea you need a weapon that can have the ability to fire 20, 30, 40, 50, 120 shots from that weapon — whether it’s a — whether it’s a 9-millimeter pistol or whether it’s a rifle — is ridiculous,” Biden said at a televised CNN townhall meeting. “I’m continuing to push to eliminate the sale of those things, but I’m not likely to get that done in the near term.”

The president’s gun control proposals will make guns so expensive and difficult to obtain that only the extremely wealthy will be able to afford to own one legally. While the news media assures Americans that Biden just wants “reasonable” regulations, Biden made the scope of his true ambitions clear during the campaign. At a high-dollar private fundraiser in Seattle in 2019 he said: “Why should we allow people to have military-style weapons, including pistols with 9-mm bullets and can hold 10 or more rounds?”

When Republicans pointed out that this goal was tantamount to banning most modern handguns, liberal  PolitiFact quickly came to Biden’s defense.  The fact-checking site did so again last week. “The most popular handguns would face no restrictions under Biden’s policies,” wrote PolitiFact senior correspondent Jon Greenberg. The basis of this conclusion, Greenberg wrote, is that the popular Sig Sauer P365 cannot accommodate more than 10 or 15 rounds. This is untrue. Although that is how the pistol comes from the manufacturer, this gun and virtually all semiautomatics can use bullet magazines that extend well below the pistol grip. The model Greenberg referenced can actually use magazines that hold 20, 30, or even 50 rounds.

Presumably, PolitiFact believes that Biden’s proposed ban would only apply to guns based on their “standard magazine” size. But Biden himself wasn’t ambiguous. He talked about banning pistols based on their “ability to fire” or that “can hold” so many rounds. When he mentions “military-style weapons including pistols,” the president is talking about the gun themselves. He also wants to ban so-called “assault rifles” regardless of how many rounds their standard magazines hold, and he lumps those guns together with pistols. Over 85% of handguns in the U.S. are semiautomatics and would be banned if Biden has his way.

The nation’s top elected Democrats do not usually openly talk about banning handguns, but their proposals aim to accomplish just that.  Biden has also proposed making gun manufacturers civilly liable for any misuse of firearms that they sell. That means people could sue manufacturers and sellers whenever a crime, accident, or suicide occurs with a gun – and would effectively put them out of business.

Normally, in such “product liability” litigation, a manufacturer must produce a defective product or violate the law in some way. But to run afoul of this proposed statute, gun makers need not do anything wrong at all.

Imagine what would happen to the car industry if similar rules applied. The National Safety Council estimates that car accidents in 2018 caused 39,404 deaths and 4.5 million injuries in the United States. Most of these occur because a driver isn’t paying attention or drives recklessly, perhaps under the influence of drugs or alcohol, neglected to maintain the vehicle – or because of some other combination of factors. Rarely is the car or truck itself at fault. It would be ludicrous to make automakers pay lost wages, medical costs, and pain and suffering because of a driver’s negligence. Gun manufacturers likewise shouldn’t have to pay for the misconduct of America’s citizens.

Democrats’ unwillingness to fix the gun background check system also reflects their desire to make life difficult for gun owners. Errors in the system stop about 3.8 million law-abiding Americans from purchasing firearms. Mistakes arise because most checks look at  phonetically similar names and similar birthdates and account for about 99% of the denials. When I recently worked in the U.S. Department of Justice, I saw data showing that the system overwhelmingly discriminates against black and Hispanic males. All the government must do is hold itself to the same standards for background checks that private companies have to meet.

Or take Biden’s “zero tolerance” policy towards what he calls “rogue” gun dealers. No policymaker wants dealers to secretly sell guns to criminals out of the back of their store. But that is not what Biden is going after. Even one mistake in paperwork, no matter how trivial and inconsequential, now means the loss of their license and the end of their business. When Biden talks about 5% of the gun dealers selling 90% of the guns found at crime scenes, he ignores that 5% sell over 90% of the guns. He ignores that less than 0.1% of guns are used in a crime in any given year, and that guns are used to stop crime about five times more frequently than they are used to commit it.

Semiautomatic guns account for the vast majority of gun sales, and provide critical self-defensive benefits for individuals. If manually loaded, single-shot guns are the alternative, law-abiding victims are going to be in trouble if they have to fire more than one round in self-defense against a criminal with an illegally obtained semiautomatic.

Magazines, which are a box with a spring, are easy to make and virtually impossible to stop criminals from obtaining. Let’s not put law-abiding citizens at such a disadvantage by giving them only one shot while criminals may have dozens.

Lott is the president of the Crime Prevention Research Center and the author most recently of “Gun Control Myths.” Until last month, Lott was the senior adviser for research and statistics at the U.S. Department of Justice’s Office of Legal Policy.