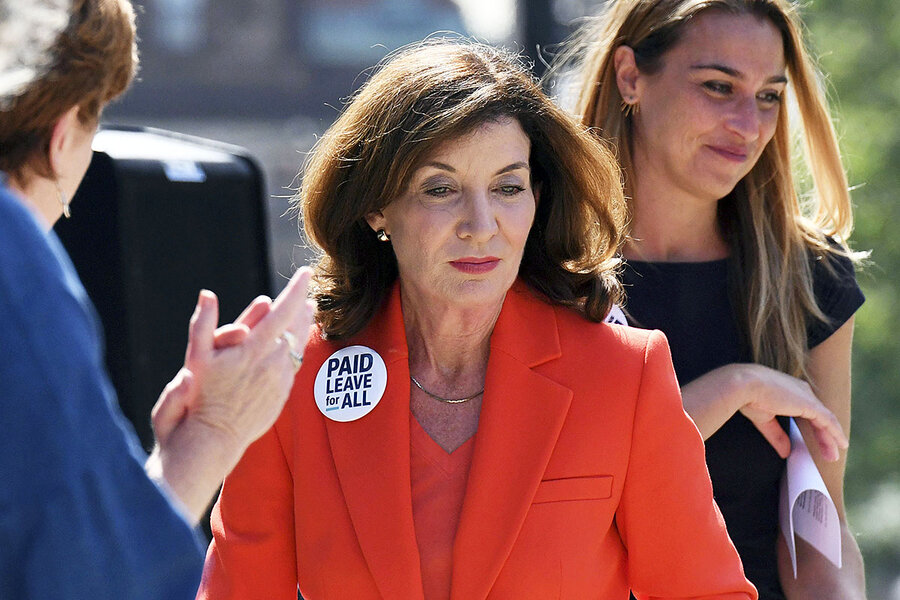 New York Lt. Gov. Kathy Hochul has described the “aha moment” when she decided to run for politics. She saw that a young man without any apparent experience was running for the town board. “What does he have that I don’t have other than confidence?” she later told The Journal News. She entered the race and won.

Now she could become the first female governor of New York, part of a recent wave of firsts in which women have reached the upper rungs of politics in one of the country’s largest and most influential states.

Whether Andrew Cuomo is forced from power, the governor known for his bare-knuckle brand of politics may be among the last of the “three men in a room” version of New York state leadership.

After a report from the state attorney general this week found that Andrew Cuomo sexually harassed 11 women, the Democratic governor has been repudiated by his own party. Democrats from President Joe Biden on down called for him to resign, and the state Assembly began expediting impeachment proceedings.

“There really has been a huge generational shift from the time when it was ‘three men in a room,’” says Ken Sherrill, professor emeritus of political science at Hunter College. “The political leadership of New York has become much more reflective of the population of the state, and particularly of the Democratic Party, over the past few years.”

When Lt. Gov. Kathy Hochul first found her passion for politics as a young woman in the northern reaches of New York, she didn’t necessarily see herself running for public office.

In high school in the mid-1970s, she’d take the bus to downtown Buffalo to volunteer for the local Democratic Party headquarters – where she was often the only woman in the room. During her years at Syracuse University, she served as an intern at the New York State Assembly. Later, after graduating from law school, she served as a legal aide to an upstate U.S. congressman and then New York’s legendary U.S. senator, Daniel Patrick Moynihan.

“I always wanted to be the brains behind other people,” she told The Journal News in 2018, when she was running for a second term as lieutenant governor on the ticket that included Gov. Andrew Cuomo.

Whether Andrew Cuomo is forced from power, the governor known for his bare-knuckle brand of politics may be among the last of the “three men in a room” version of New York state leadership.

Back then she simply lacked the confidence to run for public office, Ms. Hochul said. “It’s something that women of my generation and some of other generations still experience. I didn’t have any role models. We were just women behind the scenes making the guys look good.”

Today, however, New York’s lieutenant governor could become the first woman to hold the office of governor of New York, part of a recent wave of firsts in which women have reached the upper rungs of politics in one of the largest and most influential states in the country.

After a report from the state attorney general this week found that Mr. Cuomo sexually harassed 11 women and intimidated his accusers, the governor has been repudiated by his own party. Democrats from President Joe Biden and House Speaker Nancy Pelosi to Eric Adams, the Democratic pick to be New York’s next mayor, called for him to resign. After he refused, the state Assembly began expediting impeachment proceedings against him. On Friday, one of the women filed a criminal complaint against Mr. Cuomo with the Albany County Sheriff’s Office.

Whether he is forced from power, the governor long known for his bare knuckle and imperious brand of politics may be among the last of the “three men in a room” version of New York state governance – an expression once used to describe the decisive power held by the state’s governor, Assembly speaker, and Senate majority leader.

Indeed, while Lieutenant Governor Hochul would make history in the Empire State should she need to serve the remainder of the embattled governor’s term, in 2018 Democratic Assemblywoman Crystal Peoples-Stokes became the first woman to serve as that body’s majority leader, second to the speaker. And in 2019, Democratic Sen. Andrea Stewart-Cousins became the first to serve as the Senate majority leader, one of the most politically powerful posts in New York.

New York Gov. Andrew Cuomo, shown during a news conference May 10, 2021, is facing impeachment proceedings after a report found he sexually harassed 11 women and retaliated against an accuser. He denies the allegations and has refused to resign.

“There really has been a huge generational shift from the time when it was ‘three men in a room,’” says Ken Sherrill, professor emeritus of political science at Hunter College in Manhattan. “The political leadership of New York has become much more reflective of the population of the state, and particularly of the Democratic Party, over the past few years.”

A breakthrough of firsts

New York Attorney General Letitia James, whose report this week revealed detailed and corroborated allegations of sexual harassment, also became the first woman elected to the office in 2018 – and the first woman of color to win any statewide office in New York. Her immediate predecessor, Barbara Underwood, the first woman to hold the office, was appointed by Governor Cuomo to serve out the last few months of the term of Eric Schneiderman, who resigned in 2018 after four women alleged he sexually abused them.

This breakthrough of firsts coincided with the height of the #MeToo movement, which political experts say contributed to the many factors that brought these women to power. Their elevation upholds the kinds of role models that didn’t exist when Ms. Hochul began her career.

In her role as a legal aide for Sen. Moynihan in the mid-1980s, she was his point person during the last major immigration reform bill and other policy initiatives. In many ways she relished being the brains behind the scenes, despite being a new mother at the time.

“I loved my job, but the hours were crazy,” Ms. Hochul told the local news outlet CITY this year. “We literally pulled all-nighters when they were in session. You have a child – there’s nobody to watch the kids.”

So she moved back to the Buffalo area in the early 1990s with her husband, Bill Hochul, who President Barack Obama would appoint as the U.S. attorney for the Western District of New York. They had a second child in the small town of Hamburg.

But she soon felt herself drawn back to politics, engaging in local quality-of-life issues and attending town board meetings. And it was then that she had an “aha moment,” she told The Journal News.

“What really pushed me over the top was I was 35, I had been an attorney, worked on Capitol Hill, helped small businesses, was a mother, a taxpayer, a homeowner, and I still didn’t think I had enough qualifications to run for the most local form of government – the Town Board,” she said.

But then a 22-year-old man who had just graduated and was living with his parents ran for the town board. “That was the ‘aha moment.’ What does he have that I don’t have other than confidence? I decided to run,” she said.

Ms. Hochul won a seat in 1994 and served until 2007, when she was first appointed and then elected as Erie County clerk. It was here that she started to garner statewide attention after vocally opposing a proposal by then-Gov. Eliot Spitzer to permit unauthorized immigrants to apply for driver’s licenses – becoming known as a moderate, if not conservative, upstate Democrat.

In 2011, Ms. Hochul won a special congressional election in a conservative upstate district, receiving an endorsement from the National Rifle Association. After the lines of her district were redrawn to make it even more conservative, however, she lost her bid for reelection.

“She was a right-of-center candidate in a far-right-of-center district,” former Rep. Steve Israel, who chaired the Democratic Congressional Campaign Committee, told The New York Times earlier this year. “She presented as an independent, not willing to toe the party line, but she also had a way of connecting with progressive voters on fundamental issues like choice and the environment.”

After his first running mate decided not to run again for health reasons, Governor Cuomo tapped the upstate moderate.

Like the U.S. vice presidency, there is little power and no defined role for the office she’s held since 2014. But Professor Sherrill notes Lieutenant Governor Hochul has been crisscrossing the state for years, attending events and making connections as she faithfully promoted state tourism and a number of Governor Cuomo’s initiatives, directing his “Enough is Enough” campaign against sexual assault on college campuses.

“Cuomo gave her no real responsibility – he’s never been interested in sharing power with anybody – but she’s a skilled, savvy politician who thrived in the tough politics of Buffalo, a kind of Clinton Democrat,” Professor Sherrill says.

“I believe these brave women”

Lieutenant Governor Hochul joined a near unanimous chorus of state and federal officials urging Mr. Cuomo to resign – even as the state’s Assembly begins to prepare articles of impeachment and the Senate a possible trial.

Although she could make history as the first woman to hold the office of New York governor, political observers say her moderate record could prove a difficult sell in next year’s Democratic primary in which progressives are likely to extend their influence.

“The 2022 election is now shaping up as a very, very interesting one,” says Professor Sherrill. “[Democratic Sen. Kirsten] Gillibrand is up for reelection, the governor’s office is up, and there will be reapportionment next year, so everybody will all be running in new district lines.”

“But Cuomo will hover over all of this, no matter what happens,” he continues, “especially for the lieutenant governor.”