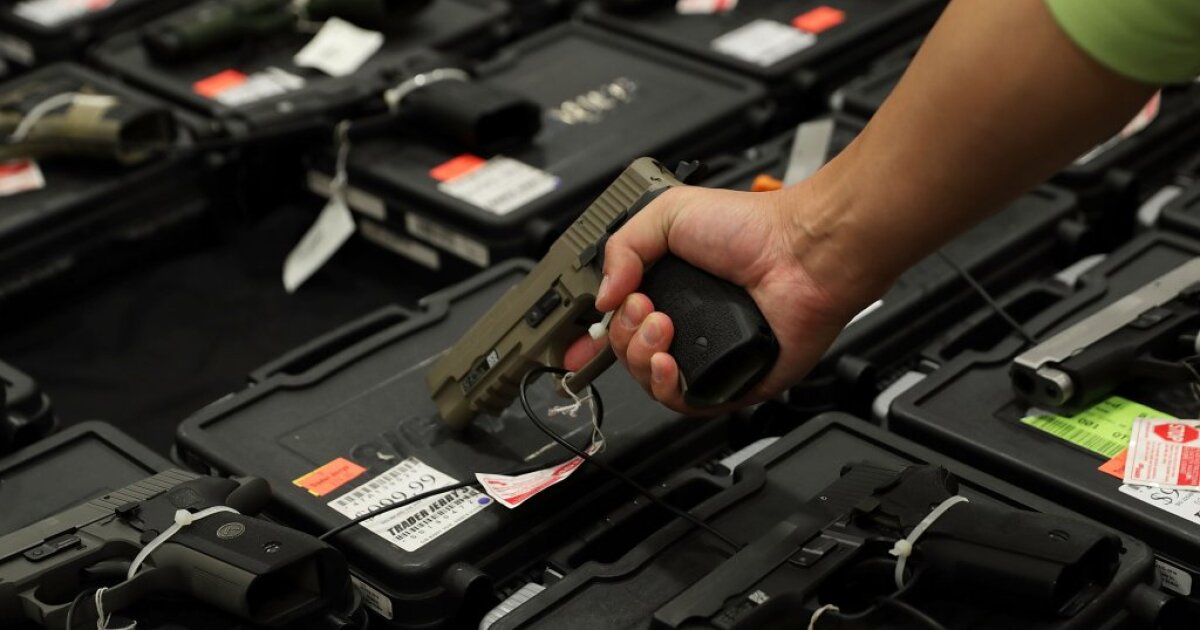 Gov. Chris Sununu vetoed two bills that would have ended the state’s Gun Line Tuesday, halting a proposal by some gun rights advocates to send all firearm background check requests to the FBI.

This story was originally published in New Hampshire Bulletin.

In a long-awaited decision, Sununu struck down Senate Bill 141 and House Bill 334, two bills that would have made broad changes for how handgun background checks are run.

Stay In The Know: Sign up for NHPR’s Rundown newsletter.

“As Governor, my record is very clear – I have consistently defended the 2nd amendment rights of New Hampshire’s citizens and I remain committed to doing so,” Sununu wrote in his veto message of SB 141. But, he added, the bill “would create substantial unintended negative consequences by ceding control of our state process to the federal government.”

Since 1993, New Hampshire has had a state-run system called the “Gun Line” to help oversee purchases of handguns in the state. While all firearms buyers must submit to a federal background check with the National Instant Criminal Background Check System (NICS), buyers of handguns must enter an additional step.

Rather than contact the federal system directly, sellers of handguns call the Gun Line, a unit of the state’s Department of Safety, which then reaches out to NICS to look into the buyer on its own. The Gun Line allows State Police officers and staff to more closely examine a New Hampshire-based request to purchase a handgun by double-checking to see whether the person is prohibited from purchasing a firearm because of a domestic violence order or other court decree.

Supporters of the Gun Line, including the New Hampshire Coalition Against Domestic and Sexual Violence, say the additional verification step for handguns allows state officials to better scrutinize the NICS records, which can sometimes be inaccurate. That review helps catch those who should be denied a handgun but have not yet made it into the NICS database, but it also helps greenlight a buyer who has the same name as someone who is prohibited.

But some firearm rights supporters say the state-run system is inefficient and unnecessary, pointing to times when the Gun Line has reportedly taken weeks and even months to clear a person’s handgun purchase. Those delays worsened during the early months of the pandemic, critics say. Abolishing New Hampshire’s state-run system and deferring to the FBI NICS system for all purchases would solve those delays, supporters of the legislation said, and any inaccuracies with the federal system could be fixed by the state court system.

The debate pitted gun advocates against each other, with the National Rifle Association and Gun Owners of America urging elimination of the Gun Line, and others, such as the New Hampshire Firearms Coalition and Republican Executive Councilor David Wheeler, pressing Sununu to keep the system in place. Amid dual lobbying efforts, Sununu declined to give his position on the bill when asked by reporters about it in June.

In his veto messages, the governor called the bills “no longer necessary,” pointing to efforts made by the Department of Safety in the past year to reduce the wait times with the Gun Line by adding more staff. Those changes came in response to complaints from the firearms supporters.

“This bill, which was introduced to solve a problem caused by the COVID-19 pandemic, is no longer necessary,” Sununu said. “New Hampshire has taken steps to improve technology, processes, and staffing in order to address this issue without legislation.”

One of the two bills, HB 334, contained an unrelated provision that would establish a right to carry a firearm on off-highway recreational vehicles and snowmobiles. In vetoing that bill, Sununu stressed that he supported the OHRV proposal but had to veto the whole bill because of the Gun Line provisions.

Some advocates for the veto thanked Sununu for his decision Tuesday.

“We applaud Gov. Sununu for vetoing SB 141 and HB 334,” the Coalition Against Domestic and Sexual Violence said in a statement. “We are grateful that our background check system will remain strong and responsive to protect victims of crime in New Hampshire.”

Wheeler, who had quietly been lobbying Sununu to veto the bills as well, came out with his own statement praising the move Tuesday.

“Gov. Sununu made the correct decision today, when he vetoed SB 141 and HB 334,” Wheeler said. “… The veto is in the best interest of New Hampshire firearms owners; it keeps the instant check in the hands of local officials who are accountable to the people of New Hampshire.”

Firearm rights groups that advocated for the bill did not immediately comment Tuesday.

Separately on Tuesday, Sununu vetoed House Bill 239, which attempted to extend the statute of limitations around the physical assault of minors, allowing victims to press charges up to six years following their 18th birthday. But in a letter sent to the governor’s office, New Hampshire’s 10 county attorneys and the state’s attorney general pointed to a fundamental flaw.

The language as written, the attorneys wrote, did not specify that the limits only applied to juvenile victims; the effect would be that any adult assaulted could not press charges if they were more than six years past their 18th birthday – or 24 years old.

“Occasionally, well-intentioned legislation can fall apart because of a few misplaced words or technical language that was left out,” Sununu said in the veto message, urging lawmakers to fix the language and pass the bill again.

The vetoed bills will come before the Republican-led Legislature in September for “Veto Day,” at which point the House and Senate will take up votes on whether to override the governor’s decision and pass the bills.