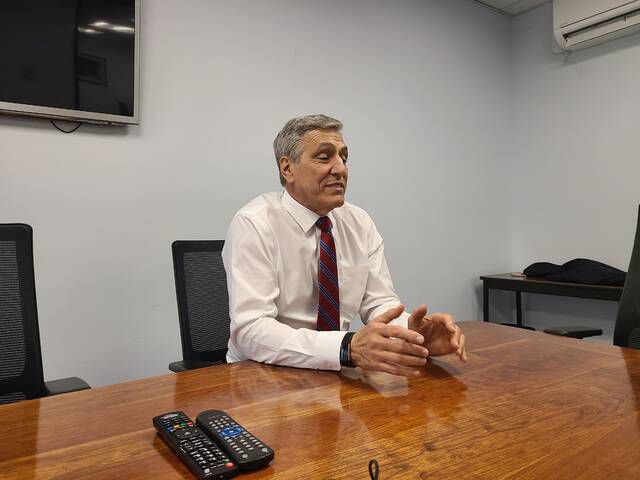 WILKES-BARRE — Lou Barletta said his experience in the Hazleton mayor’s office and his familiarity with voters across the state make him the favorite in the race to become Pennsylvania’s next governor.

Barletta, R-Hazleton, visited the Times Leader on Thursday to discuss the issues that are on the minds of voters. He said he has crisscrossed the state, talking and listening to voters to find out what they want to see from their governor.

“People know me,” Barletta said. “And I have a proven record as a mayor and a member of Congress.”

“When I was mayor of Hazleton, I stood up for people,” Barletta said, repeating his statement that “illegal is illegal” regarding the doubling of the city’s population, while revenues remained the same and increased services were needed. “I fought against illegal immigration and even though we lost in court, our battle enabled other states like Arizona and Alaska to be victorious in federal court. We had no choice in Hazleton, we had to do something.”

Barletta said Pennsylvanians need someone to stand up for them. He said energy, specifically the natural gas industry, could make the state a world leader.

“We could be exporting our energy instead of relying on Russia,” he said. “We will build gas lines. Pennsylvania needs to be business-friendly.”

Barletta said his experience as a business owner with his wife, Mary Grace, also gave him the necessary background to lead Pennsylvania to an economic turnaround.

“All my experience is what set me apart from the other candidates,” Barletta said. “I have experience in governing.”

Barletta said he is “road-tested and ready” to be the next governor. He said the high gas prices affect all businesses and taxpayers.

“The only thing not delivered by a truck is a baby,” he said. “We have to become energy independent. “We are too reliant on other countries for our energy. The world could depend on us.”

On education, Barletta said parents need to be directly involved in their children’s education. He said parents should be able to see curriculum offering and lesson plans. He said Critical Race Theory should not be taught in schools.

Barletta, father of four daughters, has 10 grandchildren. He said he has great concern for what is taught in schools. He also opposes “biological males” competing in athletics with females.

Barletta said Luzerne County would be best served by a governor from Luzerne County. He said he will preserve the environment, he supports Second Amendment rights and he will always fight for veterans’ rights.

“Any veteran who served in places like Afghanistan will never have to sleep under a bridge here,” he said.

Barletta opposes mail-in balloting, saying the risk of fraud is too high. He said absentee ballots are efficient.

“We need to restore faith in our elections,” he said. “Mail-in balloting took that away.”

Barletta served as mayor of Hazleton from 2000 to 2010 when he was elected to Congress, where he served until 2019.

Barletta said he will undo the economic damage caused by Gov. Tom Wolf’s “disastrous response to the coronavirus epidemic,” which he said included crushing small businesses with shutdowns, killing thousands of jobs, sending COVID-positive patients into nursing homes, and botching the vaccine roll-out.

Barletta said Pennsylvania sits atop a massive expanse of natural resources which has always been a key driver of the economy. Barletta said he will be a champion of the production of coal, oil, and natural gas.

As former mayor of Hazleton, Barletta said he knows that our local and state law enforcement officers are the greatest assets our communities have to offer. He will always honor and support the men and women in blue who put their lives on the line to protect their neighbors. He will also strongly support firefighters and first responders, who also give of themselves to protect and defend their communities.

Barletta said Pennsylvanians have the inherent right to keep and bear arms. He said he will never cease protecting that right. As a Congressman, Barletta received an “A” rating from the National Rifle Association and championed the Concealed Carry Reciprocity Act. As Governor, Barletta said he will always protect lawful gun owners from government bureaucrats who seek to dismantle our constitutionally protected Second Amendment rights.

Barletta said he is a protector of the unborn. Each year that Barletta served as Congressman, he earned a 100% rating by the National Right to Life Committee. In 2018, Lou Barletta was endorsed by the Pennsylvania Pro-Life Federation.

Seeking their parties’ nominations are:

• Josh Shapiro is the only Democrat in the race.