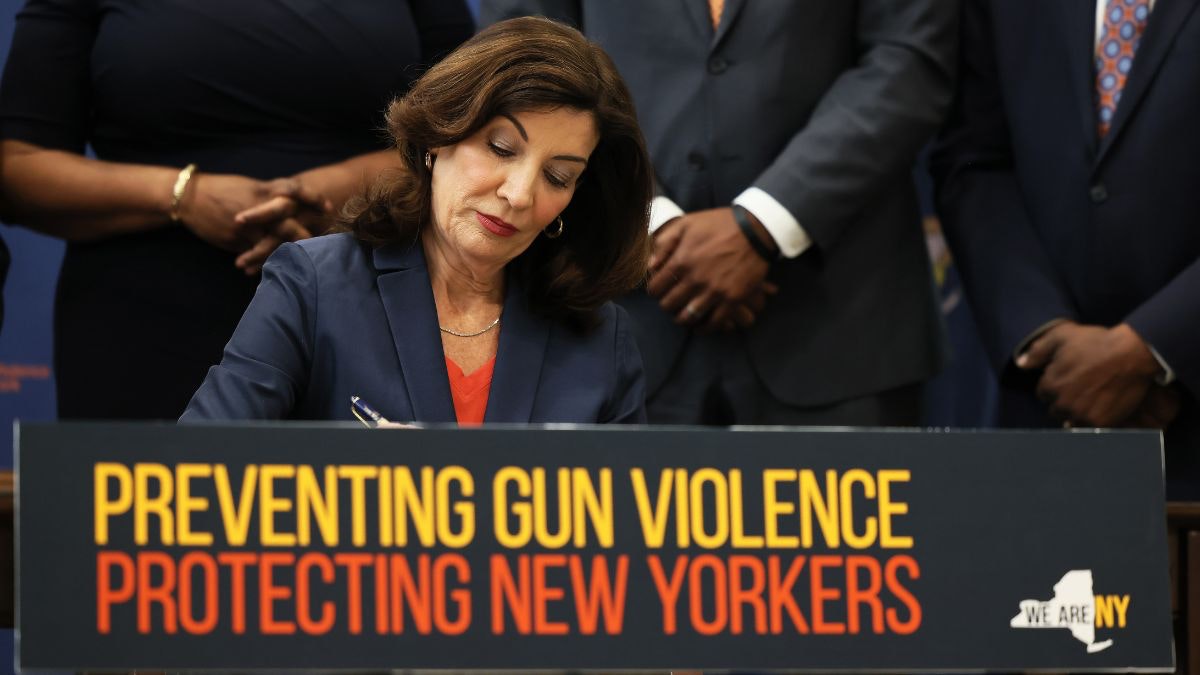 “Gun violence is an epidemic that is tearing our country apart. Thoughts and prayers won’t fix this, but taking strong action will,” Hochul said in a statement.

“In New York, we’re taking bold steps to protect the people of our state. I am proud to sign a comprehensive bill package that prohibits the sale of semiautomatic weapons to people under 21, bans body armor sales outside of people in select professions, closes critical gun law loopholes and strengthens our Red Flag Law to keep guns away from dangerous people—new measures that I believe will save lives,” she added.

“While we are taking expedient action to enhance New York State’s nation-leading gun laws, we recognize that gun violence is a nationwide problem. I once again urge Congress to follow our lead and take immediate action to pass meaningful gun violence prevention measures. Lives depend on it,” Hochul stated.

“There is a scourge of gun violence in our country due to the pervasiveness of illegal firearms. Year after year, our neighborhoods are flooded with illegal guns and ghost guns, tormenting families and law-abiding citizens every day, but yet the national response does not change,” Delgado said.

“In New York, we just passed common-sense gun safety legislation and more kids will live to see their high school graduation because of it. In the fight to save lives, New York is leading the way,” he added.

“For our neighbors in Buffalo and across the country, we cannot grow complacent, we cannot grow numb and we cannot tolerate inaction on common sense gun reform any longer,” she tweeted. “The 10 bills I signed into law today are the start of our work to stop these tragedies — not the end.”

The 10 bills I signed into law today are the start of our work to stop these tragedies — not the end. pic.twitter.com/awokEF8Ec3

Not everyone agrees with the new gun legislation. The decision to raise the minimum age of gun purchases of semiautomatic rifles from 18 to 21 is likely to face legal challenges from those who see the move as infringing on Second Amendment rights.

“While exploiting tragedy to pass their gun ban agenda, they have completely turned their backs on New Yorkers. They have left thriving cities to decay. Even more incredible, there is not one, single school safety bill in the mix. That is disgraceful!” the National Rifle Association said in a statement last week ahead of Hochul signing the package of gun laws.