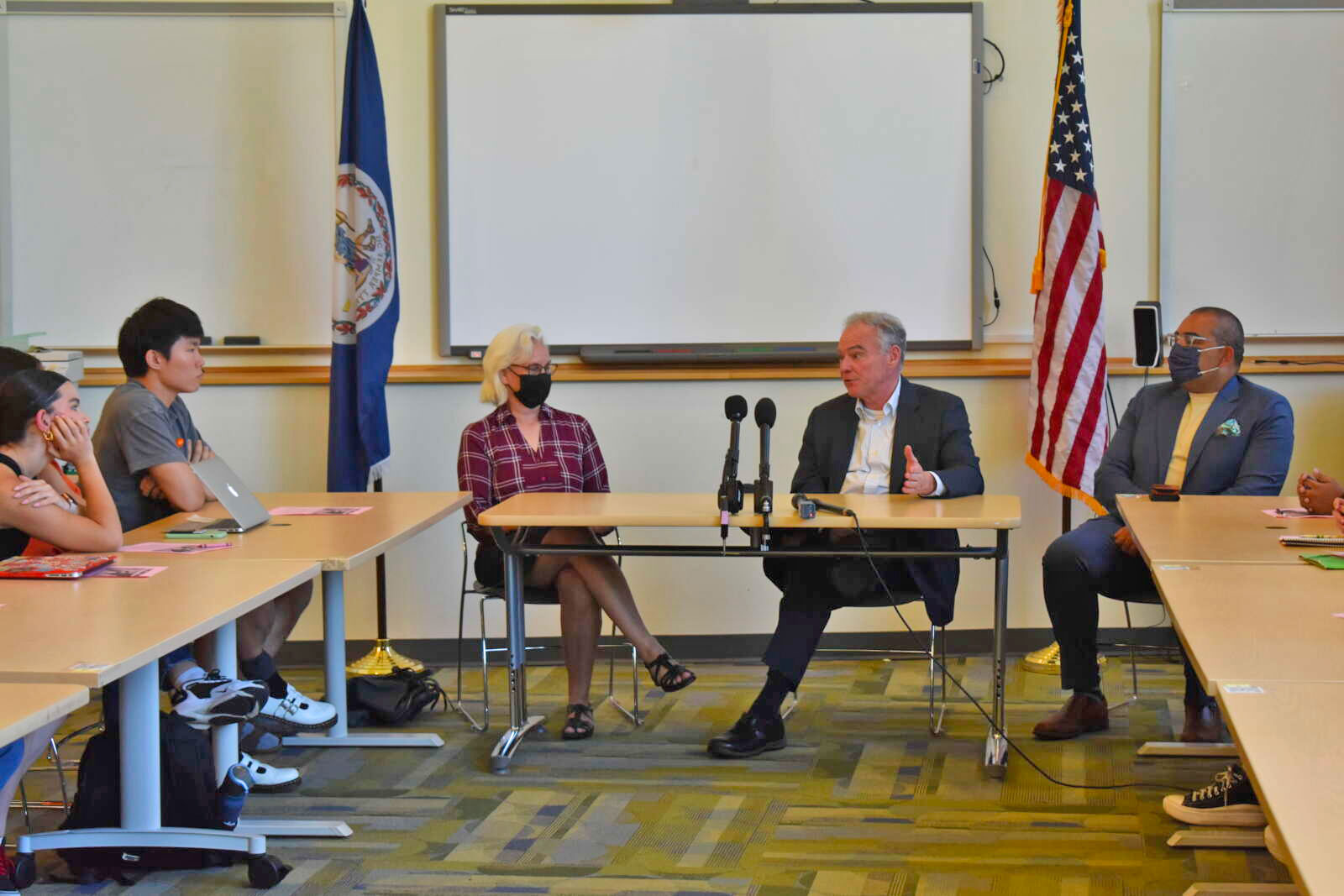 Only days before graduation, Wakefield High School students questioned Virginia Sen. Tim Kaine (D) about what can be done to pass gun legislation in Congress

Kaine paid a visit to Wakefield on Monday afternoon, in the wake of another school shooting, to speak with students about gun violence and increasing safety in their classrooms. He was joined in the school’s library by about 30 students as well as Arlington School Board Chair Barbara Kanninen and Arlington Public Schools Superintendent Francisco Durán.

It was four years ago when Kaine came to Wakefield to talk about the same thing.

After speaking for about 15 minutes, the Virginia senator took questions from the students — many of whom were seniors and only about ten days from graduation. The students questioned the senator about Congress’s inaction, filibustering, bans on assault rifles, and the specific impact gun violence has on communities of color.

“Why are we having the same conversations over and over again?” asked one student.

“Assault rifles are often used in shootings and their purpose is to kill as many people as possible. So, what work has been done [in banning them]?” questioned another.

“What can we do to stop this endless cycle? We protest… and nothing happens,” another student asked, clearly emotional.

Kaine listened and answered each one, expressing optimism that at least some legislation might be passed in the coming weeks that could expand background checks and red flag laws. However, he agreed with the skepticism of some of the students.

Kaine brought a number of times the 2007 Virginia Tech shooting that happened when he was governor. It was as an event, he said, that “scared” him and made him realize the needed urgency for gun control laws.

He also frequently touted the “Virginia Plan to Reduce Gun Violence Act,” a measure that he and fellow Virginia Sen. Mark Warner introduced last year. It’s based on a series of state bills in Virginia which were signed into law in 2020, calling for universal background checks, a 30-day wait period between handgun purchases, and prohibiting those with protective orders from possessing a firearm. Notably, though, the bills didn’t ban assault weapons or high capacity magazines.

Kaine also called using the Second Amendment as reasoning for not expanding background checks, enforcing wait periods, and limiting the size of magazines as a “poppycock argument.”

“You can’t take away completely people’s right to bear arms, but you can impose reasonable regulations,” he said.

Kaine also blamed the National Rifle Association, which has its headquarters in Fairfax, for holding too much political power and having a financial interest “in flooding our streets with guns.”

Later, while speaking to the media, Kaine said that he believes this is the best opportunity to pass meaningful gun legislation since April 2013, four months after the massacre at Sandy Hook Elementary School. He cautioned, however, that there’s a window of about three weeks to do it since Congress goes on recess at the end of the month.

While students said they appreciated the senator’s visit, some remained skeptical that substantive change was on the horizon.

“There was the Parkland shooting, the one just now in Texas, multiple [in between], and nothing happens,” senior Leule Ashenafi told ARLnow. “Everyone just seems surprised, but it’s a cycle and keeps going around and around.”

He’s originally from the United Kingdom and, when he started going to school in the U.S., he was “alarmed” by the active shooting drills that takes in American schools. He says he can’t stop thinking about the massacre in Texas last month.

“It’s really scary,” he says. “These students went to school at the beginning of the day and expected to come home. What’s to say that it won’t be us next?”

Senior Niza Gonzalez, who’s originally from Venezuela, said she remembers her first active shooter drill in Arlington. She was in fifth grade.

“We had a lockdown, but I didn’t know what the word ‘drill’ meant. I thought there was actually an active shooter,” she said. “It was one of my first months as a fifth grader. That’s a vivid memory that I have.”

She appreciated Kaine’s “openness” but still felt like he was being a politician, attempting to strategize and get his message across instead of listening to what students were saying.

In recent months, Arlington has had its own share of threats of school violence.

In October, Washington-Liberty High School was locked down over a hoax claim about an active shooter.

When asked about these types of incidents, School Board Chair Kanninen said that she’s unsure if Arlington schools has had more violent threats than previous years. However, she does think those threats are getting more attention.

“Safety is our top priority… these incidents, by definition, are being dealt with. We have layers who are involved in different ways with any kind of student matters or any kind of matters of threats,” she said. “I think you all don’t necessarily hear the follow up. That’s frustrating to the community. But again, these things are ultimately student matters and they’re ultimately confidential. The end story, often, is not something that gets told.”