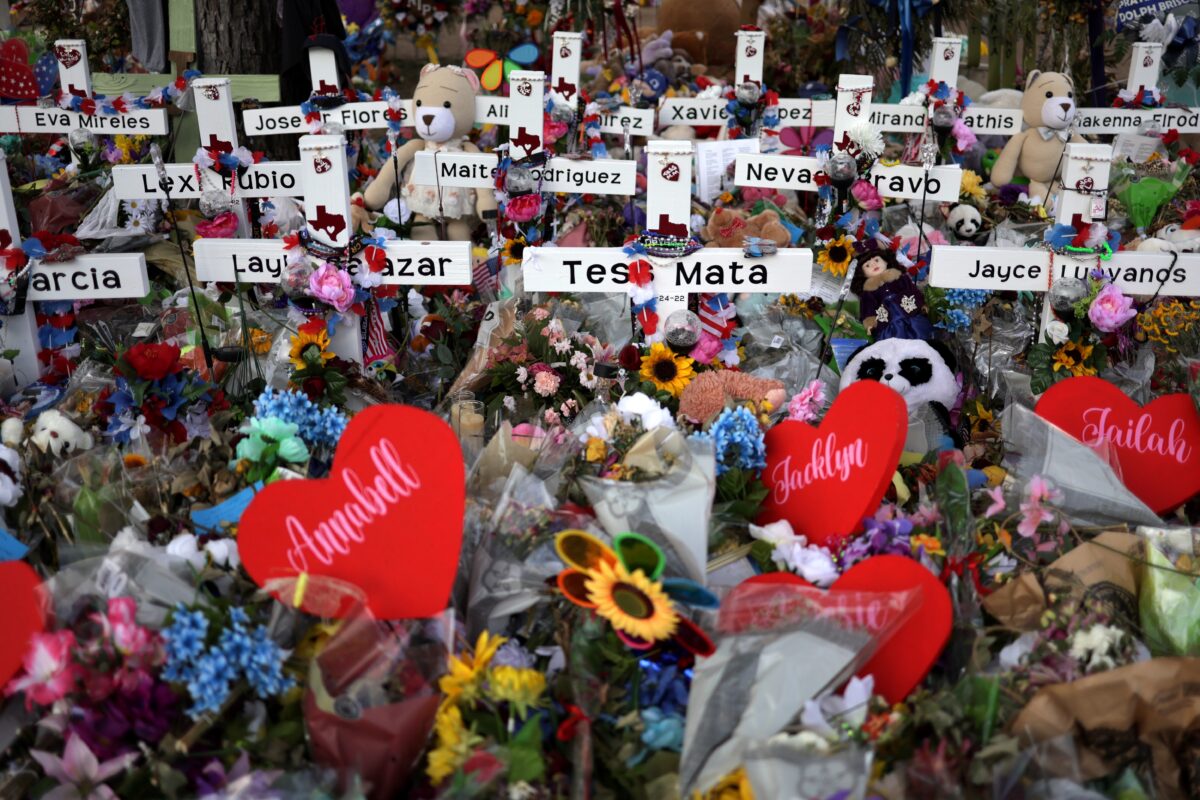 As Americans debate gun control measures following the mass shooting in Uvalde, Texas, some politicians are using the tragedy to advance their agenda against firearms.

One day after the shooting, Democrats began using the tragedy as a vehicle to push for the types of policies they were already wanting. That effort was evident when Senate Majority Leader Chuck Schumer (D-N.Y.) urged voters who want more strict gun control to vote for Democrats in the upcoming midterm elections.

Senate Democrats have failed to advance their wider-reaching federal gun control legislation for failing clear a 60-vote filibuster threshold, which is needed for bills to go to the floor for vote.

Also on May 25, Schumer blocked legislation, known as the Luke and Alex School Safety Act, that supporters say could help prevent school shootings. The bill would require the Department of Homeland Security to establish a federal clearinghouse on the best school safety practices. The bill was introduced by Sen. Ron Johnson (R-Wis.) and two of his Republican colleagues in January 2021.

“@SenSchumer blocked this common sense legislation in favor of his partisan agenda,” Johnson wrote on Twitter. In a separate tweet, he added “Dems aren’t looking for solutions, they want wedge issues that they hope will keep them in power. Sick.”

For former President Barak Obama, it seemed important for him to push his narratives surrounding racism than to condemn the Uvalde shooter.

“As we grieve the children of Uvalde today, we should take time to recognize that two years have passed since the murder of George Floyd under the knee of a police officer,” Obama wrote on Twitter.

Obama added: “In the aftermath of his murder, a new generation of activists rose up to channel their anguish into organized action, launching a movement to raise awareness of systemic racism and the need for criminal justice and police reform.”

On June 2, President Joe Biden, in a speech on gun control, declared that the second amendment “is not absolute.” The National Rifle Association (NRA), rebuked the president’s speech, saying that “All that the President repeatedly proposes will only infringe on the rights of those law-abiding who have never, and will never, commit a crime.”

However, history tells us that unarmed people can be defenseless if their governments turn against them. The most infamous example in history involves the Nazis, who used the weapons laws of the Weimar Republic to seize all the guns of the Jews, before starting to murder them in 1941, which marked the start of The Holocaust.

There are several other examples in history. Turkey, which established gun control in 1911, murdered 1.5 million Armenians from 1915 to 1917. The Soviet Union, after abolishing private gun ownership in 1929, killed 20 million citizens in the years since, until 1953.

Likewise, the Chinese people have also become a defenseless population under tight gun curbs imposed by the Chinese Communist Party (CCP), whose former leader Mao Zedong once famously said, “Political power grows out of the barrel of a gun.”

In the case of the Uvalde tragedy, school police chief, Pedro “Pete” Arredondo, has come under heavy scrutiny and heavy criticism for his decision to follow a barricaded subject protocol instead of the protocol for an active shooter—, thus delaying the police response by more than an hour. Steven McCraw, director of the Texas Department of Public Safety, has said that it was the “wrong decision” not to confront the shooter sooner.

Disarmament, nevertheless, is just one side of the equation—the side where the state seeks to impose a new social order by taking away people’s guns. The other side involves subverting a natural order that exists within all of us—namely morality—which manifests as self-restraint or self-control.

In the United States, the moral fabric of society is being destroyed, and people choose to act without morality—and for some, that means having no qualm in killing innocent school children.

Communist China serves as an alarming example of where Americans could end up in if our country continues to head down the current path. The CCP destroyed the moral foundations of its society by launching the Cultural Revolution from 1966 to 1976, during which traditional ideas, culture, habits, and customs were branded “the Four Olds” and were eliminated.

But even after taking away people’s guns and destroying traditional morality, the Chinese regime has discovered that it still has a problem: it can only maintain social stability to the extent that it can control people using the powers of the state. In other words, the communist regime can only control people to the degree in which it can monitor people.

Police can respond to incidents but they are reactive after a crime is committed. Typically it’s going to take the police 15 minutes or more to respond. So the next step is pre-emption.

But the types of technologies that you would have to have to pre-empt crime are things that we wouldn’t want to live with, involving the monitoring of citizens’ every action.

Views expressed in this article are the opinions of the author and do not necessarily reflect the views of The Epoch Times.

Joshua Philipp is an award-winning investigative reporter with The Epoch Times and host of EpochTV’s “Crossroads” program. He is a recognized expert on unrestricted warfare, asymmetrical hybrid warfare, subversion, and historical perspectives on today’s issues. His 10-plus years of research and investigations on the Chinese Communist Party, subversion, and related topics give him unique insight into the global threat and political landscape.

Frank Fang is a Taiwan-based journalist. He covers US, China, and Taiwan news. He holds a master’s degree in materials science from Tsinghua University in Taiwan.