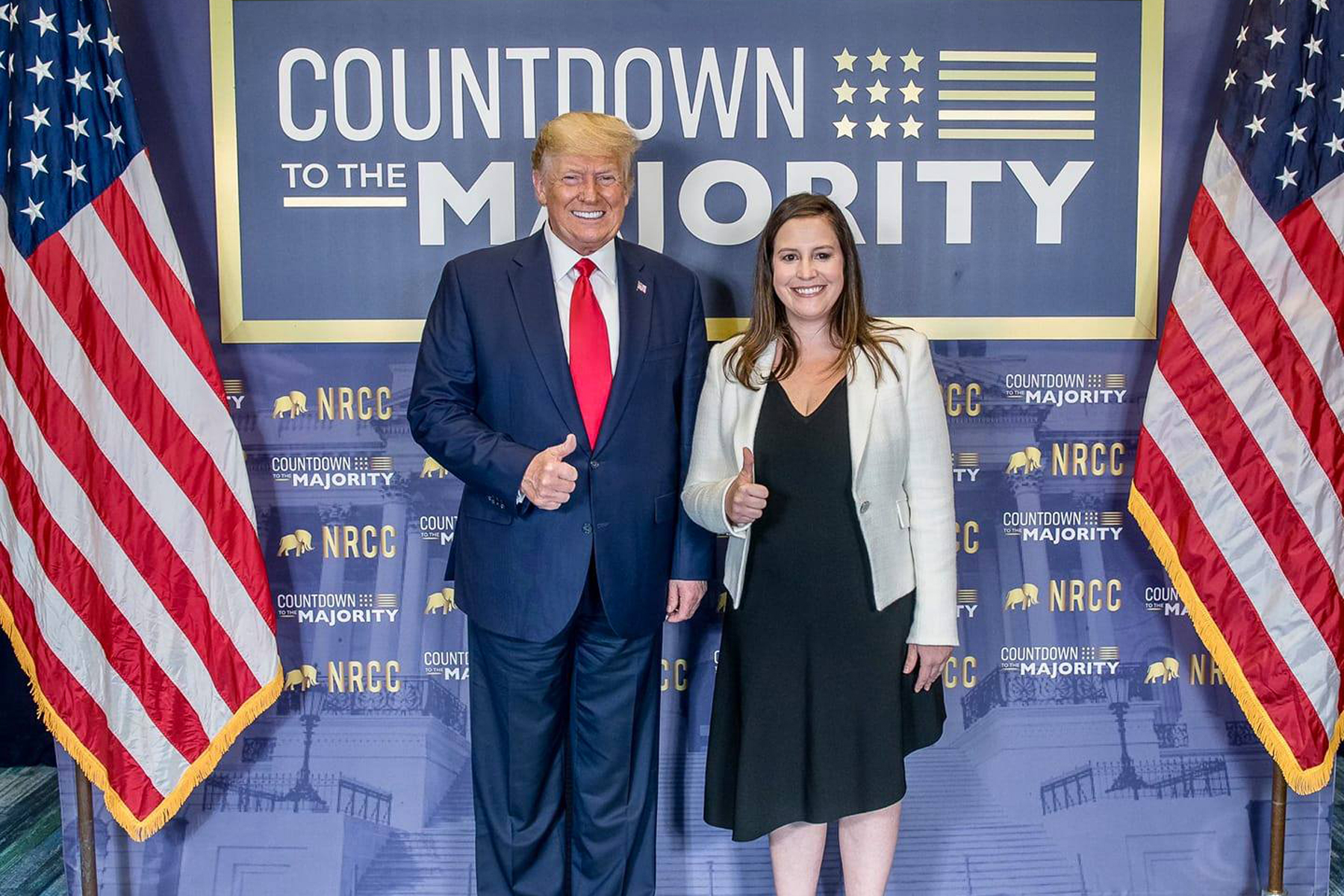 Lots of Republicans are close with the gun lobby. But for Elise Stefanik, the third-ranking Republican in the House, the relationship is more like: Until death do us part.

Stefanik’s husband, Matt Manda, is the public affairs manager for the firearm industry’s top trade association, the National Shooting Sports Foundation. Despite the sporty branding, NSSF does the bidding of hardcore gunmakers. Its board of governors includes the CEO of Daniel Defense, the gunmaker whose AR-15 was the massacre weapon in Uvalde, as well as executives from Smith & Wesson, Glock, Beretta, Sturm, Ruger & Co, and Hornady — maker of ammo it bills as “Accurate. Deadly. Dependable.”

Headquartered in Newtown, Connecticut — the same Newtown where 20 first graders were slaughtered in 2012 with an AR-15 — NSSF also battles for the firearms industry in Washington, D.C., spending $5 million on lobbying in 2021. NSSF is also a significant political donor. Over her career, Stefanik’s political bids have been backed by nearly $20,000 from the NSSF’s political action committee.

Conflicts of interest are not unheard of among D.C. power couples, but experts call the Stefanik/Manda matter extreme. “It is unique for a member’s spouse to be employed by an organization that lobbies so heavily on behalf of industry,” says Donald Sherman, Vice President of Citizens for Responsibility and Ethics in Washington (CREW), who calls the setup “legal but dubious.” For NSSF, he adds, hiring Manda “is the next best thing to something that would be illegal — which is having a member [of Congress] on the payroll.”

Stefanik represents far upstate New York in Congress. Harvard educated, she began her House career as a moderate and Trump critic. But Stefanik has since MAGApilled — sacrificing principle for power — rising to become Conference Chair last year. (She replaced Rep. Liz Cheney, who made the opposite political calculation and was ousted by her colleagues for challenging Donald Trump’s lies about the 2020 election.)

In recent weeks, Stefanik has become notorious for having run political ads echoing the “Great Replacement” theory — the racist conspiracy embraced by the mass shooter in Buffalo. (Stefanik’s team denied racist intent behind the ads.) Her star continues to rise in Trumpworld, however, and she’s even been rumored as a potential running-mate should Trump bid for the Oval Office in 2024.

The exact date of Manda’s hire by NSSF is unclear, but he began writing under his byline on the firearms trade group’s website in early 2020. A former Hill staffer for Rep. Kevin Yoder (R-Kan.), Manda is not a registered lobbyist. But his intimate relationship with Stefanik gives him the kind of daily access to power that most industry insiders could only dream of.

“You’d be hard pressed to find an example — on either side of the aisle — where a member’s spouse has been hired by a lobbying arm on such a hotly contested issue,” says Sherman, of CREW. “Having hired Elise Stefanik’s husband,” he argues, “means that they will get more influence over policy making — in that office and in her caucus.”

Manda’s unusual line of work was first reported by the Albany Times Union in the wake of mass shootings in Buffalo and Uvalde. NSSF did not respond to questions about Manda or his employment. But on Monday, Manda published a letter to the editor insisting that he is “not a lobbyist” and has never asked his wife “to vote anyway on anything.” He added that any suggestion that his marriage gives him “improper influence” with a top GOP leader “is sexist.”

In the letter, Manda also insisted his NSSF employment hasn’t been “hidden.” But the only public disclosure that Rolling Stone could find is buried in a 2021 personal financial disclosure by Stefanik, listing the National Shooting Sports Foundation as the source of “spouse salary.” Stefanik’s office did not respond to questions, including what portion of her household income is accounted for by wages from the gun industry.

Beyond family financial gain, Stefanik has gotten unusual publicity from NSSF, including a lengthy Q&A about her Second Amendment bonafides published on the trade group’s website in 2021.

And the New York Republican has also doted on NSSF executives. This April, shortly before the recent rash of mass shootings, Stefanik delivered a speech before NSSF’s “Congressional Fly-In” event in Washington D.C., attended by “chief executives and other C-suite executives from the firearm and ammunition industry,” who jetted to the nation’s capital in a “show of force.”

Stefanik provided the firearms honchos with an update on “the legislative landscape in the lower chamber” and inside dish on the GOP’s strategy “to take back the majority in the House.” We know this because Manda, her husband, wrote about the event for the NSSF website under his byline. (Despite the writeup’s journalistic trappings, Manda did not disclose his personal connection to Stefanik.)

Stefanik is not a newcomer to gun advocacy. She touted an A+ rating from the NRA during her latest election bid. But she’s become more active as a legislator on gun issues during the period that Manda has been working with NSSF — including sponsoring the Second Amendment Guarantee Act of 2021, which would strip states of the right to place restrictions on assault weapons, including AR-15s.

On Tuesday, Stefanik introduced a “gun safety” bill meant to counter what she blasted as the Democrats’ “radical gun control agenda.” It would give gun owners a $250 tax deduction for gun safety expenditures — taking a concealed-carry course, for example, or for purchasing a gun safe.

On Stefanik’s government website, the bill received a quote of praise from a her husband’s boss, NSSF senior vice president of Government and Public Affairs, Lawrence Keane: “NSSF is extremely grateful to Congresswoman Stefanik,” Keane said, “for her leadership on on true firearm safety legislation that respects Second Amendment rights.”