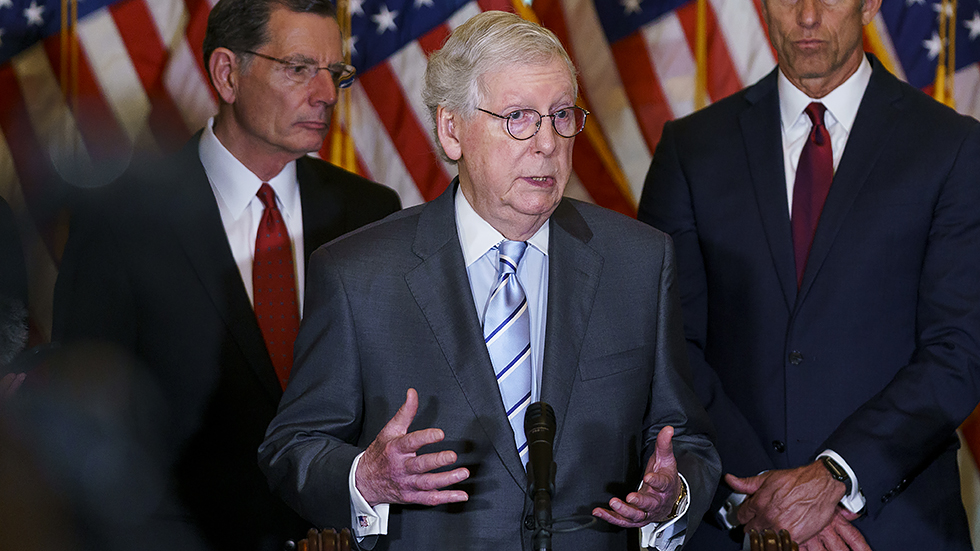 Cornyn’s participation in the negotiations opened the door for another reliable Trump ally, Sen. Thom Tillis (R-N.C.), to play a greater role in the negotiations. This has balanced the influence of Republican negotiators who are seen as more moderate and more likely to endorse reforms that could wind up roiling the pro-gun rights GOP base.

There is plenty of skepticism that McConnell and Cornyn, who have received high grades from gun rights groups, will sign off on a bipartisan agreement. The two GOP senators have been outspoken in opposition to gun control after other mass shootings.

One Democratic senator said McConnell through his allies is keeping tight control over the scope of the negotiations to ensure it doesn’t produce a deal that divides his conference and opens his GOP colleagues to harsh criticism from Second Amendment activists.

“It’s either going to come together or it’s not, and the person who’s going to decide whether it comes together is Mitch McConnell,” said the Democratic senator speaking on background.

McConnell on Tuesday said he wants to see a deal to address gun violence in the wake of mass shootings in Buffalo, N.Y., and Uvalde, Texas, but he emphasized any legislation that comes to the floor must not be so broad as to turn off Republicans.

“Everybody would like to — almost everybody I think — would like to get an outcome that’s definitely related to the subject matter,” he said.

The GOP leader has also said he wants “a bipartisan solution that’s directly related to the facts of this awful massacre,” referring to the mass shooting in Texas.

As a result, the emerging Senate package is trending further and further away from proposals that Democrats wanted to expand background check requirements and raise the age for purchasing an AR-15–style rifle.

Cornyn, who is interested in becoming the top Senate Republican down the line, says the proposal to raise the minimum age for buying an AR-15–style rifle is off the table, as are proposals to require background checks for more commercial firearm and gun sales.

Republican negotiators are also pushing for incentives to encourage states to provide juvenile crime records to the FBI’s background check database, instead of a federal mandate requiring them to do so.

Likewise, any red flag legislation included in the package will provide incentives for states to establish laws to take away guns from people deemed dangerous to the community but will not require states to do so.

McConnell on Tuesday praised Cornyn as the leading Republican expert on gun violence.

“Sen. Cornyn knows more about this subject than anybody we have in the Senate. He also happens to represent Texas, and I think he’s working in good faith with Sen. Murphy to get an outcome,” he said, referring to Sen. Chris Murphy (D-Conn.).

Senate Republican aides say McConnell also saw Cornyn as a good choice to lead the negotiations. He is a senior member of the Senate Judiciary Committee, which has jurisdiction over gun control, has a track record working on gun violence measures, and 21 of his constituents died in Uvalde. Moreover, McConnell has a strong working relationship with Cornyn, and there is little chance there will be any policy daylight between the two.

Sen. Pat Toomey (R-Pa.) negotiated an amendment with Sen. Joe Manchin (D-W.Va.) to expand background checks for all firearms sold at gun shows and over the internet, though it created an exception for sales and transfers between friends and family.

The idea of Toomey, Graham or other Senate GOP moderates negotiating gun control legislation with Democrats gives some conservatives heartburn.

Rep. Marjorie Taylor Greene (R-Ga.) knocked Graham on Tuesday for what she views as his willingness to vote for gun control legislation.

“Here’s the major problem: Why would we have a Republican senator from South Carolina ready to go to vote on radical gun control bills?” she said on an episode of “MTG Live,” apparently referring to Graham’s work on red flag legislation.

Other conservatives point to Toomey’s C rating from the NRA.

The entry of Cornyn and Tillis into the center of the negotiations ensures they are not likely to produce any compromise along the lines of the 2013 Manchin-Toomey amendment, which garnered only four Republican votes in the Senate.

Toomey and Sen. Susan Collins (Maine) are the only two Senate Republicans in the chamber today who voted for expanded background checks.

A Republican aide familiar with the negotiations said they’re going “nowhere near” Manchin-Toomey.

Democrats used the failed Manchin-Toomey proposal, which was strongly opposed by the National Rifle Association, as political ammo to paint Republicans as unreasonably opposed to gun control.

McConnell is making sure a similar scenario doesn’t befall his conference before this year’s midterm elections, with control of the Senate in the balance.

Senate Minority Whip John Thune (R-S.D.) said Cornyn was a “natural” choice because he’s “viewed as a credible voice with conservatives on this issue.”

Thune said both Cornyn and Tillis are senators who are “solutions-oriented” but also “represent the broad expanse of our conference on this issue.”

Tillis is viewed by Republican colleagues as a lawmaker who is willing to cut a deal with Democrats but won’t be tempted to go too far to meet Democrats’ demands.

The North Carolina senator raised questions about red flag proposals last month and this week quashed the idea of raising the age limit for buying an AR-15–style rifle to 21, demonstrating that he’ll stand his ground in negotiations.


Biden adviser: Elections likely to come up in meeting with Brazil’s Bolsonaro

Cornyn, who isn’t up for reelection until 2026, made clear this week that he won’t agree to any legislation that makes it tougher for law-abiding citizens to buy semi-automatic handguns and rifles, no matter their age.