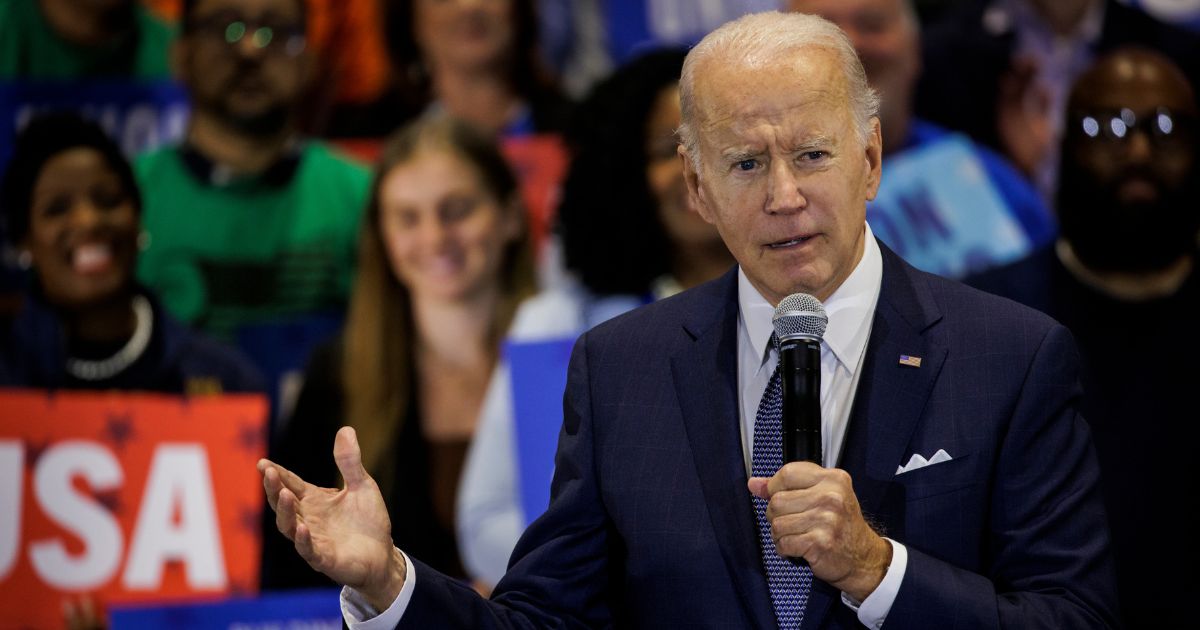 It’s not often that I agree with our current president, but it does happen. Of course, most of those agreements happen when he says something by mistake, as he did Friday.

Biden made the comments Friday during a Democratic National Committee event at the National Education Association headquarters and, although it’s not always easy to understand what the president says when he speaks publicly, I’m pretty sure his handlers didn’t send him out to pose a rhetorical question and then answer it himself like this:

Right. To defend Americans. That’s what firearms — and our Second Amendment protections — exist to do.

“It’s time to pass the assault weapons ban. Look, I support the Second Amendment. I have two shotguns … the only thing I ever really do is target practice; I haven’t done that in a long time. But here’s the thing: There’s no justification for a weapon of war. None. The speed of that bullet is five times that [of what] comes out of the muzzle of most weapons. It can penetrate your vest. By the way, as I pointed out when I got it passed the first time as a senator, in Delaware, we’re a big gun-owning state. A lot of duck hunters, a lot of hunters. And I’d been going, and I literally went up and down the streams campaigning and going to the people who were part, who belonged to the NRA, and others. And I’d say, ‘How many, how many deer out here are wearing Kevlar vests? But I’m — seriously, think about it: What in God’s name do you need an assault weapon for? It’s an assault weapon designed to kill people, to defend America, to defend people.”

So many logical fallacies, so little time. But let’s see if we can unpack that.

First: As Western Journal readers undoubtedly know, there’s no such thing as an “assault weapon.” Or rather, every weapon is an assault weapon — weapons, by definition, are made for assault. The term is a bugaboo, designed to bring up images of a psychopathic Rambo (the one from the book, not Stallone’s troubled hero) mowing down innocent civilians with a super-weapon fired one-handed with uncanny accuracy.

Do you think that Biden meant to admit that AR-15s are for self-defense?

Second: Scant evidence exists that the Federal Assault Weapons Ban of 1994 had any positive effect during the 10 years it was in force. Certainly, there is insufficient evidence to justify impinging on the God-given right to the defense of human life ensconced in the Second Amendment.

Third: Biden claims to own two shotguns, but says there’s “no justification for a weapon of war.” Apparently, our commander-in-chief is unfamiliar with the use of shotguns in war (my personal favorite being the Mossberg 590A1). Again, all weapons are, at least potentially, weapons of war; they wouldn’t be of much use otherwise.

Fourth: The “speed of the bullet” is determined by the ammunition used, not the rifle. A comparison of rifle ballistics (there’s a pretty handy reference here) shows that a typical .223 round fired by an AR-15 has a muzzle velocity roughly in keeping with the other rounds on this list. Sure, a .223 round is two to three (not five) times faster than the typical pistol round, but that’s comparing apples to oranges. Actually, it’s not even that close — more like apples to popcorn shrimp.

Fifth: According to CBS News, about 34.4 percent of Delaware’s residents own guns, putting Joe Biden’s home state 41st out of our 50 states in gun ownership. That, to Joe Biden, apparently constitutes a “big gun-owning state” — which should give you a pretty good idea of what the president thinks the percentage of gun ownership should be.

Sixth: Does anyone think — I mean, really think — that Joe Biden “literally went up and down the streams campaigning” for a bill that the citizens he represented couldn’t vote for directly and that he already supported and that, in fact, was so widely supported following the Waco fiasco that 95 out of 100 senators voted for it? Exactly what are we supposed to believe he was campaigning to get hunters to do?

Seventh: If we can get past that hurdle of believability, does anyone then think that Biden actually asked those hunters how many deer were wearing Kevlar vests? I don’t care how many times he claims to be “serious” about the issue, that claim is decidedly unserious.  How stupid does he think his voters are?

Bonus: Just in case that was too lucid for you, the leader of the free world then added the following: “But folks, look: It just, we just, well we’re just, it’s way outta hand. I’ve taken on the RNA and I’ve beat them before and I plan on doing it again.”

Apparently, Joe Biden thinks he has defeated ribonucleic acid. Or maybe he was referring to the Religion Newswriters Association? The world may never know.

You can try to figure it out here:

What in God’s name do you need an assault weapon for? It’s funny that you should phrase it that way, Joe.

In God’s name, we need firearms to defend those made in God’s image — whether ourselves or those around us who are threatened by people who, themselves, have firearms. Or knives. Or pointed sticks.

No, we’d rather not take someone else’s God-given life to protect others or ourselves, but sometimes that’s the best option available to us in a fallen world. Sometimes it’s the only option.

In other words, we sometimes need firearms “to kill people, to defend America, to defend people,” as you so aptly stated, Mr. President.

May God grant that we never have to use them for that, and may God have mercy on us if we need to but are unprepared to do so.

George Upper is the former Editor-in-Chief of The Western Journal and an occasional co-host of “WJ Live,” powered by The Western Journal. He is currently editor-at-large. A former U.S. Army special operator, teacher and consultant, he is a lifetime member of the NRA and an active volunteer leader in his church. Born in Foxborough, Massachusetts, he has lived most of his life in central North Carolina.

George Upper, editor-at-large of The Western Journal, is a former U.S. Army special operator, teacher, manager and consultant. Born in Massachusetts, he graduated from Foxborough High School before joining the Army and spending most of the next three years at Fort Bragg. He now lives in central North Carolina with his wife and a Maine Coon named Princess Leia, for whose name he is not responsible. He is active in the teaching and security ministries in his church and is a lifetime member of the NRA. In his spare time he shoots, reads a lot of Lawrence Block and John D. MacDonald, and watches Bruce Campbell movies. He writes “The Upper Cut,” a weekly column that appears quarterly (more or less). He is a fan of individual freedom, Tommy Bahama, fine-point G-2 pens, and the Oxford comma.