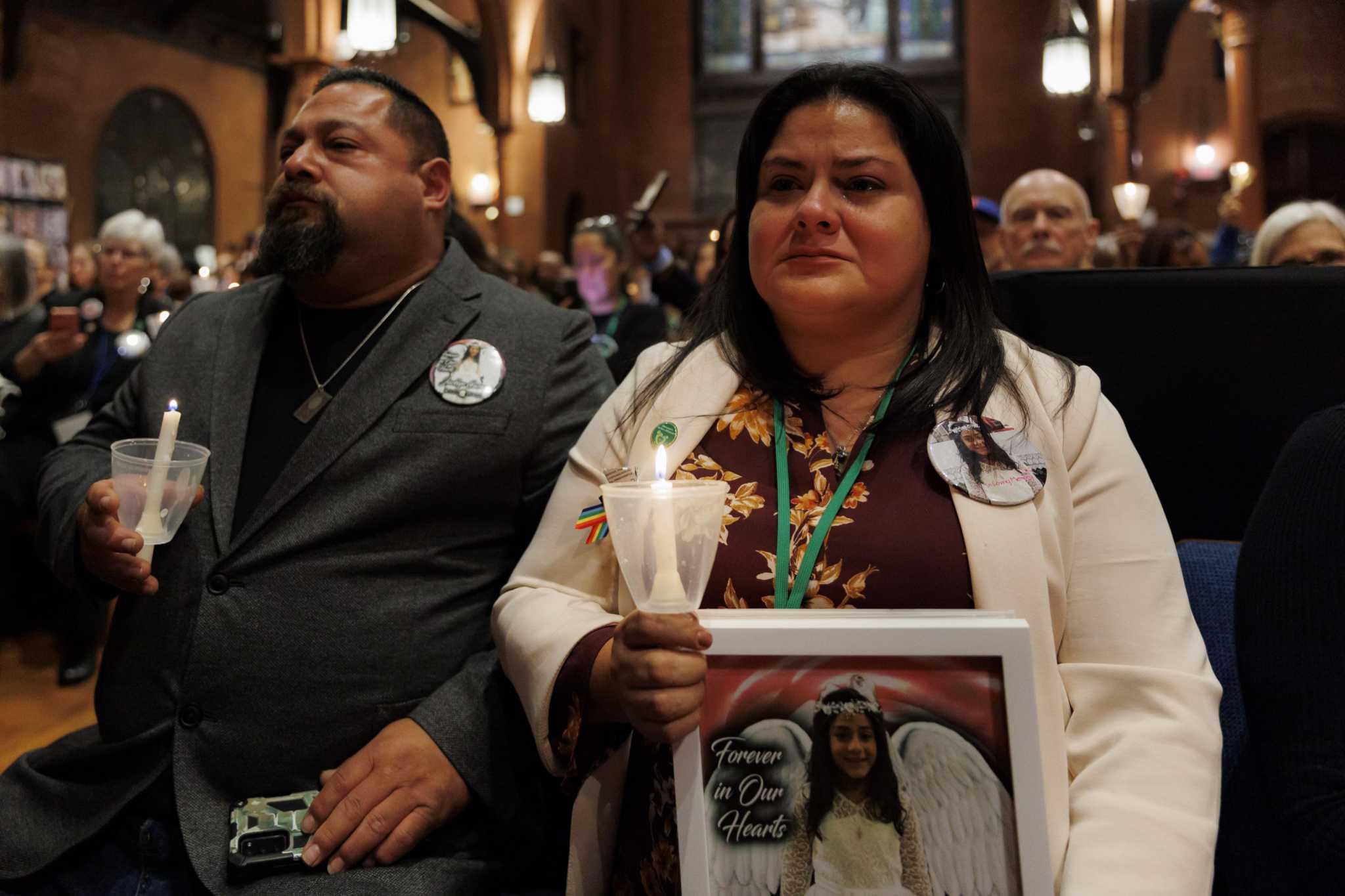 Javier Cazares visits Jackie’s room to begin and end each day, wishing her a good morning and a good night.

This is how the grieving parents have made it through the days since May 24 when Jackie was one of 19 children and two teachers murdered at Robb Elementary School. There is no laughter from Jackie’s room. There will be no family trip to Paris so Jackie can see the Eiffel Tower. There is only grief as they wrap their loving arms around the memory of their baby girl.

“I can’t ever really sit there and literally think that she’s not there,” Gloria Cazares said. “Because then I start, it’s not good. So, we just pretend.”

There are many ways to mark the passage of time from a tragedy. One way is to say it’s been nearly seven months since the massacre at Robb.

Another way is to say that since Robb there have been
more than 400 mass shootings, according to the Gun Violence Archive. These are shootings in which four people, not including the shooter, are either injured or killed.

And yet another way is to acknowledge the milestones and birthdays now celebrated at cemeteries. It was Jackie’s
10th birthday
on June 10. Her cousin
Annabell Guadalupe Rodriguez
should have turned 11 on Nov. 29. Irma Garcia,
one of the murdered Robb teachers, should have turned 49 on Sunday.

Another is to think of the families during this holiday season. It’s been about three weeks since the Cazares family didn’t celebrate Thanksgiving because, as Gloria Cazares said, that Thursday was so hard “we just kind of acted like it was another day.”

In a week, it will be Christmas — and Gloria Cazares has
no idea how her family will navigate Jackie’s favorite holiday. Jazmin Cazares, Jackie’s 17-year-old sister, said the thought of celebrating fills her with survivor’s guilt.

Time marches forward, but time froze for the Cazareses on May 24. And so they pretend Jackie is still alive. They visit her room to feel her presence — “The first time I got any decent sleep (after the shooting) is because I fell asleep in her bed,” Jazmin said. They tend to her memorial at Uvalde’s Town Square. And they advocate with every fiber in their being for gun reform.

If we are going to truly “stand with Uvalde” and honor the 21 lives lost at Robb Elementary School, then we must also sit with the anguish of the Uvalde families. We must defy time and feel their pain with the same acute urgency and rawness we felt on May 24 and May 25; just as we must understand how our collective failure to pass commonsense gun reforms invites new tragedies — Highland Park, Chesapeake, Colorado Springs — and sends the message that the lives lost in Uvalde didn’t matter enough.

For these reasons, the Express-News Editorial Board traveled to Uvalde earlier this month and met with the Cazareses as they prepared for a trip to Washington, D.C. to join families from the July Fourth shooting in Highland Park, Ill. to advocate for an assault weapons ban during the lame-duck session. When state lawmakers return to session next year, the Cazares family and others will advocate for raising the purchase age of assault-style weapons from 18 to 21 — a policy that could have prevented the massacre at Robb and yet has zero traction with Republican lawmakers.

“But what else do we have to lose?” Gloria Cazares said. “I lost one of the most important people in my life. And so we will continue. No, as hard as it is, I will continue to fight for her until the day that I die.”

A promise to Jackie

State Sen. Roland Gutierrez arrived at the Staff Sgt. Willie de Leon Civic Center around dusk on May 24. He was not especially familiar with Uvalde. It was part of his district, but it’s long been a Republican stronghold. The San Antonio Democrat had few connections.

Inside and outside the center were clusters of families, huddling together, praying.

“It was hard to approach a family. I couldn’t do it,” he told us in August. “That’s something I feel cowardly about in the aftermath.”

The families were waiting for DNA matches, and as those came in late in the evening on May 24, “you would hear like, different families they would get a piece of news, and then you would just hear the most incredible wailing,” he said.

And it would happen again, and again, and again — unbearable grief puncturing an otherwise silent spring night — until finally at about 11 p.m. Gutierrez left, feeling as though a bomb had detonated in the community.

Since the shooting, Gutierrez has been a constant presence in Uvalde, and he has become close with many of the families as he champions gun safety reforms,
challenges the official narrative
from the Texas Department of Public Safety about its disastrous response to the shooting and has filed legislation to end qualified immunity for law enforcement and create
a $300 million victims’ compensation fund, including $7.7 million for each family to represent the 77 minutes law enforcement waited to enter rooms 111 and 112.

He might as well have been speaking for many of the families.

“He really doesn’t care who he pisses off,” Gloria Cazares said. “And I think that’s where we’re at.”

Pissed off. In the days after the shooting, an outpouring of grief flooded Uvalde. Massive memorials for the children formed outside Robb Elementary School and at Uvalde’s Town Square. Even now, signs all over town preach unity: “Uvalde Strong,” “Pray for Uvalde,” “We stand with Uvalde.”

Such expressions offered immediate support in the face of calamity. But with time, it’s unclear just what “Uvalde Strong” means in a community now so visibly fractured — a town where so many now display the
“Uvalde Strong” logo upside down.

Uvalde is a small city of 15,000 residents, and the Cazareses said they have lost friends over their activism for gun reform and criticism of law enforcement. Those
officers waiting in a hallway, scorned by so many, are somebody’s child or cousin or close friend.

“‘Uvalde Strong’ is us, the ones who are trying to make a difference,” Javier Cazares said. “Everybody else is in the background, hiding, you know. They’re afraid to have a target on their back. Whether there’s a backlash, you know, because of their job or somebody that they know, they are just afraid to speak up.”

Marissa Lozano, sister of Irma Garcia, said in the days after the shooting, which was followed by her sister’s husband Joe Garcia dying of heartbreak, she found herself thinking, “We’re going to fight for them,” referring to her sister and other victims. “And this town’s going to turn against our family.”

And that’s exactly how she feels when she sees the lack of unity for gun safety and a lack of accountability at DPS and other institutions.

One way to fight for the victims is to run for office.

Javier Cazares, who owns a glass installment company, ran a write-in campaign for Uvalde County commissioner —
and lost. He lost to Mariano Pargas Jr., the city’s acting chief on May 24 who knew children were alive in the classrooms. After the election,
Pargas resigned before getting fired.

Uvalde County voted overwhelmingly for Abbott and other Republicans who have opposed gun reforms.

Add it all up, and Manuel Rizo, Jackie’s uncle said, “the lives of the children and the teachers didn’t matter enough to get people to come out to vote.”

This is yet another layer of suffering for many surviving families. One reflected in the vote, but vocalized by disgraced DPS Trooper Crimson Hux Elizondo,
hired and then fired
by the Uvalde school district’s police department, who said on the day of the massacre: “If my son had been there, I would not have been outside. I promise you that.”

Jesse Rizo, another uncle to Jackie, has compared the Robb Elementary school shooting to 9/11. But Uvalde never experienced anything like the national unity in the aftermath of that tragedy.

There are sharp divisions over politics, gun reforms, whom should be fired, fundraising disbursements for families and even attending a special Houston Astros game this summer.

“Our town is divided. Our teachers feel betrayed. Some family members don’t even speak to each other,” Rizo said at an
Oct. 27 DPS hearing.

Given the community’s divisions and convulsions, would Gloria and Javier Cazares ever leave? No, they said. Jackie is in Uvalde.

“I made a promise to her,” Javier Cazares said. “I am going to stay and fight.”

In recorded comments to National Rifle Association conference attendees in Houston on May 27,
Abbott said, “I’m in Uvalde this afternoon working to heal the brokenhearted. We will bind up the wounds of the people of Uvalde and once again restore the luster to a community known for its warmth, its friendship and its values.”

Maybe Abbott really believed these words, but like his infamous comment on May 25 that
“it could have been worse”
if not for a swift police response, this statement about healing diminishes unfathomable suffering and veils truth.

Rather than bind wounds, the cascading misinformation from DPS and lack of accountability has only added to pain and confusion.

Simplistic rhetoric about healing, or slogans such as “Uvalde Strong,” fail to acknowledge how the surviving families now live with questions that will never be answered, but only felt.

Lozano told us she wants to stand inside her sister’s classroom at Robb Elementary School, to get as close as possible to her sister’s last moments.

“I need to go in that school,” she said. “Before they tear it down, I want to walk that school to see where my sister took her last breath.”

The Cazareses also want to stand inside the classroom. They said Jackie was still alive when emergency workers finally entered — and the family is haunted by questions about her last moments.

“How long did my daughter suffer alone?” Javier Cazares said.

Could she have been saved if police had entered the room sooner? What was she thinking? Whom was she with?

“I think it’s the more scarier unanswered questions that frustrate me that we will never know,” Jazmin said.

At dusk on Dec. 3, Gloria Cazares tended to Jackie’s memorial at Town Square. Javier and Jazmin Cazares sat on a nearby bench. The square had been decorated for Christmas, and shimmering angels lined the pathway to the memorial.

In the distance, children played in the early darkness. Murals honoring each of the victims could be found all around downtown. Jackie is pictured in the dress she wore for communion two weeks before she was murdered, the Eiffel Tower in the background.

Soon, the Cazareses and other Uvalde families would be on their way to Washington, D.C., to advocate for an assault weapons ban and other gun reforms. Part of a promise the Cazareses have made to Jackie to fight for her and other victims of gun violence. A promise born from boundless love, transcending life and death. But also a burden that should not fall solely to grieving families. Seven months after Robb, and many shootings later, what is our promise to America’s grieving families? What is your promise?