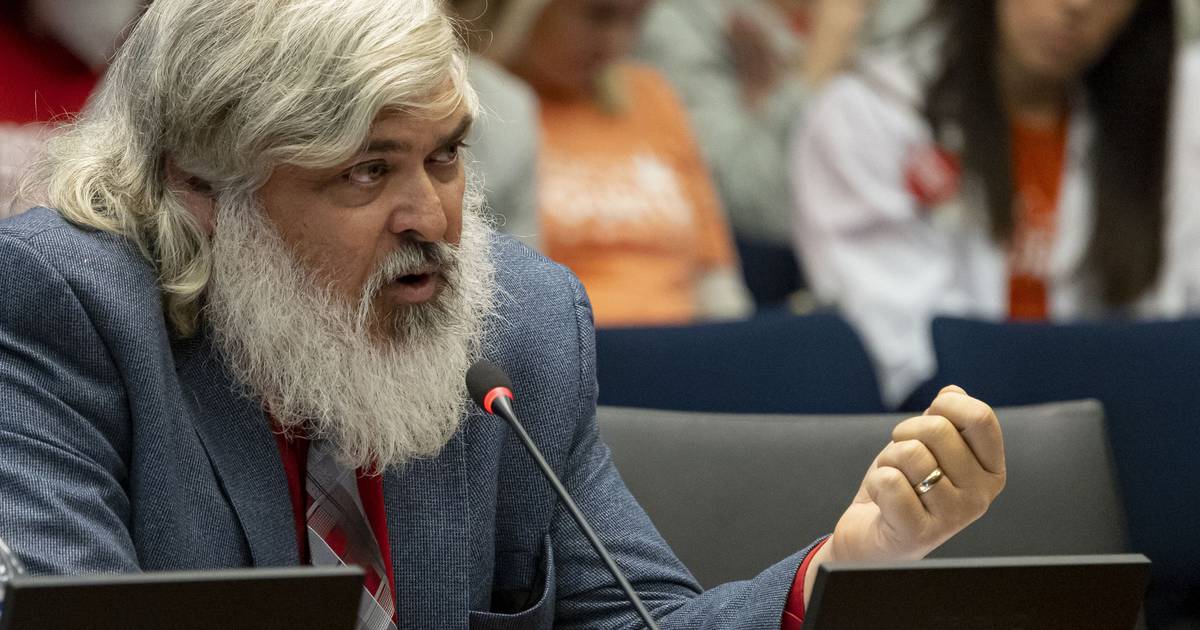 Guns rights advocates criticized a proposal to ban a wide array of guns and high-capacity magazines at a state legislative hearing Tuesday, calling it a “dangerous” measure that will make criminals out of law-abiding gun owners.

Todd Vandermyde, a longtime gun rights lobbyist, warned that the proposal unveiled last month by Democrats in the Illinois House could lead to “civil disobedience” for gun owners like him who believe the bill runs counter to their Second Amendment rights.

“I don’t know how you’re going to enforce this. You can’t put us all in jail,” Vandermyde told members of the House Judiciary Committee. “(Gun owners are) not going to surrender things. They’re not going to turn them in. So I ask you, what is the enforcement mechanism? Are you going to send (Illinois) State Police house to house?”

Supporters of the measure, many in red T-shirts and from groups such as Moms Demand Action, filled a large swath of the gallery at hearing, the third to be held on the proposal.

The measure would outlaw the sale of certain high-capacity guns and was prompted by the mass shooting at Highland Park’s Fourth of July parade, where a gunman killed seven people and injured dozens more. It is sponsored by state Rep. Bob Morgan, a Deerfield Democrat who marched in the parade with his family.

John Weber, an official with the National Rifle Association, criticized the common shorthand of assault weapon as a “manufactured term” that gun control advocates use to describe AR-15s and other firearms.

He contended that the proposal discriminates against 18-to-20-year-olds by prohibiting them from hunting, and also argued that a magazine restriction that was part of 1994 federal assault weapons ban which expired in 2004 was ineffective.

“The legislation will not work because it’s been tried and failed,” Weber said. “More importantly, this bill’s dangerous and places an undue constitutional burden on a person’s ability to provide for their self-defense.”

Ed Sullivan, a contract lobbyist for the Illinois State Rifle Association, said that on the day of the shooting in Highland Park, a well-to-do northern suburb with little crime, there were several shootings in parts of Chicago that experience much more crime.

He testified that the bill does nothing to “uplift communities and end economic disparities” in Chicago neighborhoods most affected by violence.

“There’s probably more guns in my neighborhood than entire wards of Chicago, but we don’t have that violence.” Sullivan, a former Republican state representative from Mundelein, told legislators.

State Rep. Justin Slaughter, a South Side Democrat who sits on the Judiciary Committee, said the proposal was not meant to infringe on anyone’s Second Amendment’s rights. But he told the three gun rights proponents before him that backers of their position have yet to offer any solutions that address mental health issues, or “looking at this through a public health crisis lens.”

Vandermyde said it’s unfair for someone like him to have to give up his rights to own certain guns because of people who traffic in illegal guns or use them to commit violent crimes.

“I didn’t sell them those guns. I didn’t bring those guns in here,” he said. “I’m not running into the city on the weekend to shoot it up.”

Sullivan said gun rights advocates have gotten the short end of the stick on previous gun control legislation in the General Assembly, and that he doesn’t believe any kind of gun-ban proposal would be negotiable on his end.

“Every time we shift and support it, we’ve been run over,” Sullivan said of past gun control legislation. “As for a gun ban, there is not a place that we can go forward.”

Federal legislation banning such devices exists but law enforcement officials testified that getting the U.S. attorney’s office to prosecute gun cases isn’t always easy, and attacking the problem through county prosecutors would offer another option.

“There’s two avenues for prosecution and I think having more options on where we can prosecute, whether federally or whether locally, gives us that much more flexibility when we get an offender to bring to justice,” said Angel Novalez, the Chicago Police Department’s chief of constitutional policing and reform.

The legislation would also strengthen the state’s red flag law by extending the period someone can be barred from possessing a gun from six months to a year, and giving local prosecutors a greater role in that process.

The Highland Park shooting raised questions about the effectiveness of that law. The alleged shooter, Robert Crimo III, had a history of making threatening statements, but was able to legally purchase the rifle used in the shooting after his father gave consent for him to get a state firearm owner’s identification card at the age of 19.

Crimo has been in the Lake County Jail since July awaiting trial on various charges, including murder. His father, Robert Crimo Jr., was charged last week with felony reckless conduct for sponsoring his son’s FOID card.

State Rep. Kathleen Willis, a Democrat from Addison, indicated Tuesday that further discussions about the bill will take place but that restrictions are essential for the safety of the public.

“Where do we draw the line as to what firepower the average citizen can carry?” she asked. “We’ve heard testimony upon testimony about large magazine capacity. Now, I will certainly be open to discussion as to what constitutes large. Is it eight? Is it 10? Is it 15?

“I think that discussion is open to continue to have. But I think that we need to recognize that the average citizen, even the hunter, doesn’t need a magazine capacity of 30 (rounds) “ she said. “We have to put some restrictions out there.”

Legislators are expected to take up the issue when they reconvene early next month.

‘You don’t need an AR-15’: A look at some of Biden’s most inaccurate remarks about firearms and 2A supporters
America’s gun culture through the eyes of Australian reporter
NSSF-NRA Schism on Full Display at 2023 SHOT Show
ILA | New Hampshire: Anti-Gun Bills Scheduled for Public Hearing
Unchecked gun violence reveals who we are, as a nation