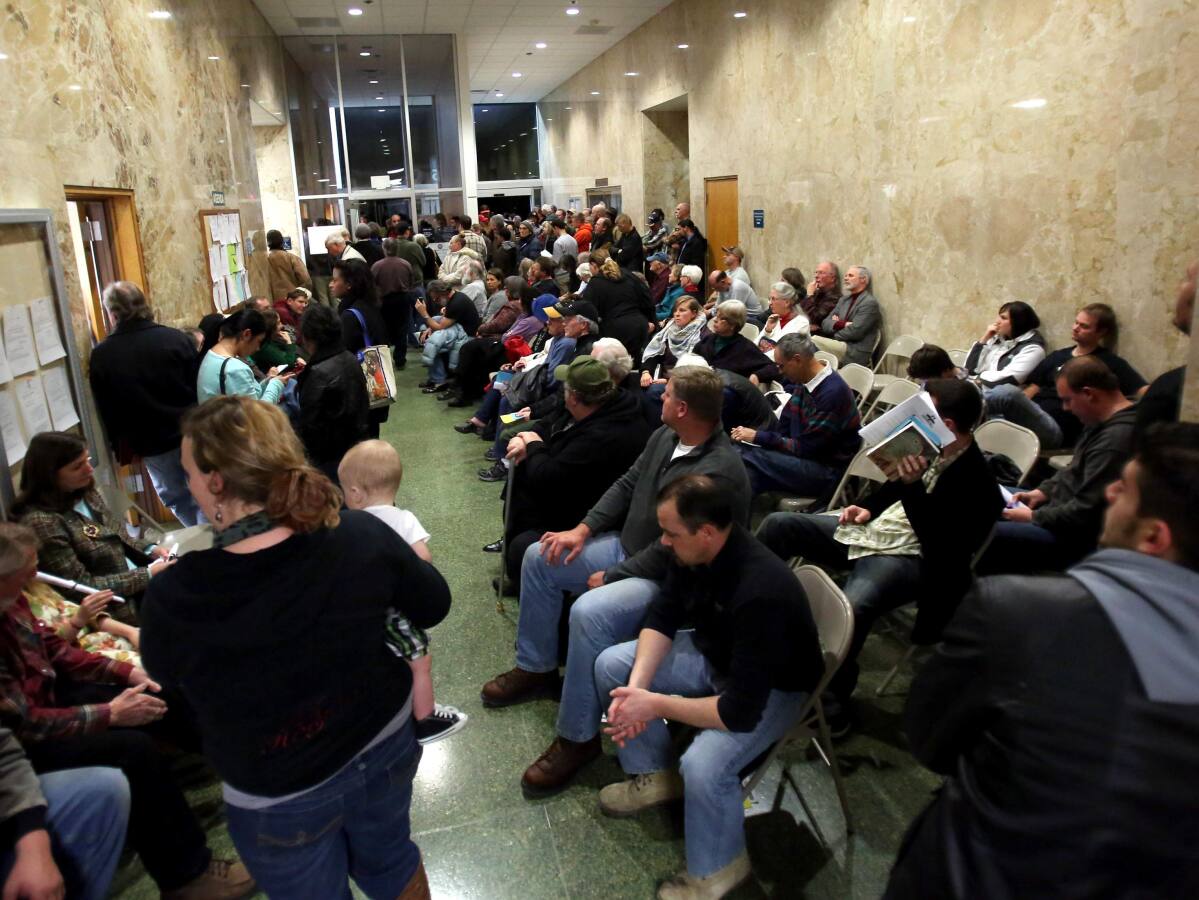 Madeleine Melo of Fort Bragg, widow of the North Coast’s most prominent recent victim of gun violence, spoke out Thursday night in defense of gun ownership at a public forum convened by Rep. Mike Thompson.

“I strongly support our right to own and use guns,” Melo told Thompson and six other public officials before an overflow crowd in the Sonoma County supervisors chambers in Santa Rosa.

In her next sentence, Melo, whose husband Jere Melo was murdered in the Mendocino County woods in 2011, said the “unchecked acts of violent criminals take away the rights of others to live a safe and protected life.”

Dozens of other speakers also bracketed the nation’s current debate over firearms and mass murder – sharply dividing over the prospect of added gun controls but agreeing that more mental health services are needed, especially for youths.

Ted Heinrich of Santa Rosa said he was “appalled by the reckless distribution of firearms in this country” and saying loopholes render gun regulations “meaningless.”

Mike Malone, a geologist, said it is “obvious to me there are those who oppose the Second Amendment” and that California gun owners are “in constant jeopardy of being criminalized.”

Thompson, D-St. Helena, a hunter and gun owner, was appointed chairman of the Congressional Gun Violence Prevention Task Force in the wake of the Dec. 14 massacre at a Newtown, Conn., elementary school.

He opened the public forum by declaring that it is “not a hearing on the Second Amendment” and noting that there is “no magic wand that can be waved” to prevent another such tragedy.

More than 800 people have been killed by guns nationwide since the shooting at Sandy Hook Elementary School, Thompson said.

Madeleine Melo said she has struggled with the issue of guns “every day since Jere’s murder,” which occurred in August 2011 in the forest east of Fort Bragg. His killer, Aaron Bassler, was shot dead by law enforcement snipers after a 36-day manhunt.

Bassler used a semi-automatic weapon that was given to him by a family member, Melo said.

But she also noted that Ian Chaney, who was with her husband in the woods that day, shot back at Bassler and was able to escape.

“If he did not have that gun, Ian would not be standing here today,” she said, accompanied by Chaney at the microphone.

Melo called for enforcement “of the laws we already have” and said gun owners “have a responsibility to keep those guns out of the hands of the mentally ill, drug users and convicted criminals.”

James Johnson, a retired school psychologist, called for “clear and available help” for all students manifesting mental health problems. Johnson said some students reach age 12 or 13 who are “clearly out of control.”

Margaret Fishman, who described herself as a “liberal Democrat” and a gun owner, called for a federal ban on assault weapons and high-capacity magazines, a step Thompson also has endorsed.

She also criticized the National Rifle Association, saying it represents gun manufacturers’ profits, and “does not speak for all gun owners.”

Russell Kloer of Sonoma said he is leery “when fear and hysteria take over” the debate on guns. The NRA offers a program to educate people to be “safe around firearms,” he said.

John Davis was one of several speakers who faulted the idea of making schools gun-free zones. “All that says to the criminals is, ‘Come in and shoot me,’ ” he said.

Gary Lucas said that mass killers should be consigned to anonymity, denying them the “element of immortality.”

“Get the media to quit naming the names (of killers),” he said.

Thompson took issue with several speakers who asserted that “psychotropic drugs” were a factor in mass murders, saying he had heard the same comment in two previous public forums but has found no evidence for it.

“We can’t track it down,” Thompson said.

Ken Cavalli of Sonoma faulted government attempts to deal with gun violence and other issues. “The phrase, ‘I’m from the government, I’m here to help’ scares me,” he said.

Kathy Graham of Mendocino County, who identified herself as a recruiter for the NRA and a grandmother, said the organization teaches children how to use firearms.

“Children need to know how to protect themselves,” she said.

A long line formed outside the county Administration Building 30 minutes before the forum started, and about 150 people sat and stood inside the supervisors’ chambers, with many more in the lobby and hallway outside. More than 70 people signed up to speak.

He said 1.1 percent of the people who apply to buy weapons are denied, and about 19,000 people who legally bought weapons have since been disqualified from ownership.

Thompson said his task force, which consists of 12 other House Democrats, will develop legislative recommendations by the first week in February.

You can reach Staff Writer Guy Kovner at 521-5457 or guy.kovner@pressdemocrat.com.