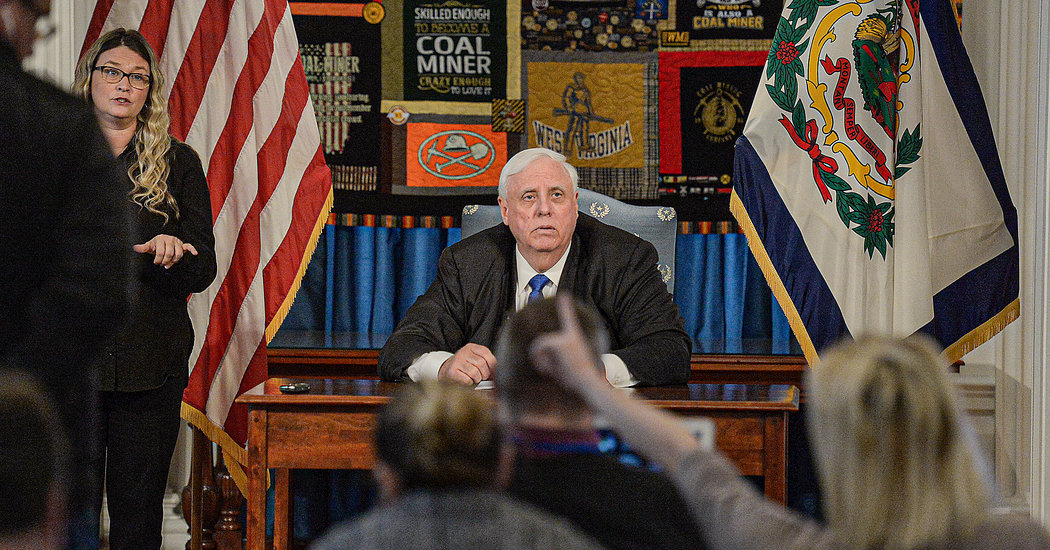 WASHINGTON — When Deborah Frank Feinen, the mayor of Champaign, Ill., drafted an emergency powers declaration last Thursday to confront the coronavirus pandemic, she was proud of her city’s early preparation. But by the time she got to work the next morning, the National Rifle Association had blared a “national alert” saying “anti-gun extremists” were moving “to undermine our firearms freedom.”

The city government was soon under siege.

“We were talking about how to get food to kids when schools were closed, and suddenly I’m getting Facebook messages about how I’m violating the Constitution and taking away people’s rights,” Ms. Feinen said in an interview. Now, in addition to working on plans for fire and police departments, emergency supplies, and helping small businesses weather state-mandated closures, “I’m obsessively looking at my email, checking for threats.”

The former New York police chief Bernard Kerik, a felon pardoned by Mr. Trump, posted on Twitter on Sunday, “Why do I feel this hysteria is being created to destabilize the country, and destroy the unparalleled and historic economic successes of President @realDonaldTrump?”

On Monday the federal government issued new guidelines telling Americans to avoid bars, restaurants, travel and gatherings of more than 10 people. Some trusted figures on the right have joined the call for more dramatic action. Newt Gingrich, the former House speaker, said the Trump administration should be preparing military hospital ships and cruise ships to handle an overflow from the nation’s hospitals. And the latest maneuver on the right is to label the enemy “the Chinese virus,” as Mr. Trump did Tuesday morning.

But the president has not rebuked his allies for their denialism. During a news conference, Mr. Trump was asked about Mr. Nunes’s Fox News interview on Sunday, in which he encouraged Americans “go to a local restaurant, go to your local pub.” Mr. Trump said he was not familiar with the comments.

In Florida, some megachurch pastors connected to Mr. Trump are defying public health officials’ guidance to avoid large gatherings, according to reports by The Miami Herald and the liberal People for the American Way’s Right Wing Watch project. On Sunday, designated by Mr. Trump as a national day of prayer, the Rev. Rodney Howard-Browne, an evangelical pastor and conspiracy theorist who has prayed with Mr. Trump in the White House, encouraged his tightly packed congregation to shake hands, to prove they were not “pansies.”

“Because the climate change narrative for global governance failed,” Mr. Howard-Browne said in a video of the service, “they are using the World Health Organization to then come in and take over the control of nations.” He added, “There’s going to be forced vaccines” to “kill off many people.”

In Kendall, Fla., the megachurch pastor Guillermo Maldonado, another Trump religious adviser, derided members of his flock who stayed “home in a cave afraid of the virus,” according to The Herald, saying, “If we die, we die for Christ.”

“There are a lot of people who are getting messages like this from media that they trust,” said Peter Montgomery, senior fellow at Right Wing Watch, who wrote about Mr. Maldonado’s service. “How does a public health official compete with that?”

On Monday, Senator Marco Rubio, Republican of Florida, tried to combat the disinformation.

“Please stop spreading stupid rumors about marshall law. COMPLETELY FALSE,” he wrote. “We will continue to see closings & restrictions on hours of nonessential businesses in certain cities & states. But that is NOT marshall law.” Mr. Rubio later acknowledged his misspelling of martial law, but called it “marital” law.

The problems in Champaign began when Ms. Feinen included in materials for the City Council a section of municipal code that has been on the city’s website since at least 2006, granting the mayor wide latitude to respond to disasters such as tornadoes and riots. The section, used by the State of Illinois and other jurisdictions, contains 30 different provisions allowing a mayor to ration food and gasoline, enforce curfews, cut off utilities, and “order the discontinuance of selling, distributing, dispensing or giving away of explosives or explosive agents, firearms or ammunition of any character whatsoever.”

The mayor was chiefly concerned with such mundane items as closing the firehouse to public tours, giving the city manager broader authority to manage staffing, and buy supplies like face masks. But the code provided for far more than that.

Ms. Feinen posted all the materials, including the code, to the city’s website on Thursday night, in preparation for a required City Council approval vote Friday morning. Then she went home, thinking, “I’m pretty proud of us,” she said. “Instead of just referring to the code, we attached it, so people could see it.”

By Friday morning, the N.R.A. had sent an alert, “Champaign, IL First Locality to Use ‘Emergency Powers’ to Ban Gun Transfers,” and urged members to “swiftly” oppose it.

Phones rang off the hook at City Hall, and “our social media just started blowing up,” Ms. Feinen said.

Stories about the gun provision were picked up by The Daily Caller, Breitbart News and several gun-rights and far-right conspiracy websites. Donald Trump Jr., tweeted about it. Rumors based on the N.R.A.’s alert circulated on social media; one user wrote “WHEN TYRANNY BECOMES LAW, REBELLION BECOMES DUTY.” A friend of Ms. Feinen called her to report that sales of ammunition (and toilet paper) were booming at a local store.

Ms. Feinen emphasized that some comments and calls were from Champaign residents, legitimately confused and concerned by the sweeping provisions.

“I am a small government person. I understand that when you see it in a vacuum it’s very scary,” she said. “I also know that in a pandemic you need to protect health and safety and be proactive.

“I wasn’t trying to give myself a crown.”

The city of Champaign posted a clarification on its Facebook page reading, “There is currently no firearm ban and no intent to seize property or close businesses. Additionally there are no restrictions on the sale of alcohol or gas or the ability to enter or leave Champaign.”

“Some mayor and city council members are asking to get tarred and feathered,” wrote one commenter.

Ms. Feinen said: “Our staff was working around the clock to get accurate messaging out, but people weren’t paying attention to it. Whether or not someone’s angry with the mayor pales in comparison.”

City staff members worked all weekend to quell the uproar, in between preparing for statewide school, restaurant and bar closures ordered by Gov. J.B. Pritzker, a Democrat.

Champaign County on Sunday announced its first coronavirus case, a woman in her 60s who is recovering at home, Ms. Feinen said.

“So we weren’t out of line, being prepared,” she said. But it is strange, she added: “The governor has the same powers. He implemented his emergency order, and nobody blinked.”