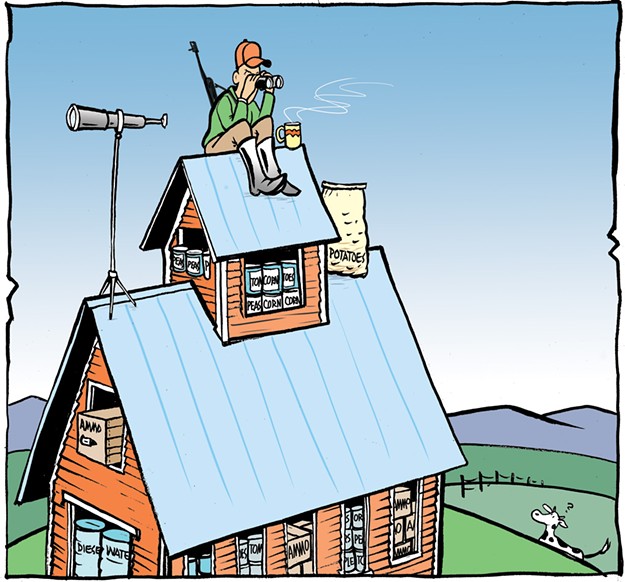 Henry Parro arrived at his central Vermont gun shop an hour and a half before it opened on Monday to do some paperwork. Ten minutes later, a car parked outside and waited.

“Once they saw that I wasn’t going to open the door, they apparently went and got a coffee,” said Parro, 61, who has owned Parro’s Gun Shop and Police Supplies in Waterbury since 1983.

When the shop finally opened at 9 a.m., the same car was back in the lot. Another was waiting close by.

Speaking to Seven Days by phone not long after, Parro counted more than a half dozen people perusing his collection within 15 minutes of opening the doors — a stream of customers that has held steady over the last week since “all hell broke loose.”

In the age of coronavirus, people are stocking up on more than just toilet paper and hand sanitizer. Gun store owners around the country are reporting a considerable uptick in sales as Americans grapple for the first time with the reality of living through a global pandemic. Unsure of what lies ahead, many are arming themselves.

“People are fearful they could be isolated,” Parro said. “They’re fearful that if things got really bad, they would not have a firearm to protect themselves and their family.”

Specific data about national sales won’t be available for a few weeks, but already this year, Federal Bureau of Investigation background checks for gun purchases across the country are up almost 350,000. Vermont has seen a similar rise: The FBI reported 5,589 checks here in the first two months of 2019. A year later, that number jumped to 6,694.

While it’s common for gun stores to experience a spike in sales due to certain national events — school shootings, say, or during an election year — those “panic buys” are usually from established gun owners scooping up weapons such as AR-15s, said George Caldwell, owner of 802FIREARMS, an online and appointment-only gun store in South Burlington.

Many of Caldwell’s recent customers, meanwhile, are first-time gun owners looking to “take their security into their own hands,” he said. He guessed that was why he was selling more handguns than long guns right now: pistols are “more familiar” to the average person.

“A handgun is good for personal protection,” the 32-year-old store owner said.

David Pidgeon, 79, who owns Pidgeon’s Gun Shop in New Haven, reported a similar run on handguns. Ammunition, too, he said, especially the kind typically used in pistols and assault-style rifles.

“I’ve talked today with my wholesalers, and they have none in stock,” Pidgeon said.

To be sure, gun shops always see a jump in sales during tax return season, when people have more disposable income to spend. But the Vermont shop owners opined that coronavirus has undoubtedly sparked more sales. Parro had an idea why.

“The news media: They’re not helping things,” he said. “They’re creating the fear.”

One might assume Parro would be thankful for the business boon. But not when “it’s for the wrong reason,” he said. Buying sprees are usually followed by a slow few months, he said, which is why he’d prefer “a nice steady month, not these huge ups and downs where things are crazy.”

Parro confirmed that he’s also spoken to more first-time gun buyers in his store, including some he describes as people who were previously “anti-Second Amendment.” That hasn’t sat well with the long-time shop owner, who criticized these buyers for “voting away my rights” and then “setting their anti-gun views aside to protect their family.”

“Now that you think your family is more important than mine, it’s OK?” he continued. “It’s so hypocritical.”

That’s not to say, though, that their money is no good in his store.

Parro recalled only one other global event with similar conversion powers: Y2K. Six months into the year 2000, many people returned to sell back their weapons, he said.

“Then they go back to their anti-gun thoughts,” Parro said.

Guns and ammunition are far from the only items flying off the shelves due to the coronavirus hysteria. But few other industries have regularly sought to capitalize off fear like the gun industry and its biggest advocate, the National Rifle Association.

Caldwell, the South Burlington shop owner, said he prides himself on not actively seeking to take advantage of people’s vulnerability. He said he doesn’t advertise or push any sales for that reason.

But he conceded that fear will always be an unfortunate accelerant of the gun business: “In times of uncertainty, people like to take up arms.”

Parro agreed, though he argued that the gun industry is no different from any other. “Sales are motivated primarily by fear,” he said. “If we have a huge winter ice storm coming, people run out and buy generators, bottles of water.”

But while Caldwell and Parro are letting the market do the work, their Addison County counterpart has another idea. Pidgeon, who has been in business more than 60 years, laughed as he told Seven Days that he had been considering a new special: “With every new gun, a free roll of toilet paper.”