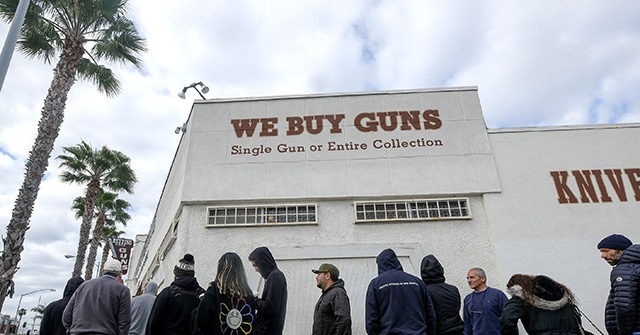 The National Rifle Association (NRA) notes that coronavirus shutdowns resulting in the closure of gun stores in various states demonstrate that gun controls the left once pushed as “reasonable” have become anything but.

The Democrats’ pet gun controls — waiting periods, universal background checks, etc. — are pushed again and again as common sense, “reasonable” solutions to keep guns out of the wrong hands. When the NRA and other gun rights groups push back, citing the opportunity for tyranny, they are shamed with accusations of being pawns of the gun industry.

But coronavirus shutdowns at the state level have cast a light on just how unreasonable waiting periods and universal background checks can be.

For example, on March 19, 2020, Breitbart News reported on the lines that stretched from inside to outside of certain California gun stores, lines of customers wanting to buy a gun for self-defense. The line was so long that some customers abandoned the effort. But for those who stuck it out, they made it all the way to the counter to learn that they could buy a gun but could not take possession of it until a ten-day waiting period had passed, per California law.

Ironically, all the “reasonable” gun controls now contribute to a scenario where law-abiding citizens cannot acquire firearms for self-defense.

It was with great foresight that the Founding Fathers included the phrase, “Shall not be infringed.”