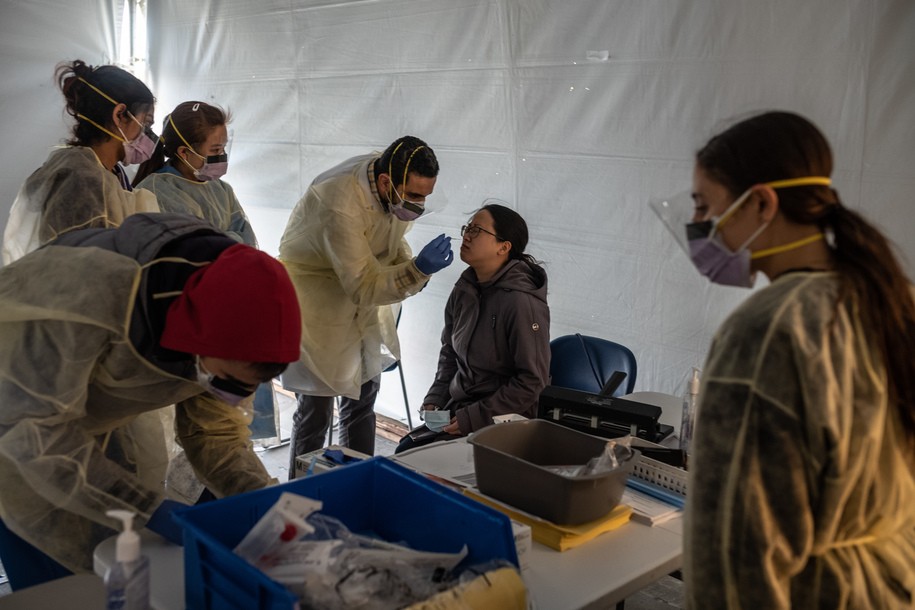 • Today saw the first unemployment numbers to give a glimpse of the economic turmoil already unfolding as the COVID-19 pandemic continues to expand throughout the country. Three million people filed for unemployment last week, a record number—and one that almost certainly will be revised upward still more.

• The Senate passed a $2 trillion economic stimulus package for the pandemic-stressed economy late last night in a 96-0 vote. The House plans a voice vote Friday to pass the measure; if Republican members object and demand a full vote, House Speaker Nancy Pelosi has indicated a willingness to change House rules to allow members to cast those votes via proxy so as to limit needed travel during the pandemic.

• Trump sent a letter to the nation’s governors indicating the administration intends to issue new pandemic policy guidelines and a classification of each individual county as “low,” “medium,” or “high” risk—a move that could be used to pressure governors to undo stay-at-home orders in regions that the Trump team itself believes are not at high risk.

• Economists are warning of “dire economic consequences” if Trump follows through with a plan to cancel “social distancing” measures prematurely. The damage to the economy, warns one, “would be hard to ever recover from.”

• The economic damage from the virus remains incalculable so far. Among the hardest hit are domestic workers being dismissed by households with little, or often zero, financial assistance. Small business owners are expressing urgent alarm to Congress: “We could use a lot of help right away.”

• Outgoing White House acting chief of staff Mick Mulvaney, who has still not testified to Congress for his role in extorting the Ukrainian government for Trump campaign help, had already received a coronavirus test before he appeared at CPAC in February. At the conference Mulvaney dismissed the emerging pandemic, saying the media was promoting the threat in another attempt to “bring down the president.”

• Patience may be wearing thin in the media for administration talking points blaming China and past administrations for the Trump team’s poor COVID-19 response.

• Refugees and asylum-seekers being held in federal detention continue to protest dangerous conditions in the facility. In Texas, ICE officials pepper sprayed as many as 60 detainees who were protesting after some among them came down with coronavirus-like symptoms. The government continues to resist the release of all but a handful of detainees.

• A Trump campaign attorney is demanding that television stations pull a Democratic superPAC’s ad collecting some of Trump’s most dismissive and false statements about the emerging pandemic. You can watch that ad here.

• A white nationalist who sought to bomb a Missouri hospital to mount a “revolt” against stay-at-home orders was killed in an FBI raid.

• The leader of the Trump cabinet’s Bible study group has written several blog posts and a “study guide” claiming that COVID-19 pandemic is due to God’s anger over homosexuality, environmentalism, and China.

• At least one station is discontinuing live coverage of Trump’s daily COVID-19 press conferences due to Trump’s continued use of the briefings to spread disinformation about the pandemic.

• The National Rifle Association is expressing outrage over gun stores being considered “non-essential” businesses by state and county shelter-in-place orders.

• The second dumbest man in Congress, Rep. Matt Gaetz, tweeted angrily that $13 million in pandemic relief is “going to Howard University,” a historically black college in Washington, D.C., instead of “going to families across the nation struggling to put food on the table,” and thus “does not belong in COVID-19 relief.” But the $13 million was actually allocated because the Howard University hospital has been designated a regional COVID-19 treatment center.

• How Trump could use the pandemic to win reelection.

• Some good coronavirus news, of a sort: In Kentucky, data clearly shows that early moves by Kentucky Gov. Andy Beshear “flattened the curve” in the state as intended, even as neighboring Tennessee saw cases skyrocket. Success in lowering the virus’ spread is being seen in other shelter-in-place regions, as well.

• Tech tools to stay connected during the pandemic.

• Resources for determining how the coronavirus stimulus can help you.