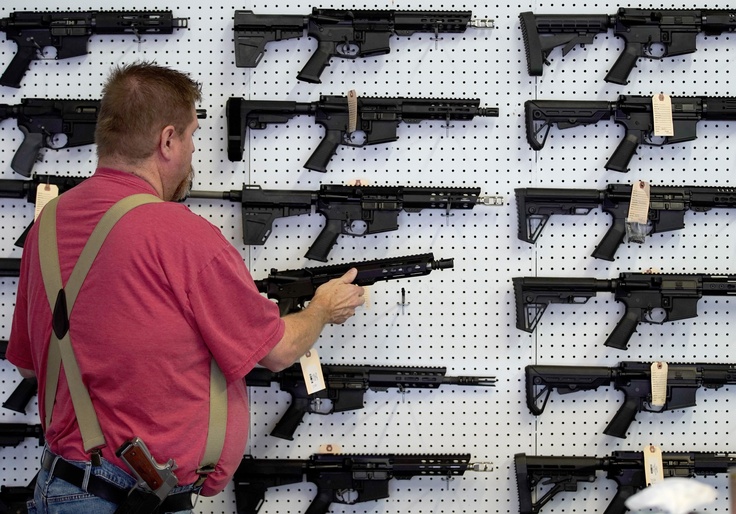 Gun sales exploded across the United States as the coronavirus pandemic spread, with retailers experiencing the highest sales volume in recorded history.

More than 2.5 million guns were sold in March as fears over the effects of the coronavirus spread, according to an analysis of FBI background check data released Wednesday by Small Arms Analytics and Forecasting (SAAF). The buying craze marked the busiest month on record for gun stores, even as some faced shutdown orders from state and local authorities. The record-setting monthly sales nearly doubled the 1.4 million guns sold in March 2019.

A separate analysis from the National Shooting Sports Foundation (NSSF), the firearms industry’s trade group, reached the same conclusion.“Our adjusted numbers are the largest month on record,” Mark Oliva, a spokesman for the group, told the Washington Free Beacon.

Concerns about the coronavirus—which has resulted in the release of certain prisoners, reduced enforcement of certain laws, and reduced police force numbers—drove Americans to their local gun stores and online ammunition dealers at a pace unseen before by many in the industry. The rush has been exacerbated in some states by the closure of gun stores. The high demand from Americans in the time of crisis has been repeatedly cited by gun-rights groups as they’ve sought to challenge shutdown orders in court.

Alan Gottlieb, founder of the Second Amendment Foundation, which has filed multiple suits against closures across the country, said he was not surprised by the record sales.

“This is no surprise,” he said in an email. “With a major uncharted health crisis that could result in a collapse of social order. With criminal inmates being let out of prison. With attempts to shut down gun stores and close down the ability of people to obtain firearms and ammunition for self-defense, [this is] what you would expect.”

Oliva said the numbers are proof more Americans than ever are putting a high value on their gun rights as the country faces the unknown.

“The figures are simply eye-popping,” he said. “Retailers have been telling us that the overwhelming majority of those buying firearms over the last month have been first-time gun owners. This puts to rest America’s thoughts on gun-control ideas.”

The SAAF and NSSF reports are based on raw numbers of background checks run through the FBI’s National Instant Criminal Background Check System (NICS). The groups use labeling by the FBI to determine which background checks are related to actual gun sales and which are conducted for gun-carry permits or other reasons. The results do not represent a one-to-one sales number because not all gun sales in the United States require a NICS check and some NICS checks can cover the sale of multiple firearms. It is, however, the most accurate estimate available since nearly all sales conducted by licensed gun dealers must go through a NICS check.

Jurgen Brauer, chief economist for SAAF, said that while the numbers were expected to show a large coronavirus-related sales boom, they also indicate that inventory is likely low across the firearms industry. He expects prices to spike in April as gun manufacturers and stores work to replenish the shelves.

“Much of the industry’s inventory will have been depleted, so that we anticipate that weapons and ammunition prices increased as well,” Brauer said in a statement. “The spurt in firearms sales in March 2020 was particularly notable for its handgun component: The ratio of handguns to long-guns sold now stands at a record 1.84, the highest ratio since the introduction of the NICS checks in late 1998.”

Oliva said the sales were evidence of how many Americans are preparing for whatever may come.

“Americans across the country chose to exercise their right to lawfully purchase a gun when their safety became more than a rhetorical question,” he told the Free Beacon.

Editor’s Note: This piece was originally published at 5:20 p.m.