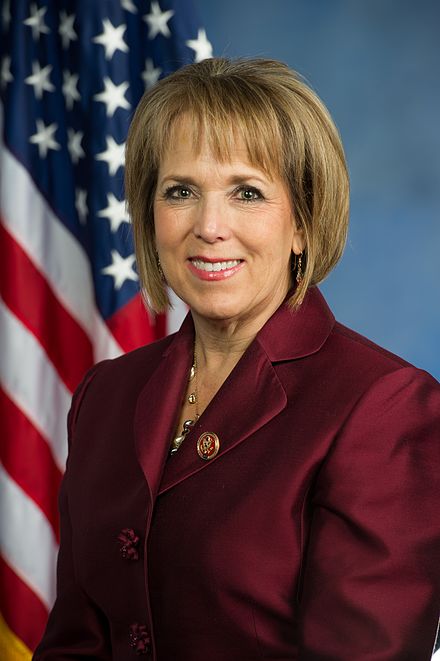 Aside from the fact that all governors have unprecedented burdens ahead of them in this pandemic, trying to make for Covid failures from the Trump administration and that dealing with a federal lawsuit of this level of epic stupidity is a waste of my governor’s time:

I think this is all badge of honor for her and her administration. Maybe a federal judge or a federal appeals court could take it one step further after ruling in her favor, and shut down the National Rifle Association. It is really quite straightforward: Governors and states have powers that are specifically spelled out in the Constitution; that is the core of the 9th Amendment but maybe these NRA/2nd Amendment folks stopped reading at the end of the 2nd amendment, and never got to the 9th Amendment?

New Mexico’s Governor Michelle Grisham Lujan recently sealed gun shops as non-essential businesses, which were required to be closed, along with pay-day loan companies, liquor stores, and a few other unsavory venues that I personally wish would be permanently closed. Pay-day loan shops being shuttered is something friends of mine in the New Mexico legislature have been trying to achieve for many years because they victimize poor people (and yes, we have a lot of poor people in New Mexico) by charging rates that go beyond usury at even higher rates than Mafia loans.

All of this is so reminiscent of the fate of some of my own consumer-protection initiatives that failed in the legislature because of the legislative hit-men and overpaid corporate lobbyists. It also makes me think back to 2006, and of the 16 years it took one kindhearted animal-lover state senator, Mary Jane Garcia, to get cockfighting banned in the state of New Mexico (Massachusetts was the first to ban it back about 1846).

The raw news behind this article, compiled from the Santa Fe New Mexican article by Phaedra Haywood:

The National Rifle Association and firearms-related businesses and advocacy organizations have filed a federal lawsuit against Gov. Lujan Grisham over her Executive Order to close gun shops and shooting ranges as a part of her larger effort to prevent the spread of COVID-19, filed Friday in U.S. District Court in Albuquerque.

The suit states: “By arbitrarily, capriciously and unconstitutionally targeting those who lawfully sell firearms and ammunition, New Mexico is depriving citizens of their natural and fundamental right to keep and bear arms. Uncertain times are precisely when fundamental rights like the right to keep and bear arms for self-defense must be protected.”

The plaintiffs include such pillars of progressive thinking as New Mexico Shooting Sports Association President Zachary Fort; David Anthony Segura, a firearms instructor for the New Mexico Department of Public Safety; and Richard Kennedy, owner of Southwest Gunsmith Technologies in Moriarty. Roses’ Guns and More in Moriarty, the Second Amendment Foundation and the Firearm Policy Coalition joined the NRA in bringing the lawsuit, which further names the state Department of Health and Health Secretary Kathy Kunkel as defendant.

They ask the court to find that firearms and ammunition makers and dealers and shooting ranges are “essential” businesses and must be allowed to operate during the pandemic, and asks a federal judge to find the governor’s public-health order directing them to close unconstitutional. The plaintiffs wish to be awarded unspecified damages and legal fees.

Asked to comment on the lawsuit, Lujan Grisham spokeswoman Nora Meyers Sackett said in an email the state “has taken and will continue to take an extremely broad view of what is considered non-essential to public health amid this pandemic. Gun stores are hardly the only entity having to adapt as we work to stem illnesses and prevent deaths,” Sackett wrote.

“No one is happy about closing in-person business in our state no one, including the governor,” Sackett continued. “But it is inarguable that the only way we get through this pandemic with the fewest number of deaths that we can manage is to limit travel outside of the home to the greatest extent possible and while we as an administration unequivocally support the constitutional right to purchase a firearm, we recognize that right does not correspond to a right to congregate in a store and infect neighbors and workers and public-safety officers amid an unprecedented global pandemic.”

I was curious as to what kind of media coverage on this is going on outside of the small-town local newspapers, and I found lots of coverage in the right-wing gun world on this “Malevolent Michelle” Bullsh*t.

Read on, please, to learn how little actual journalism is going on here, beyond just publishing the entire NRA press release:

Early in the 2016 Primary campaign, I started a Facebook group: Bernie Sanders: Advice and Strategies to Help Him Win! As the primary season advanced, we shifted the focus to advancing Bernie’s legislation in the Senate, particularly the most (more…)