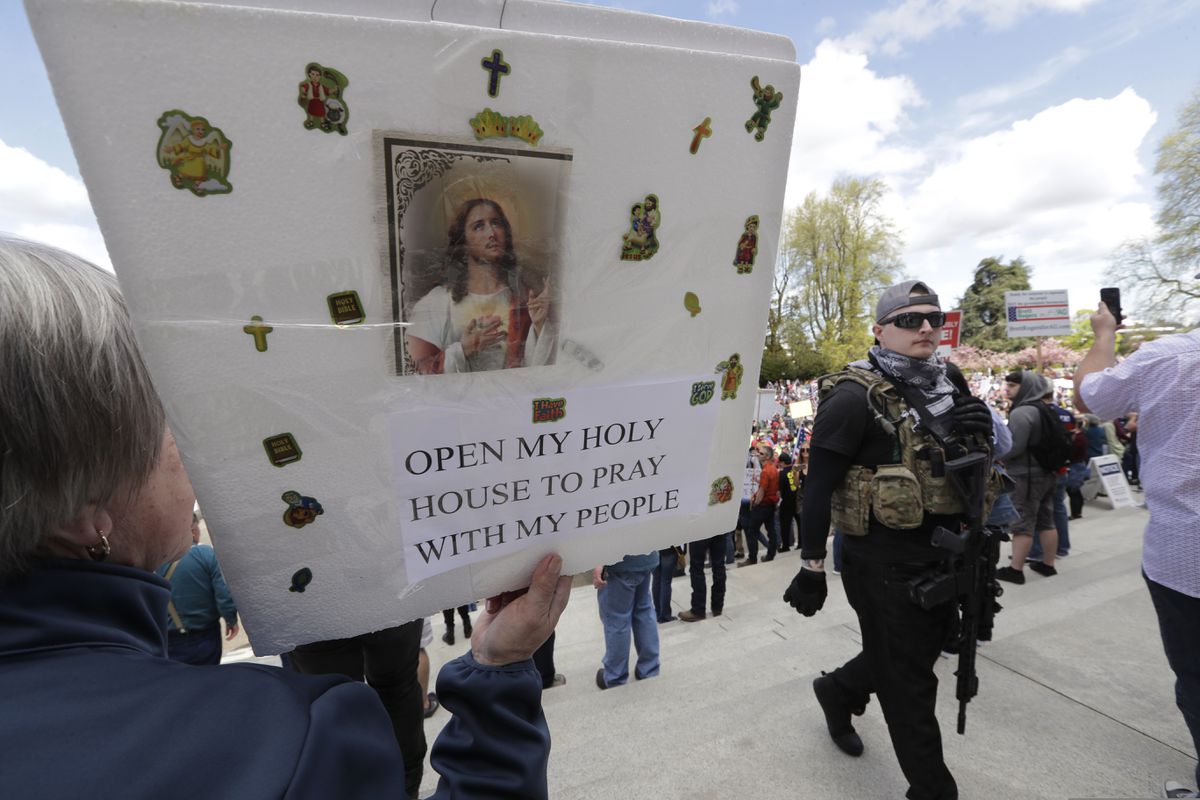 A trio of far-right, pro-gun provocateurs is behind some of the largest Facebook groups calling for anti-quarantine protests across the country, offering the latest illustration that some seemingly organic demonstrations are being engineered by a network of conservative activists.

The Facebook groups target Wisconsin, Ohio, Pennsylvania and New York, and they appear to be the work of Ben Dorr, the political director of a group called Minnesota Gun Rights, and his siblings Christopher and Aaron. By Sunday, the groups had more than 200,000 members combined, and they continued to expand quickly, days after President Donald Trump endorsed such protests by suggesting citizens should “liberate” their states.

The online activity implies that opposition to the restrictions is more widespread than polling suggests. Nearly 70% of Republicans said they supported a national stay-home order, according to a recent Quinnipiac poll. Ninety-five percent of Democrats backed such a measure in the survey.

The Facebook groups have become digital hubs for the same sort of misinformation spouted in recent days at state capitols – from comparing the virus to the flu to questioning the intentions of scientists working on a vaccine.

Public health experts say stay-home orders are necessary to slow the spread of the novel coronavirus, which has killed more than 35,000 people in the United States. The Trump administration last week outlined three phases for states to reopen safely – guidelines contradicted by the president when he urged citizens to rise up against the rules that heed the recommendations of his own public-health advisers.

“If people feel that way, you’re allowed to protest,” Trump said Sunday. “Some governors have gone too far, some of the things that happened are maybe not so appropriate.”

Facebook said Sunday that it did not plan to take action to remove the groups or events, partly because states have not outlawed them. Organizers also have called for “drive-in” protests, in keeping with recommendations that people keep a short distance between one another. In other cases, involving protests planned for states such as New Jersey and California, the company has removed that content, Facebook said.

“Unless government prohibits the event during this time, we allow it to be organized on Facebook. For this same reason, events that defy government’s guidance on social distancing aren’t allowed on Facebook,” said Andy Stone, a spokesman for the company.

None of the Dorr brothers responded to calls and emails Sunday.

The online coordination offered additional clues about how the protest activity is spreading nationwide, capturing the imagination of the president and of Fox News even though it represents the views of a small minority of Americans. Trump himself tied the protests to gun rights – a major cause for the Dorr brothers – in telling Virginians that the Second Amendment was “under siege” as he urged them to “liberate” the state.

On the ground, pro-Trump figures – including some who act as surrogates for his campaign – as well as groups affiliated with prominent conservative donors have helped organize and promote the demonstrations.

Some of the most vehement protest activity, in Michigan, has been organized by the Michigan Conservative Coalition. Its founders are a Republican state lawmaker and his wife, Meshawn Maddock, who sits on the Trump campaign’s advisory board and is a prominent figure in the Women for Trump coalition. Jeanine Pirro, a Fox News host and avid Trump supporter, interviewed Maddock on her show Saturday, telling her, “Keep going. Thank you.”

Also promoting the demonstrations – including spending several hundred dollars to advertise the event on Facebook – was the Michigan Freedom Fund, which is headed by Greg McNeilly, a longtime adviser to the DeVos family. He served as campaign manager for Dick DeVos, the husband of Education Secretary Betsy DeVos, when he ran unsuccessfully for governor of Michigan in 2006.

The state’s Democratic governor, Gretchen Whitmer, who has become a target for Trump and his conservative allies, last week criticized the nonprofit, noting that it was “funded in large part by the DeVos family,” and saying it was “really inappropriate for a sitting member of the United States president’s Cabinet to be waging political attacks on any governor, but obviously, on me here at home.”

McNeilly said the funds used to promote the event were “not dedicated program funds” but instead came from “our grass-roots fundraising efforts,” and so had “nothing to do with any DeVos work.”

The Dorr brothers manage a slew of pro-gun groups across a wide range of states, from Iowa to Minnesota to New York, and seek primarily to discredit organizations such as the National Rifle Association as being too compromising on gun safety. Minnesota Gun Rights, for which Ben Dorr serves as political director, describes itself as the state’s “no-compromise gun rights organization.”

In numerous states, they have bypassed rules requiring them to register as lobbyists by arguing that they are instead involved in “pro-gun grassroots mobilization,” as “Ohio Gun Owners,” whose board Chris Dorr directs, describes its work.

A now-retired state legislator in Iowa, who in 2017 sought to close a loophole allowing the brothers to skirt lobbying rules, said he was not surprised that the Dorr brothers were involved in fomenting resistance to the public health precautions.

“The brothers will do anything to fan the flames of a controversial issue, and maybe make a quick nickel,” said the former state legislator, Republican Clel Baudler.

Nearly 97,000 people had joined Wisconsinites Against Excessive Quarantine by Sunday afternoon, a Facebook group whose posts are visible only to members that said Democratic Gov. Tony Evers has been on a “power trip, controlling our lives, destroying our businesses” and “forcing us to hand over our freedoms and our livelihood!” In the group, some members speculated that Evers closed most state businesses and shuttered schools to appease pharmaceutical giants – not because of data showing that the novel coronavirus is highly contagious and deadly, infecting more than 4,300 in the state and killing 220.

The group, along with Ben Dorr, created an event on Facebook for an April 24 “drive-in rally” at the Capitol that has attracted hundreds of pledged participants. They also seek to steer visitors to a website for the Wisconsin Firearms Coalition, where people can enter their names, email addresses and other contact information and share their views with the state’s governor. In doing so, they encourage visitors who are not “already a member of the Wisconsin Firearms Coalition” to “join us.” A page asking users to join the Minnesota group offered several rates for membership, from $35 to $1,000.

Another private Facebook group focused on Pennsylvania, gaining more than 63,000 members by Sunday. Many questioned the wisdom of wearing masks publicly, contrary to recommendations by state and federal officials, and linked to a similar website catering to Pennsylvania gun owners. Still another targeting New York had become a forum for about 23,000 members to question whether the coronavirus is really that bad – despite the fact New York City has become the epicenter of the U.S. outbreak.

“While seizing power at a breathtaking pace,” the group’s description began, “Andrew Cuomo is sending NY’s economy into a death spiral!”

Dozens of other Facebook pages, groups and events similarly promote protests targeting stay-home orders in state capitals nationwide. Permitting some of this content – including coordinated efforts on the part of conservative activists – marks a break with Facebook’s strict new rules governing content about the pandemic.

Since the outbreak began, the tech giant has barred a wide array of false or misleading posts, photos and videos, including those promoting cures that do not exist. The company also has deployed its fact checkers to debunk dangerous myths about the pandemic and its origins, and it has warned people about their interactions with online misinformation. Guiding Facebook’s approach – more aggressive than it typically takes even against known falsehoods – is a belief that it must stop the spread of dangerous mistruths on the platform amid a global health crisis.

Many governors, however, have decried protests to open up the country as precisely that – potentially harmful to the people who attend the demonstrations and to the many more who are following guidelines and staying at home.

“I don’t think it’s helpful to encourage demonstrations and encourage people to go against the president’s own policy,” Maryland Gov. Larry Hogan, a Republican, said this weekend. “It just doesn’t make any sense.”

Representatives for the governors of New York, Wisconsin and Pennsylvania did not respond to requests for comment. A spokeswoman for Ohio Republican Gov. Mike DeWine said he has “acknowledged that the protesters have a First Amendment right to free speech,” adding: “He just asks that they practice social distancing.”

Alex Stamos, director of the Stanford Internet Observatory and Facebook’s former chief security officer, said the groups constitute a form of domestic disinformation because they were being operated by users with financial and political motivations to sway public debate in unauthentic ways. He was especially alarmed by the possibility that the group’s creators were deriving personal benefit by stoking online anger about the public health measures.

“It’s always scams that drive the most ingenuity,” Stamos said.

Zachary Elwood, a software engineer in Portland, Oregon, who blogs about disinformation and tracked some of the activity by the Dorr brothers, urged Facebook to crack down on small clusters of users coordinating seemingly disparate activity, especially when the activity involved harmful untruths.

“It’s understandable that people are upset about the difficult situation we’re in, but they’re clearly being riled up by people with an obvious anti-government agenda,” Elwood said. “Facebook shouldn’t make it so easy to do that.”