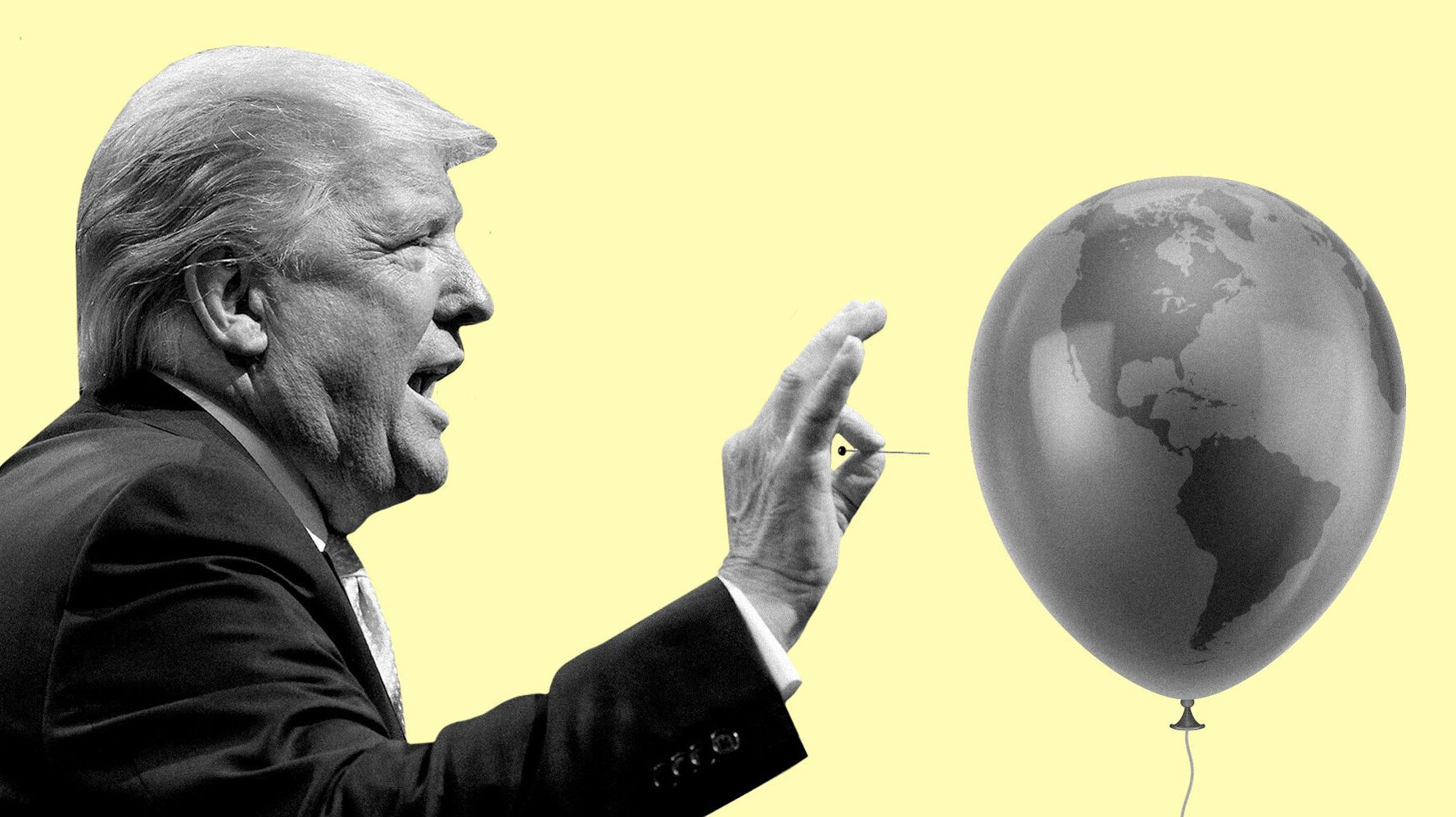 But who knew there would be actual bats involved?

Fifty years later, the COVID-19 pandemic is the starkest example of natural disasters foretold but not prepared for.

The destruction of unique habitats, logging of rainforests and consumption of displaced wildlife such as bats, chimps and endangered pangolins has led to most of our recent viral outbreaks, from AIDS and Ebola to the coronavirus. This only confirms the scientific consensus that human health and prosperity depend on a healthy environment.

The John Birch Society, a fringe, right-wing political advocacy group known for peddling conspiracy theories, claimed the first Earth Day was a veiled attempt to celebrate Russian communist revolutionary Vladimir Lenin’s birthday. The reality is that a growing cross section of the American public had become increasingly concerned about air and water pollution, driven in part by the Santa Barbara oil spill and the Cuyahoga River fire the year before.

Until Earth Day 1970, industrial contamination simply hadn’t been on the radar of traditional conservation groups, which traced back to the wilderness protection efforts of Republican President Teddy Roosevelt.

Who knew there would be actual bats involved?

Today, the United States, once a leader in environmental stewardship, is led by a Republican president and Senate majority doing all they can to dismantle the nation’s green legacy and sell it off for parts. That includes prioritizing oil and gas production, loosening clean air and water rules, and rolling back auto emissions standards as a deadly virus that attacks the lungs is wreaking havoc around the world.

On the 50th anniversary of Earth Day, it’s worth reflecting on how we got from there to here.

From “Wise Use” To The White House

In 1988, a fringe group of anti-government organizations launched the “wise use” movement, which put out a 25-goal manifesto the following year. At the top of the list were opening up the Arctic National Wildlife Refuge to oil drilling and the Tongass National Forest, in southern Alaska, to logging. The Trump administration has plans to do both.

In my 1994 book, “The War Against the Greens,” I identified the links between this anti-environmental backlash and industry efforts to establish the pro-corporate grassroots “astroturf” campaigns for “wise use” and “property rights” that exploded onto the scene between 1988 and 1995.

Without popular support, they still managed to stymie public lands reforms under the administrations of both Presidents George H.W. Bush (R) and Bill Clinton (D), often physically threatening green activists and federal employees. The illusion of a spontaneous anti-green citizen movement also attracted some notable media support. An environment reporter for The New York Times even referred to them as “mom and pop community environmental groups” in a discussion.

In the Trump administration, 15 of the top 20 environmental managers have direct ties to the fossil fuel industry.

Its real proprietors included mining companies, the timber and cattle industries, off-road vehicle manufacturers, the National Rifle Association and Exxon, with support from allies in real estate, development, and conservative think tanks like the Heritage Foundation and the American Legislative Exchange Council.

The wise use movement achieved quite a bit: A mining law virtually untouched since 1872 allows companies to lay claim to U.S. public lands for less than $5 an acre, without paying royalties on the $400 billion they’ve extracted to date; the cost of grazing permits for cattle have dropped to a new low monthly rate of $1.37 per animal per acre under Trump versus $22.60 average per animal per acre on private Western lands; and federal agencies are selling off public timber and opening up more land for oil and gas pipelines.

“If the troubles from environmentalists cannot be solved in the jury box or at the ballot box, perhaps the cartridge box should be used,” James Watt, who had headed up the Department of the Interior under President Ronald Reagan, said during a Wyoming Cattlemen’s Association meeting in 1991.

Fast-forward 28 years to Trump naming William Perry Pendley, the long-time president of the right-wing nonprofit Mountain States Legal Foundation, to lead the federal Bureau of Land Management. The foundation, which Watt founded, has long identified itself as “the litigation arm of the wise use movement.” As BLM’s acting director, Pendley is in charge of managing one-third of all federal land ― land that Pendley has long advocated selling off.

Pendley is not new to the D.C. swamp. In 1981, Watt recruited him to serve as his assistant secretary for energy and minerals. Their tenure included the largest public coal sale in history in the Powder River Basin of Montana and Wyoming.

Once a leader of the wise use movement, Pendley now prefers to link himself with the earlier, less violent Sagebrush Rebellion movement of the 1970s and ’80s, which also worked to transfer control of western lands from the federal government to the states (and was ultimately unsuccessful).

In many hectoring lectures over the years, Pendley has repeated a common wise use conspiracy theory that the Endangered Species Act is “rural genocide” meant to drive residents off the land and into cities “where they can be better controlled.” He’s also repeatedly talked about the “shoot, shovel and shut-up” approach to endangered species, and in a 2014 opinion piece in the National Review, expressed sympathy for Cliven Bundy and his cowboy militia in their armed standoff with BLM law enforcement in Nevada.

Earth Day 1970 was the launching pad for much of what Pendley and the wise use movement came to detest, including the Endangered Species Act and other keystone environmental laws and reforms. It also led to public investments in water treatment, waste management, air pollution reduction and wildlife protections that have had positive impacts on nature and U.S. public health. And it sparked an environmental justice movement recognizing that big polluting industries disproportionately affect low-income communities of color.

One region where those changes held less sway was the rural West, which the Economist magazine described in 1993 as having “tempered rugged individualism with socialist infrastructure.” There, the federal government provided below-market subsidies for public lands industries, including hard-rock, coal and uranium mining; timber harvesting; and livestock grazing.

When the wise use movement was launched at a conference at the Nugget Hotel in Reno, Nevada, in 1988, co-founders Ron Arnold of the Center for the Defense of Free Enterprise and Chuck Cushman of the American Land Rights Association said it was their fear that Bush would make good on his commitment to become “the environmental president.”

Shortly after taking office, Bush mollified anti-environmentalists’ concerns by appointing arch conservative John Sununu as his chief of staff. After wise use members coordinated angry local rallies and demonstrations in 1991 against a National Park Service plan to protect the ecosystem surrounding Yellowstone, it was Sununu’s lobbying that ultimately killed the plan. Sununu also prevented the United States from entering into a global climate treaty that could have given the nation a decades-long lead on addressing the climate emergency, over objections from EPA Administrator William Reilly.

The wise use rhetoric and intimidation continued to escalate in the 1990s, targeting forest activists and others. In Nevada, a Forest Service district ranger’s home and office were pipe bombed after he ordered cattle taken off National Forest land to improve the habitat. (He wasn’t home at the time but his wife and daughter were.) Diane Wilson, a shrimper who opposed the expansion of a plastic factory in Texas, also faced retaliation: Her dog was shot and her boat was sunk.

It was also during the 1990s that wise use and other anti-government groups began to converge around the emerging militia movement, including the National Federal Lands Conference, which argued that county sheriffs should arrest federal employees enforcing environmental rules. In April 1995, Timothy McVeigh, an anti-government-militia sympathizer, bombed a federal building in Oklahoma City, killing 168 people and injuring hundreds more.

After Oklahoma City, some corporate sponsors of the movement began to fear that they’d created a Frankenstein’s monster. Wise use lost almost all of its industry backing and went into rapid decline, while some of its more presentable members found new gigs with incoming Republican administrations. Gayle Norton, who began her career at Mountain States Legal Foundation, became George W. Bush’s interior secretary. Myron Ebell, a former lobbyist for Chuck Cushman, found a home at the Competitive Enterprise Institute and later led the Trump administration’s transition team for the EPA.

The Bush administration represented a shift in focus for the pro-development crowd, from Western mining and timber to a more broadly petroleum-centric agenda. Vice President Dick Cheney was a main advocate, leading closed-door energy policy meetings and the post-9/11 push for war in the oil-rich nation of Iraq. (Today the U.S. also occupies oil fields in northern Syria.)

Those interests had their own front groups, including the Greening Earth Society, which saturated media and congressional hearings with hand-picked and industry-funded climate skeptic scientists like Fred Singer and Republican pollsters like Frank Luntz who could generate public uncertainty about the growing scientific consensus on human-driven climate change.

The GOP had effectively established anti-environmental rhetoric and climate denial as litmus tests for leadership by the time the Supreme Court ruled in 2010 that there should be virtually no limits on corporate election spending.

A purge of environmental moderates was already underway. Today, finding an environmental Republican in Congress is like finding an ivory billed woodpecker in Central Park. When Trump insists that “global warming is a total and very expensive hoax” or claims that wind turbines cause cancer, he is very much keeping with party orthodoxy.

And yet, popular attitudes and market forces continue to shift in favor of a rapid transition to renewable energy. Polls indicate that young people of all parties strongly support environmental stewardship. A new determination and bravery has also suffused the environmental movement since the indigenous-led Standing Rock pipeline protests of 2016 and student climate strikes of 2019.

Protecting the environment has become one of the defining issues of the 2020 election ― or had, before the coronavirus outbreak at least ― with nearly two-thirds of Americans rating it a top policy priority, according to polling by the Pew Research Center. At the same time, the backlash has consolidated both within the Republican Party, and across the globe: Hundreds of environmental leaders have been murdered across the globe over the last five years. Beyond the U.S., climate deniers have reached the highest elected offices in major global powers, including those with hugely important public lands like Australia and Brazil.

So, with polar ice melting, a pandemic expanding and climate-driven storms and wildfires raging, the 50th anniversary of Earth Day could be the final test of citizens’ commitment to protecting and restoring our blue marble planet.